I love the feeling to be able to use my pilot license for real useful things. Useful things like going from A to B and from B back to A, in minimal time and with the reasonable certainty to get there as planned. So I put my FAA Private Pilot License with IFR rating to test on this real life, real business flight with a colleague as a passenger. Of course I choose the Mooney to be our companion. Let’s say that it worked out for 75% …

We were expected to be in Karlsruhe, Germany, for a three days business meeting. So I choose to fly on the international airport of Karlsruhe/Baden-Baden (EDSB), near to France and on the banks of the Rhine river. The Mooney was just out of annual maintenance at Qualiflight at Kortrijk-Wevelgem International Airport (EBKT), near home, so that made things more convenient.

I prepared the trip extensively. I checked the weather a long time beforehand via the EuroWX and Belgocontrol websites. I had downloaded FlighPlanPRO (see actual screenshot below), a great and free tool to construct European IFR flightplans that pass the mythical CFMU flight management computer in Brussels. Peter guided me via his website to this tool, and also to Eurofpl, another great and free website to check, file and track IFR flightplans in Europe. I printed also all recent Jeppesen approach charts 25 miles around my intended flightpath. All this preparation led to the following two flightplans: 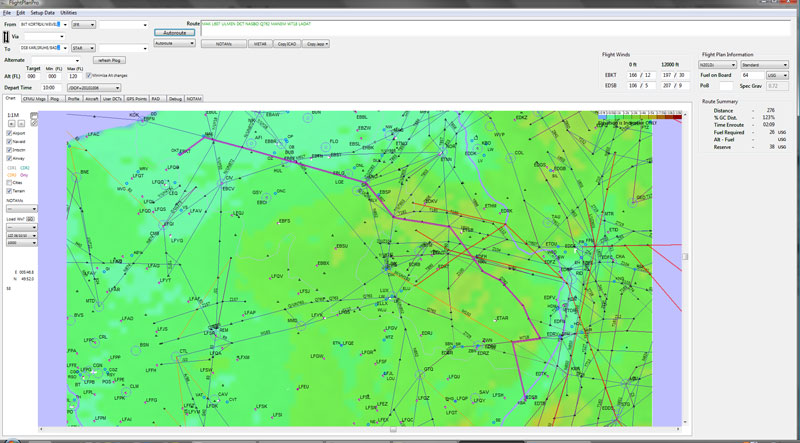 The Eurofpl website also generates a navigation log based on the current weather: at least some part of general aviation in Europe that gets more easy !

A couple of days before this flight, I wanted to fly the Mooney with some friends. However, when starting the engine and following the checklist, I noticed that the ammeter showed a discharge although the engine ran and the alternator should be online. So I had to cancel that flight as I did not want to risk the battey running dead on me. I was glad that my checklist discipline helped me finding this problem as the weather turned bad after a while. An IFR approach without battery sounds like a silent “mayday” to me. Anyway, it turned out that a alternator wire was loose, stopping the alternator from charging the battery. It was repaired in time before this flight to Germany.

The weather prediction for the trip towards Karlsruhe looked perfect: CAVOK. However, the day before the actual flight was very misty in the morning. The visibility remained bad until 11am. I hoped this phenomenon wouldn’t pop up the day after … The weather for the return flight, however, showed a more challenging pattern: a cold front was predicted to pass the night before through my intended route of flight, so I expected lingering clouds, but nothing to be worried about.

Eurofpl gave me via email and SMS the following message after I filed the flight plan:

That wednesday morning, we pulled the Mooney out of the hangar under a beautiful morning sun! We started up, fuelled and took off from runway 24 with a left turn to Mackel (MAK) NDB to join the L607 airway that is running west to east across petite Belgium. We climbed slowly to flight level 090 while in contact with Brussels Departure. There was plenty of traffic on the frequency: Ryanair at Charleroi-Brussels-South Airport (EBCI), Bee-line (Brussels Airlines) at Brussels International (EBBR) and some private jets taking off from Antwerp (EBAW). We were soon cleared direct GILOM, after that LNO and then onwards to GELPA on the border with Germany over the ‘Hoge Venen’. We could see all around us, visibility was great. Just in the Ardennes, there was some mist stuck in the valleys. The last controller in Belgium (Brussels Radar) was extremely busy, but as soon as we were transferred to Langen Radar, the frequency went very quiet. There was one or two airplanes on the frequency during the journey through western Germany. Soon we received a “direct ABKUT”, a nice long shortcut and in the STAR into EDSB. The best moment came when we flew accross Ramstein airbase at FL090, while two monstruous C.17 Globemasters slid deep below us on the ILS to Ramstein… Fantastic !

In the meanwhile, Eurofpl sent out the following emails to the recepients of choice:

After 1.5 hr we were transferred to Strasbourg Approach, French ATC governing a part of German airspace. We received clearance to descend, vectors towards the extended centerline and the clearance to intercept the ILS ro runway 21 in Karlsruhe. We actually captured the glideslope from above, which is unusual, so it took some time to get estblished on the glideslope. After a while, the airport and the PAPIs came into view. A good landing and a short efficient taxi towards the GAT parking, and we shut the engine down. Smooth flight – fantastic weather ! The GAT guy brought us in his car to the main terminal where we donned our rental car and drove via autobahn to our business meeting in Karlsruhe. All in all the fastest hop ever performed by my company between the HQ in Kortrijk and the factory in Karlsruhe ! 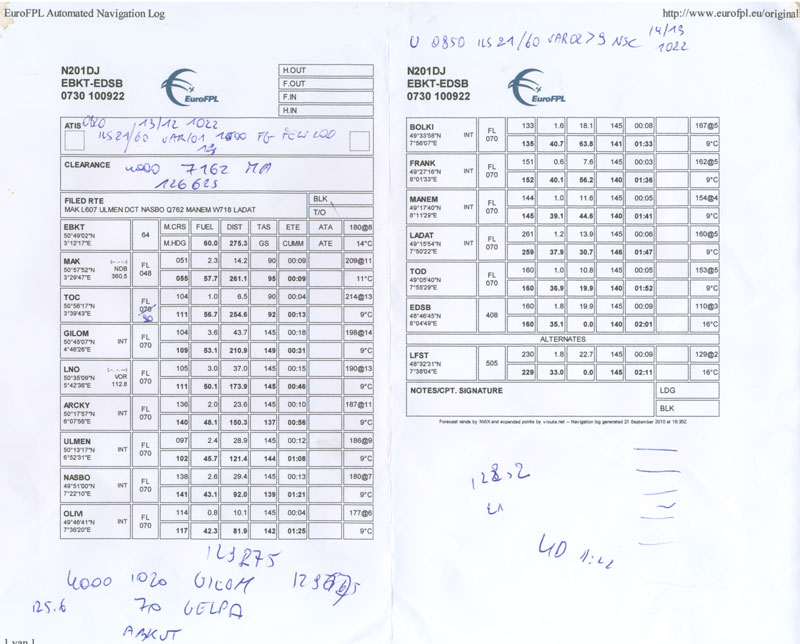 But then I started checking the weather for the return flight two days later. The bespoke cold front still featured prominently on every weather chart. Some charts showed it passing Karlsruhe before my intended flight home, others showed it lingering on and blocking the way. The closer we got to the actual planned take-off time, the slower that cold front moved … So we left our meeting in Karlsruhe in full sunshine with the dark clouds of the approaching cold front to our west. We refuelled the rental car and we were almost blown away by the gusting winds of the front engulfing the area. No way we would fly right now ! 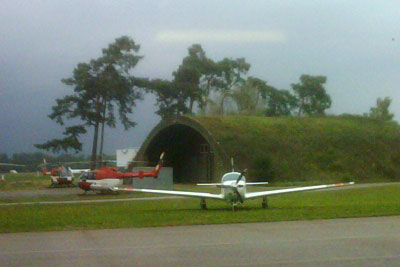 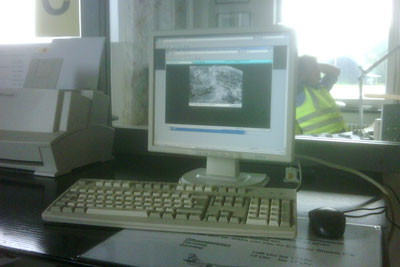 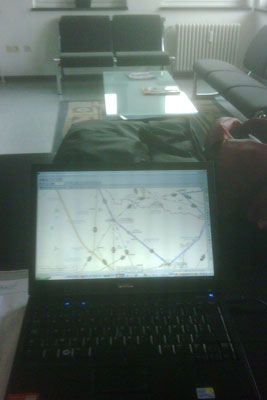 We entered the GAT building and the guy behind the counter looked troubled: “this doesn’t look good”. Right then it started downpouring. In no time, water was falling from the sky with buckets… The guy handed us the METARs and TAFs of the airports along our intended trip, and although the METARS didn’t look that menacing, the TAFs were long and calling for TSRA, TCU, and BR. I checked and rechecked the weather, charts and so on, and then reality was sinking in: this would be my second lay-over due to weather, and I proud myself it being a wise decision after all… Last time, we were stuck in the UK, now it was Germany … but that day was just no flying day, not even with an instrument rating through a angry cold front ! 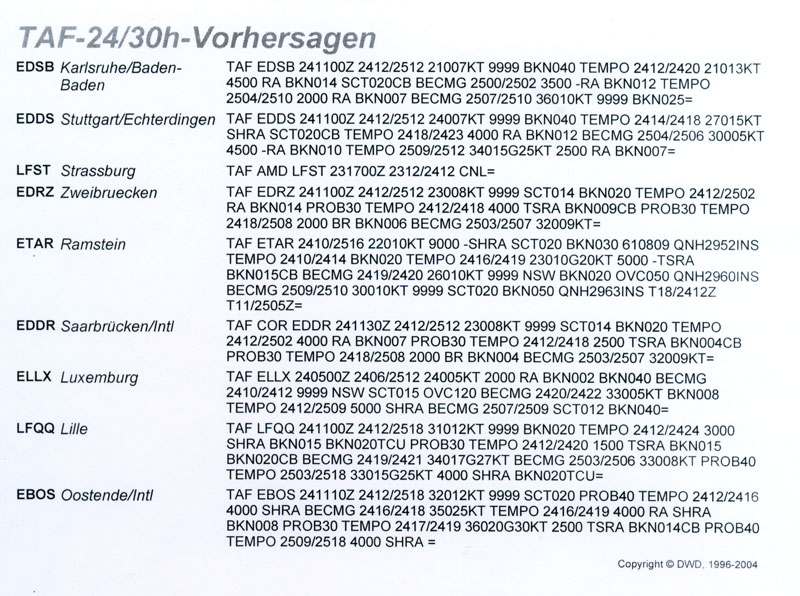 I urged my passenger to take the car back home as I wasn’t even sure I would get back the day after. And I settled in a cheap airport hotel. There I discovered how interesting this airport really is: it’s an old Canadian Air Force base, full with old aircraft bunkers. The airport has been reconverted to a civilian place and today it handles about 1 million passengers … but they never got rid of the sturdy bunkers … 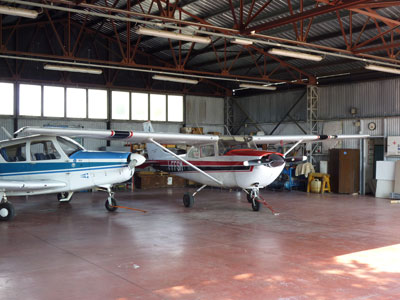 This bunker is named C26 and was right behind my hotel room. It still had the airplane smell and it featured some weird stickers bringing old and new military Germany together on an old bunker … 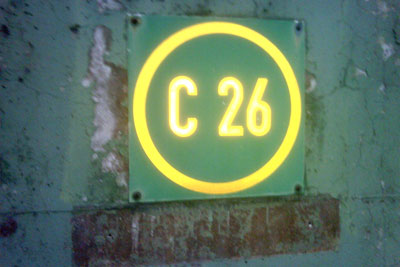 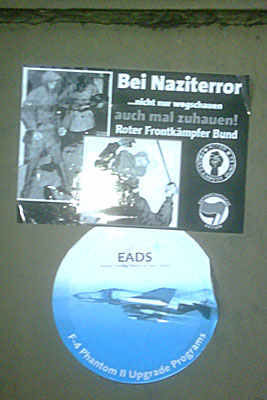 After a good night rest, I ventured back to the GAT terminal and checked the weather again. Although the METARs and TAFs still were long, the current weather picture, combined with info from the rainfall radar, visible satellite, weather charts etc, it looked like I would have a good chance to make it back home, albeit embedded in cloud. So I filed the flight plan, fuelled up and took off right into the clouds, and fully concentrated on my instrument scan. After the take-off clearance, Baden Tower said “good-bye”, a clear hint that I had to contact Strasbourg Approach as soon as possible when airborne as indicated on the chart. 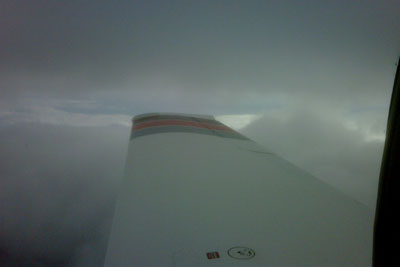 Oh man, how important that scan is while engulfed in white cloud … I was so happy to be sharp on instruments as my equilibrium wanted to make me believe that I was turning while I was not … I was about 35 minutes in full white cloud and I only started to break out when approaching AKELU near the Luxemburg border. After AKELU, I was handed over to Luxemburg approach for my crossing of this small country. I had asked to stay at FL070 for fear of icing when climbing higher. 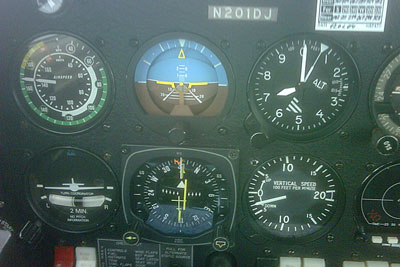 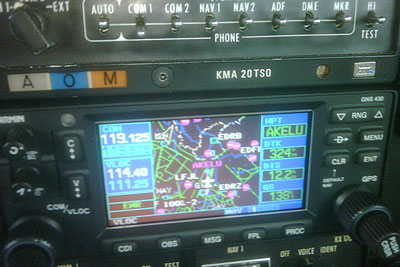 It was busy on the frequency. There were some private jets being vectored to the ILS of Luxemburg Airport. There was also a Scandinavian Airlines aircraft who contacted Luxembur approach, ending with the famous words “And we have Whiskey on board”, referring to the active ATIS message W (Whiskey). I am still wondering if they phrased it like this on purpose … 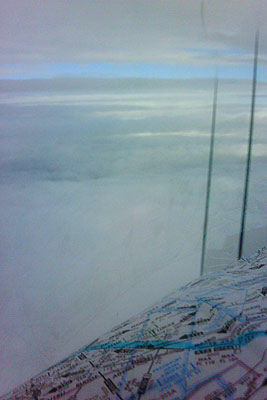 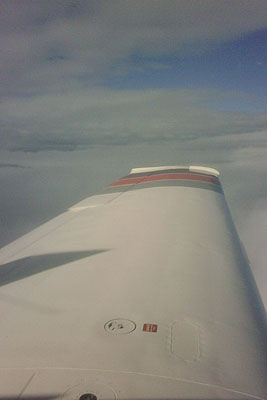 After DIK VOR, I received a “direct MAK”, a nice shortcut accross the largest part of Belgium. The weather got progressively better. The cold front was now really behind me and every now and then the sun broke through, giving me the privilige of sun while everyone else on the the ground was still in shitty weather … 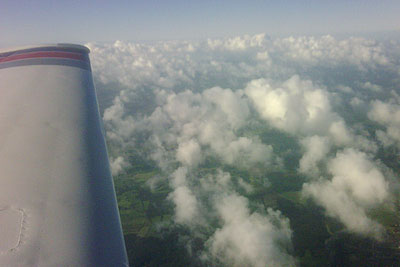 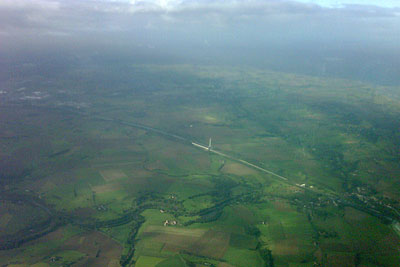 I could see Roncquières from the sky and soon I was let go into uncontrolled airspace by Brussels Departure. I contacted Kortrijk Radio for a straight-in approach on the NDB-DME Localiser approach to runway 24. Nice: an IFR flight almost always gets right of way in Kortrijk 🙂 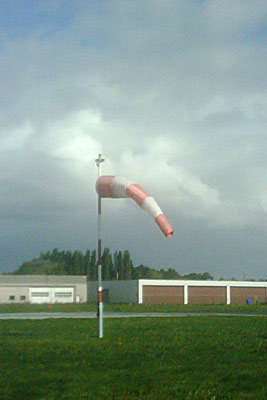 So I arrived a day later then planned in Kortrijk. But it was again an uneventful flight, albeit with lots of IMC … and I arrived in one piece, and that is exactly the purpose ! 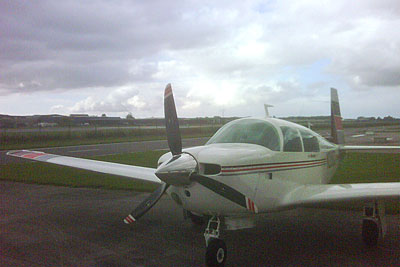 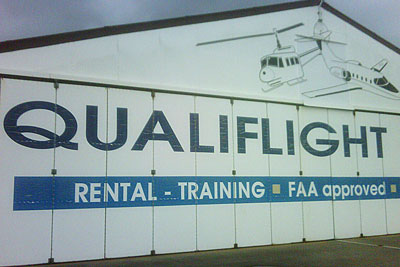 => Apologies for the crappy quality of the pictures. I used my smartphone to take them …