I had to be in a training class in Le Mans, in the center of France. Instead of driving or taking the high speed train, it was decided to make this a flying trip, albeit on my own time, risk and money. I also made use of the opportunity to prolong the tip to to Rodez for some personal stuff to be done in the south of France. Soon it became apparant that this would be a week long trip.

Propeller was so kind to make their Robin 3000 OO-FWA available for that week, an aircraft I had flown to the champagne region before earlier this year. The aircraft is IFR equipped, and I added my portable oxygen installation to the load so higher flight levels could be attained. The airplane is certified to 15’000ft. Next to that I did carry quite some luggage, including a large portrait and a wooden fence … yes that also fits in a small sportsplane. 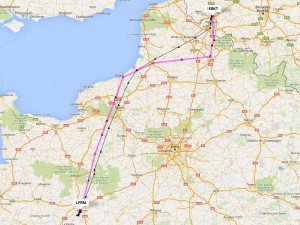 The first leg was from Kortrijk, Belgium (EBKT) to Le Mans (LFRM).The aircraft got prepped and loaded properly. At home I had weighed all items and labeled their weight onto them, yet it was well within the mass & balance limits, even at full fuel. I also took a liter of spare oil. It was a bit hard to fire up the engine though, but later in the trip this difficulty didn’t occur anymore.

The flightplan called for the typical large detour around Paris, this time via the west (see planned route on chart above in magenta):

I was IFR cleared 4000ft toward Cambrai VOR (CMB), and I took off from runway 24 in Kortrijk, switching soon to Lille Approach. With the oxygen aboard I could climb to 14’000 ft and pick up the stronger tailwinds. The weather was absolutely perfect: everything CAVOK for as far I could see. 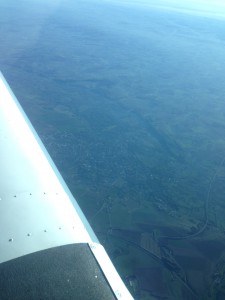 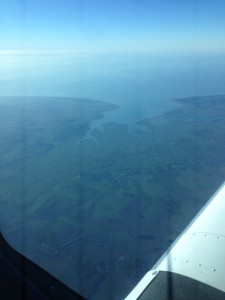 Despite having read the manual, it was hard to get used to operate the Garmin GTN-650 on-board: it’s installed a little far from the pilot position to operate easily. Also, having to constantly switch between the different modes  created more workload than expected.

With all that CAVOK around me, and the transparant canopy, I was bathing and sweating in sunlight ! 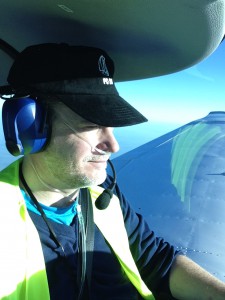 After Lille Approach, Paris Control took over and soon I was passing the rivers of the Somme and later the Seine near Rouen. ATC cleared me direct l’Aigle VOR (LGL). After Paris Control, Nantes approach took over and I requested the localiser approach to runway 02. They gave me a direct MATOT, which surprised me as this is a waypoint on the RNAV approach to the same runway. I had expected direct LM. After clarifying, they cleared me direct LM. ATC also passed me their telephone number so I could close the flightplan on the ground in absence of anyone in Le Mans Tower.

On the LOC 02 approach I passed overhead the airport. I made my procedure turn in the holding and soon touched down in Le Mans. I closed the flighplan and refueled before anything else, and then carefully locked and sealed the aircraft for its 4 days stay. 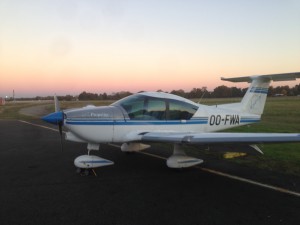 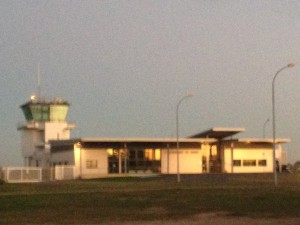 The rest of the airfield was deserted, so I called a taxi and was soon driving to the hotel.

Later in the week, I called the airport to announce that my airplane was parked there, and they catered for the bill via email: good service !

During the workweek in Le Mans, I checked the weather and it became clear that it would be difficult to get out of Le Mans on Friday morning due to a forecast layer of mist. Even when it is perfectly possible to cut through such layer at take-off, it leaves no plan B in case of engine troubles after take-off. On top, there were works on my destination airport of Rodez, adding some On Thursday morning, I took the decision to fly that evening in better weather. Everything was planned in Autorouter, filed the flightplan and made sure I could get out in VMC in daylight that evening. The hotel printed the briefing pack.

The taxi drove me back to the airport. At the airport, I negotiated myself out having to pay the invoiced airport-lighting fee as I was taking off in daylight: again good service at Le Mans airport !

I found OO-FWA in good order, geared up and prepared the cockpit. I contacted Nantes BRIA over the phone to open my flightplan, which they did. However, I had not noticed that Le Mans Tower was still operative, so they could have opened it for me. Anyway, no harm done.

The engine was started and I took off from runway 20 southbound. 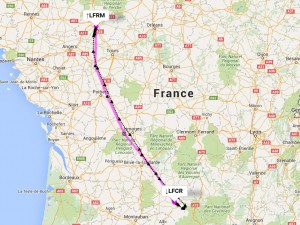 At about 4000ft, I entered cloud on my way to FL060, and later on FL080. I would be in clouds until about Limoges. In the meanwhile, the sun was settings and it became dark. I have a red headlight, and two spare hand lights. The wings were checked for ice with the hand lights, but the temperature never dropped below 3°C, so no ice was detected. 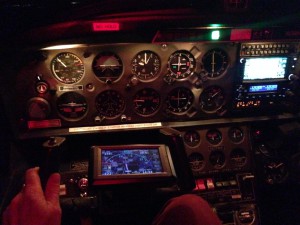 As forecast, the clouds thinned and at Limoges I was in the clear on a beautiful moonless night, nobody else on the radio, towards the south: it was magic ! 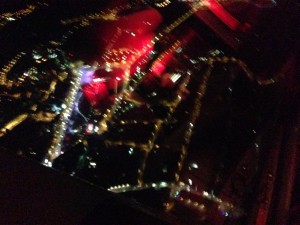 When switching to Rodez Approach, a Ryanair 737 was conducting its approach into the same airport. I asked to vectors to the RNAV 31 approach, but that confused the controller as it seemed that RNAV (GPS) approaches are typically NOT used in conjunction with vectors. Anyway, he cleared me direct CR204, the initial approach fix. I descended while the 737 was making its landing. Then I conducted the approach with its base and final legs. 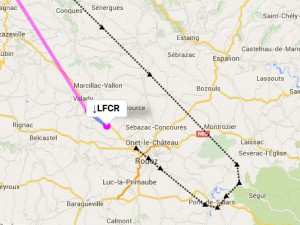 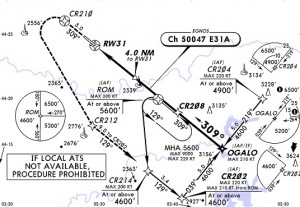 On final, the approach crosses the city center of Rodez, which lights were blinking under the wings. 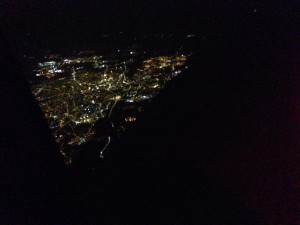 I landed and parked the aircraft: just in time for the car rental office not to close. And I drove away to my destination into the night in the Aveyron with all my convoluted luggage: 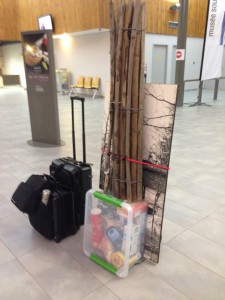 The weather for the return flight on Sunday was supposed to be very good, and that promise was kept ! The flightplan was the classic eastern route from Paris: 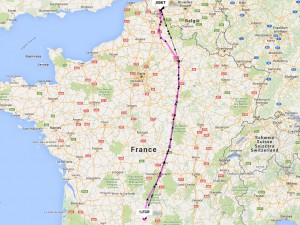 At the airport, I paid my parking and landing fees via a classic form into an evelope, with a cheque added: worked quite well and it needed no intervention from an operator.

When trying to refuel, I ran into trouble. Apparantly that morning a NOTAM was issued hastily telling that no 100LL fuel was available. I learned that from the controller when starting up. There was an error with the fuel pump. When he asked me the classic “please state intentions“, I said I would do a local VFR flight to Villefranche (LFCV). Then he offered to first try the pump in Rodez and call me back. So I taxied to the pump. It turned out that the TOTAL pump was working well, but that the counter indicated like 7 times more euros than pumped. While I had full tanks now, the indicated price scared me, so I took ample photos as proof, told it to the Tower controller and gave a call to TOTAL in the next days to state the issue. So far, I have not heard anything back. 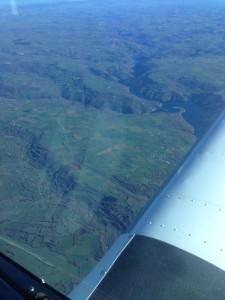 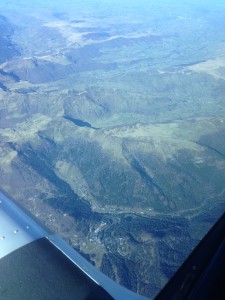 Take-off was from runway 13 and soon I climbed back to FL140, passing the rugged northern Aveyron. 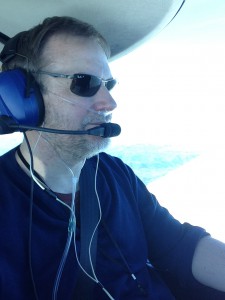 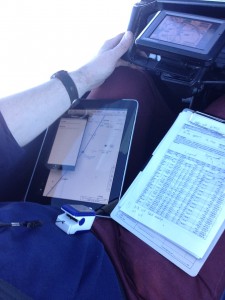 Under my headset and in between the oxygen piping and sunglasses, I squeezed my earphones so I could listen to music from the iPhone while cruising over France. After Clermont, I spoke with Paris Control and Seine Control.

Over Reims I was told to carefully watch my altitude as they held an Aeroflot airliner at FL150 so he could overfly me. I saw him coming at high speed from right to left: from east to west.

Later I was switched to the familiar Lille Approach. From far I could receive the ATIS of Lille, hearing about an overcast.

After a week on the road with an airplane as main travel tool, I was finally back home. Nice experience !