It was a while that I had had flown. I wasn’t even current to carry passengers anymore: I missed one take-off and landing over the past 90 days. So, time to brush off the skills ! I had done some Flight Simulator IFR training at home in the past couple of weeks, so I assumed that doing a brushing-off under IFR wasn’t a bad idea.

The weather was typical benign autumn weather in this part of Europe: high pressure area, winds from the east, misty in the morning, while the sun was trying hard to burn off the clouds. This is ideal IFR practise weather, although I do admit that it was on the edge of my personal limits because the cloudbase that morning was sitting low. GRAMET was showing no clouds.

My plan was to fly from Kortrijk, Belgium (EBKT) to Albert, France (LFAQ), a 60 NM short hop and ideal to practise some approaches. The chosen airplane was again the Piper Warrior III OO-JAB from Propeller. I couldn’t take passengers as I wasn’t current anymore. Next to brushing-off, this flight was also a test for:

This was the METAR for Lille that morning:

Cloudbase was at the ILS minima (200ft), so I waited for that base to lift. I postponed my flightplans through Autorouter’s webpage on my smartphone.

The airport of Kortrijk was pretty deserted with this weather, except for three guys who were waiting for the weather to turn VMC, and who were wondering how it was possible that I could go flying 😉 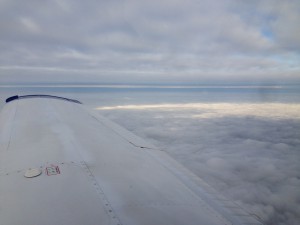 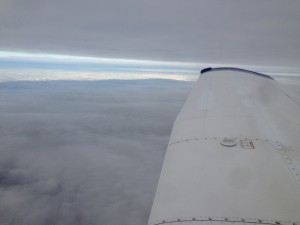 Take-off was from runway 06, left turn, crossing OKT inbound LL. I was very quickly in clouds, and equally fast out of clouds. The layer was very thin, so I assume that GRAMET’s model did not foresee that morning mist.

While climbing to 4000ft Lille Approach immediately gave me a direct to ABY, the beacon near my destination Albert (LFAQ). I asked and obtained the weather for Albert over the radio, and I opted to do first the RNAV Rwy 09 approach, so they changed my routing to “Direct ADNOR“. I told them that I wanted to do the ILS to Rwy 27 with circle-to-land rwy 09 immediately after the RNAV approach, which they granted.

The cloudbase in Albert was higher, and the RNAV Rwy 09 approach went fine. I entered cloud at about 1500ft and broke out at 900ft ASL. 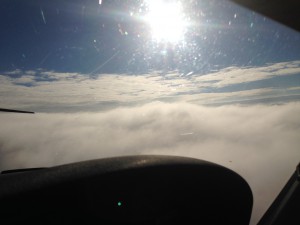 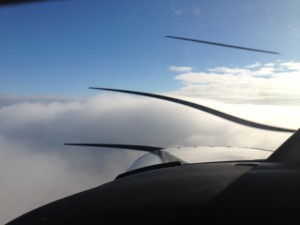 I did a touch-n-go, and -as briefed beforehand by Lille Approach, continued to the beacon ABY. I entered the hold for repositioning, followed by the procedure turn (another hold with 2 min legs), and declared to be established on the localiser for runway 27. All the while, I was flying in and out of clouds above the Somme river. 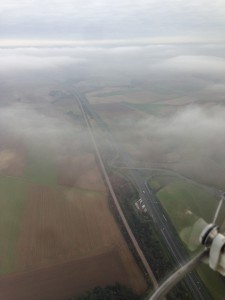 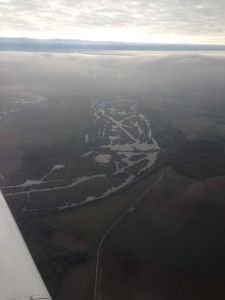 Lille Approach told me to close my flight plan over the phone and passed me the phone number in flight. They switched me back to Albert Auto-info, so I had to report my position in French. In the 10 minutes that I did my ILS repositioning, the airport got pretty busy with some locals squeezing in some quick touch-n-goes.

3 miles from the threshold, I broke off my ILS and joined the right-hand downwind to circle-and-land on runway 09 as the winds were favoring that runway.

After the landing, I closed my flight over the phone, had a small bite and started up again. This time, Albert Auto-Info was manned with a nice lady who was also able to open my flightplan – all in English. 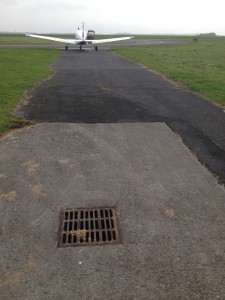 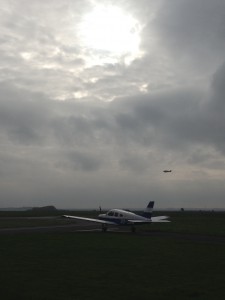 Take-off was again from runway 09, and I climbed to FL050, only to find myself in a second layer of clouds, rather unstable this time. There was also quite a lot of headwind.

The winds still favoured runway 06 in Kortrijk, but its only approach is the NDB LOC DME approach to runway 24. Cloudbase at the nearby Lille airport was reported to be 500ft, and the straight-in minima of that approach are 510ft. The circle-to-land minimum sit at 660ft, so this was on the edge. If I could believe the 500ft cloudbase, it was over the edge!. So my backup-plan was to do the ILS in Lille and wait until the cloudbase lifted. 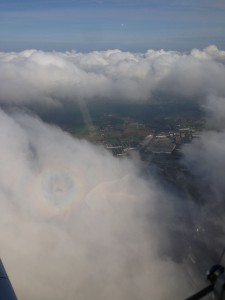 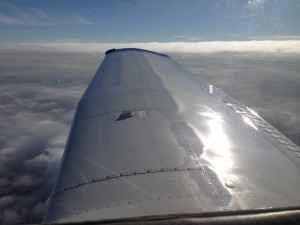 Kortrijk, however, reported 1000ft cloudbase. So I changed my plans:

So I requested and obtained the straight-in to runway 24. I broke out at around 1000ft, so Kortrijk Radio was correct with their cloudbase report, and I changed to Plan B. I did the circle-to-land at about 700ft, north of the runway. This is 300ft lower then normal, and under the clouddeck, it felt totally than the classic VFR circuit. 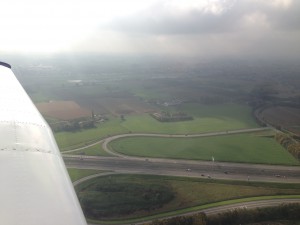 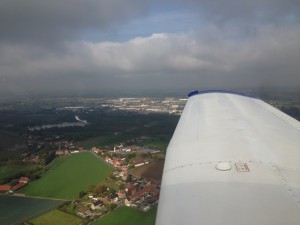 The landing went fine, and the airport was still pretty deserted … but I got my flight in ! 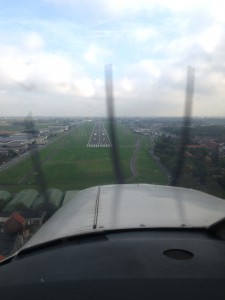 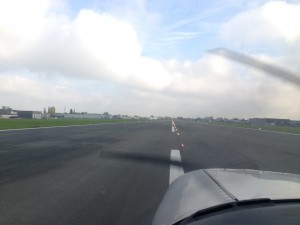 So what was the outcome of this flight ?

Time to switch from semi-paperless to full paperless !