It set out to be a beautiful early summer day, although clouds were still rather low and covering about half of the sky. This was a long-promised flight to my friend Koen. Plan for today was a flight south towards the airport of Le Havre Octeville (LFOH), then along the Seine river inland towards Rouen. After Rouen northeast, skirting the class A airspace around Paris towards Albert, and then due north back to Kortrijk. Airplane of the day was our trusted Cessna 172 OO-WVS. 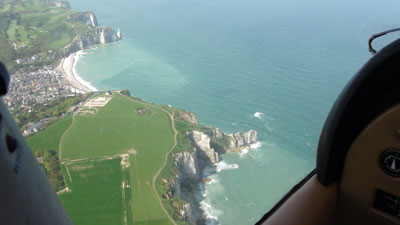 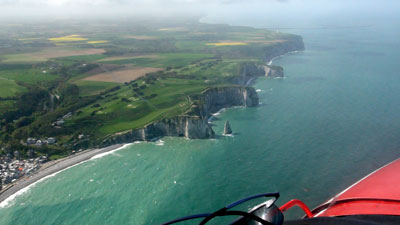 Soon the clouddeck raised. We set course towards Abbeville VOR. At that moment, the coast of Normandy became visible under our right wing. We continued to Dieppe VOR, crossing the beautiful harbour of Dieppe. I had passed there last year on my summer Picardie trip. The Normandy water has this deep blue/green hue. We cruised a bit inland again, and in our planned approach to Le Havre, I had selected the entrypoint of Etretat. Now, I must say that I am pretty good in geography, but I had no knowledge of the rough beauty of the Etretat coast. It turned out to be a very famous beach with arches in the water, all set into that deep blue/green water.It was beautiful to overfly this, and an unplanned surprise. 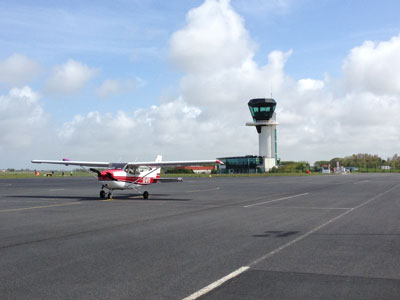 We landed uneventfully in Le Havre. Taxiing took some time as we had to hold for inbound parachute traffic between us and our intended parking spot. We had lunch in Le Havre airport, and continued our journey soon after.

First we followed the Seine river, crossing the Normandy bridge and the bridge of Tancarville: all very impressive. We continued skirting the Seine towards Rouen and then northeast to Albert. Then north towards Kortrijk. Nice trip, with Etretat as a beautiful surprise !