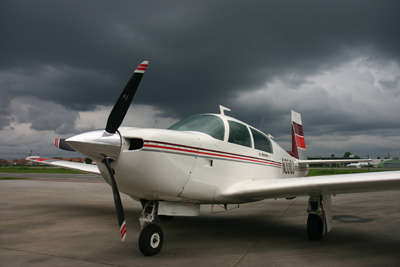 It’s been a while that I flew the Mooney M20J N201DJ. I never had it flown solo although the owner had me cleared for it. The aircraft was just coming out his maintenance in Kortrijk, so it was the ideal moment to do a short solo flight to get the aircraft under the belt again.

The plan was to fly VFR from Kortrijk (EBKT) to Merville (LFQT) and back, a short hop over the Belgium-French border. I would practise sharp turns, slow flight, practise engine failure and no flaps landings. The more edgy training routines like stalls, manual gear extension or EFATO (engine failure after take-off) were reserved for when I had an instructor on board again. The return flight was supposed to be an IFR flight back to Kortrijk, but I didn’t submit a flight plan yet for that leg.

This year’s spring has brought us some challenging weather, and this time again, the forecast was on the edge. An occluded front was passing over the country from western France, basically bringing unreliable weather along. At the time of my flight, mild and local thunderstorms were forecast. I saw them coming on Belgocontrol’s rainfall radar.

Looking around the field, there was plenty of blue sky. Visibility perfect. There was a local rainshower in the direction of Merville which didn’t look large on the radar but nothing blocking. So I took off for my solo training flight. At altitude, I could see the rainshower in front of me, spewing precipition towards Mother Earth. Below the rainshower, everything was invisible due to the rain. I elected to follow a northern course to try to get around this thing. I avoided Moorsele (EBMO) and flew to Roeselare, still keeping this rainshower-thing to my left. It took me all the way to Ieper to get around it. Once past Ieper, I picked up the localiser for runway 22 at Merville, still about 18 miles out. I followed the localiser’s south-southwestern course. All the way I was talking to Lille Approach. I practised two sharp turns and a slow flight a 2’500 ft while still just over Belgium’s territory. I did a landing with a touch and go in Merville, and while maneuvering on final for the second time, the controller told me that there was a squal line in the neighbourhood, producing hail (GR !) ! I told her that I would make this one a full stop so I could submit my return flight plan.

The field was totally deserted, but for the lonely controller up in the tower. Her shift was almost over, and I was the annoying crazy foreigner that still needed to submitted this stupid short flight plan … Anyway, that’s what I did. Both of us were happy when done.

I returned on a VFR flight plan so I could see where I flew so I didn’t end up in the nastiness. I performed a Practise-Forced-Landing somewhere over Zwevegem and then returned to Kortrijk from a very good learning experience. Once at the ground, it turned out that the rainshower I carefully avoided was in fact the one producing hail (GR !) !