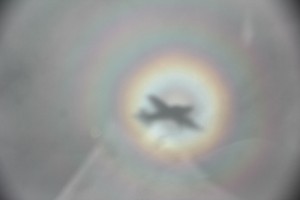 A glory is an optical phenomenon that resembles an iconic saint’s halo about the shadow of the observer’s head. It consists of one or more concentric, successively dimmer rings, each of which is red on the outside and bluish towards the centre. The effect is believed to happen due to classical wave tunneling, when light nearby the droplet tunnels through air inside the droplet and, in the case of a glory, is emitted backwards due to resonance effects (from Wikipedia).

This Glory happened on descent into Auxerre (LFLA) from Rodez (LFCR). Not only it was a nice optical phenomenon, but it was also signifying a glorious moment because I had succeeded in safely returning from my destination. It took a day longer than foreseen, nevertheless… so far for an IFR rating … but I did learn some new way of flying.

I had to be in South France on the exact day due to two appointments. I was first planning to fly with the OO-FWA, but as it was under repair, it became increasingly clear that this aircraft would not be available at the moment I needed it. I also looked at doing this flight VFR, like I had done in the winter of 2011, and in September 2012. This time, however, I settled on doing the trip IFR: for pride and for weather certainty. That last element didn’t work out completely, we shall see.

I booked the Piper Warrior III OO-JAB, with some friendly help from another pilot at Propeller. With the JAB, IFR was entirely possible. 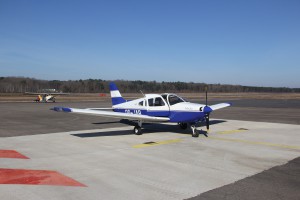 The IFR flight was planned with the help of Rocketroute and Autorouter, and weather and NOTAMs were checked on Meteo France,  Belgocontrol and Eu Aviation Weather sites.

I filed EBKT FERDI Y50 REM B3 VATRI G40 TRO B373 LUREN T11 DIVDA DCT OKRIX LFLA at FL120. I had to cut the flight in two because of IFR fuel calculations, which are more conservative than VFR. The added bonus of a fuel stop is bladder convenience !

The day of my going flight was beautiful: completely CAVOK. IFR wasn’t really necessary although it contributed strongly to the ease of flight: I did not have to care about the famous French military airspaces or about the dreaded Class A airspace surrounding Paris: I was allowed into it due to my IFR flight plan.

You can follow along on the above flight track (click it for higher resolution). At the exact planned time of 9h00 local, I was cleared in Kortrijk to 4000ft, initially inbound MAK from runway 06. When switching to Brussels Departure on 126.62, I was cleared to FL60 direct Chievres VOR. When switching to Brussels Control on 131.1, they cleared me further to FL120 and direct MATIX. This series of directs cut off the redundant detour via FERDI that Eurocontrol’s computer imposes. 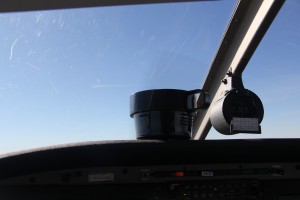 My oxygen system set started puffing O2 in my nose from 5000 ft onwards. The Piper climbed nicely to FL100, but from there onwards it seemed to have lost all climbing appetite and took a long time to reach FL120. So long that Lille Approach queried my climbing behaviour.

Once having reached that cruising altitude of FL120, OO-JAB sped up to the calculated TAS of 110 knots. I leaned the engine further and noted a fuel flow around 8.5 GPH, while I had flightplanned at 9.1 GPH. In fact, I could have made it without a fuel stop, but my bladder wasn’t prepared, neither my flight plan. 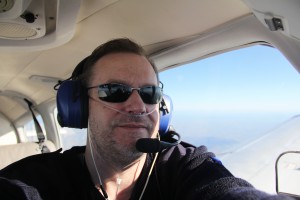 By squeezing earplugs connected to my smartphone in my headset’s ear cushions, I could safely listen to some music without loosing contact with ATC: so comfortable and enjoyable!

At waypoint VATRI, near the Chalons Vatry airport (LFOK), I received a direct to INSEB, the initial approach waypoint of the requested RNAV GNSS approach towards runway 19 in Auxerre. In France, upon request, ATC gives you the weather, so I knew that runway 19 was probably in use. They told me, nevertheless, that there was no AFIS on the airfield, so I had to switch to French auto-info, and close my flight plan per phone. ATC passed me the telephone number over the air. 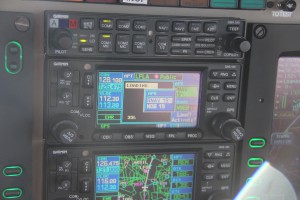 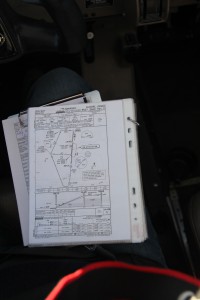 The descent was started and I followed the RNAV approach diligently down to its non-precision minimums of 960 ft MSL. 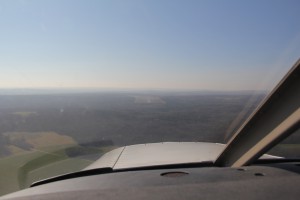 There was activity on the airfield, but no AFIS. After having parked at the fuel pump, I closed the flight plan per phone. I refueleld with help of the Air Carte Total, and as there was no AFIS, I didn’t find any place to pay my landing fees… which I did not. So I phoned ATC again to obtain the clearance for my next flight to Rodez. They gave me a generous 20 minutes plan-void-time. 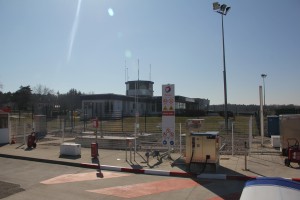 I had filed my next leg to Rodez as follows: LFLA OKRIX DCT DIVDA T11 LUREN B373 MOU A27 MEN LFCR at FL 120. However, I never climbed as high as 12’000 ft anymore. ATC stopped me at FL110. As you note on below image (click it for more detail), despite the flight plan, they gave me a pretty direct routing. 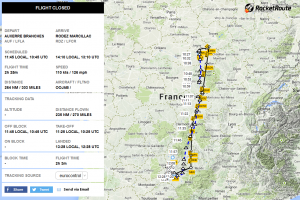 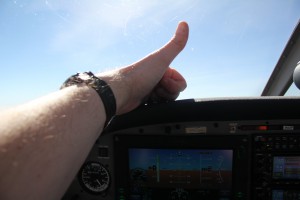 This was the most beautiful part of the trip. In the perfect CAVOK weather, I saw the hills of the Morvan and Ardèche, and the mountains of the Alpes on my left east. The Puy de Dôme on my right west while Clermont-Ferrand was slightly covered in clouds … which were the only I saw on my trip. 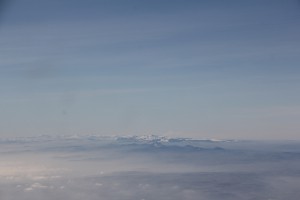 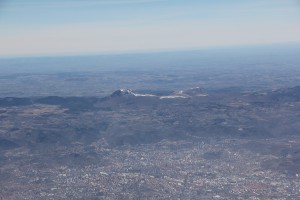 The ski areas of Super Besse, Lioran and Aubrac, still featuring snow, passed under my wings. Soon ATC cleared me for descent. 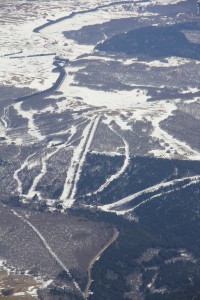 I requested and obtained the RNAV GNSS approach into runway 31 at Rodez. However, this approach still felt uneasy to the Rodez controller. Coming in from the south, I passed over the city centre of Rodez, featuring its imposing cathedral. 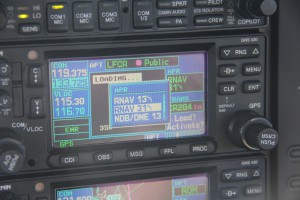 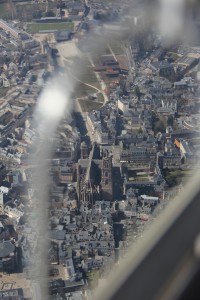 Rodez Tower cleared me to land on runway 31. I refueled immediately on the north side of the apron, and taxied back to the renewed south side where I parked amongst some more big airplanes … but hey I made it there on the exatc day I needed it. IFR works (so far …) ! 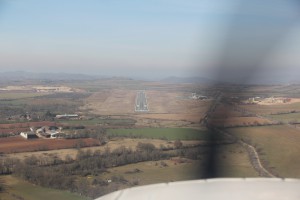 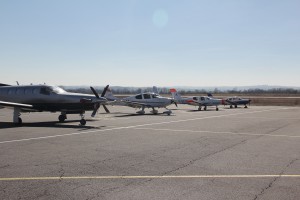 I had for two days work in my destination near Rodez, so I focussed on that. However, as the days progressed, it became more and more clear that weather was not planning to co-operate on the day that I wanted to fly back to Kortrijk.

Here was my predicament: an occluded front was sitting idle with its northern end above Rodez. Beyond Rodez, towards the north, everything was clear. The temperature was at a low 5°C. Rodez sits at ~2000 ft MSL, so freezing was expected to start at ~4000 ft MSL. However, the IFR safety altitude (and radar minimum altitude) sits at 4600 ft. Icing in the low clouds was predicted by Rocketroute, Jeppesen and GRAMET. So if I wanted to fly IFR, while avoiding icing in clouds, clouds could only start around 5000ft. If they were lower, I could depart VFR under the clouddeck to the North were better weather was waiting for me. 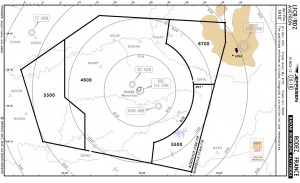 But on the planned day of departure, the temperature never came above 5°C, and the cloud never lifted beyond 1000 ft AGL. So I had to postpone my departure: I had bumped into the limits of IFR flying without de-icing… I stayed a day longer in Rodez.

The next day, the stationary occlusion front was about to dissipate, and temperatures were slightly higher at 7°C. However, over the high ground to the northeast of Rodez, it was expected that icing would occur without having the safety of descending below the clouds into warmer air. So I flightplanned a total detour to the west away avoiding high ground, with the option of remaining VFR under the clouds to avoid icing until all nastiness of the occlusion was left behind me.

This was the flightplanned route with the westbound detour till the fuel stop in Auxerre: LFCR RZ DCT ARMAX DCT SOLNO DCT ABUSO DCT RISUN G21 MOU B373 AVLON A2 OKRIX LFLA

The clouddeck was around the 3700 ft, which gave me a little headroom.  I took off VFR with two options:

A raincloud was closing in from the south, so I was a bit in a hurry if I wanted my two options to work for me. I started the westbound turn, scanning for holes in the sky. I found one. I requested and obtained my IFR clearance and was cleared on a nice direct to Moulins VOR. Option 2 had worked ! 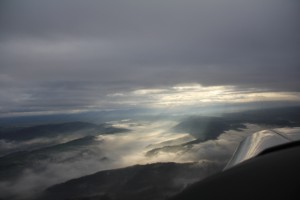 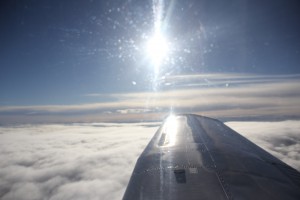 I climbed through the hole. On the way up, I did encounter IMC (clouds) despite the hole. I watched like a hawk to my wings, but there was no ice forming at all. Getting above all clouds, I climbed to my cleared altitude of FL110 with oxygen in the nose. On the log below you see the enormous difference between my planned route (westbound), and the direct route I took. This type of IFR planning and  flying was new to me and it was a good learning point: how to safely defeat weather, terrain and airplane limitations ! Glorious 🙂 … 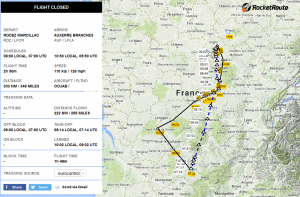 The rest of the route was uneventful. After Moulins VOR they cleared me to descent towards Auxerre again. I descended towards the clouds and noticed my shadow growing larger onto the clouddeck below me. Around the airplane’s shadow, a rainbow had formed: a Glory ! 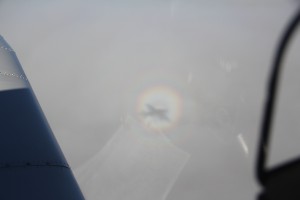 I landed and refuelled in Auxerre. There was a friendly AFIS in the tower, and they charged me a moderate 12 euros landing fee. 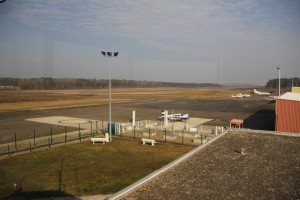 After take-off, the ATC controller from Seine Control was very nervous. He had a lot of traffic to work with, and constantly asked for my heading, and vectored me away from my track. At Troyes VOR, I could resume own navigation. 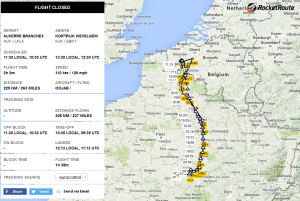 Over Reims, I saw a thick cloud layer. The layer was the remainder of another front that lingered over North France, all the way up to my destination Kortrijk (west Belgium). It appeared that the clouddeck was in freezing temperatures (it was -12°C at my cruising altitude FL100). So I requested Paris Control a descent to FL060 before I would have to enter that clouddeck in order to avoid any icing risk. The controller warned me three times that I would enter non-controlled airspace at FL60, but I didn’t care: I would be below and clear of clouds !

Further on, it turned out that I had forgotten to switch my altimeter to pressure altitude 1013, which she pointed out to me. Oops! Another lesson learned.

The rest of the flight was uneventful. Weather remained benign under that clouddeck, and the tailwind (yes!) carried me back home faster than I am used to. Around noon, I joined the traffic circuit for runway 06 in Kortrijk behind a red R44 helicopter. The heli had the fantastic idea to do practise a engine failure procedure, making me do a go-around. Just after noon I set down my wheels onto Belgian tarmac again.

What a glorious set of flights !