One day I flew with my brother to Zwartberg in the east of Belgium from my home base in Kortrijk, which is in the west. When you go from west to east in Belgium, the Brussels TMA cannot be avoided. So instead of trying to dodge or fly around the TMA, I planned going through it while passing above the Brussels International airport in VFR conditions.

Landing in Brussels is out of the question due to the hefty landing and handling fees they charge us, small airplanes. Basically they want to discourage everyone to be just landing there for fun. What could I do to mimic a professional landing in Brussels without having to pay these hefty fees ??? What if I planned for a simple go-around without touching my wheels … would that work? I made a note in my flight plan to “practice a go-around in EBBR”. The AIP pages for Brussels do allow VFR passage during lee hours, and as we were flying on a lazy Sunday afternoon, we were in the middle of their sleepy period. 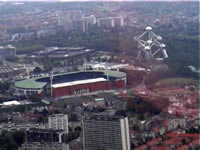 We took off with OO-WVS, my beloved C172 of the RZAC, and as soon as we entered Brussels TMA on the Brussels Departure frequency, they checked if I still wanted to do that go-around. I confirmed, and they told me they’d work on it. I did the normal Ternat – Groot-Bijgaarden – Atomium VFR route into Brussels and then Brussels Tower put me into a holding above the Peutie pylon. Runway 25R first accepted a landing from a BA Speed bird, who called us ‘in sight’ (my ego was soaring already at FL100 !), and secondly a SNBA jet. Then we could make our right-hand VFR circuit for 25R. As you know, a Cessna 172 is slow as compared to jets, so I kind off froze the runway operation for 5 minutes with my lazy go-around. Yes: I took the whole length of 25R for my go-around, which cost me exactly zero euro landing fees ! A Biman DC-10 waited impatiently for a couple of minutes at the B1 holding for that d*mned sports pilot to disappear. He probably consumed more fuel during his wait on the ground than I did my whole flight …

Check out this small movie on my going around in Brussels:

After the go-around we continued completely satisfied to Zwartberg and Antwerp, and we further had an uneventful great trip.

A couple of days later I received an email from a friend telling me that I was spotted in Brussels… Apparently, when I passed the tower, my ego waved in content to the tower in Brussels who were so kind to let me do this. At that same moment, a plane spotter took a great picture of me in my little plane waving at the tower. Good timing! Thanks to Wim Callaert for taking the picture ! 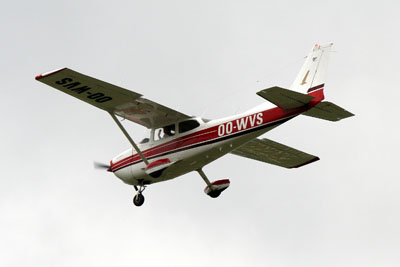