Today was the real first flying day of our adventure: flying Papa Charlie from Dakar to Lille.  Last night we decided that Fred would do this flight: VFR from Dakar (GOOY) to the brand-new airport of Nouakchott (GQNO), the capital of Mauretania. I would do co-pilot duties: the radio.

We flightprepped as follows: GOOY (Dakar) – N1 (reporting point above the Pink Lake) – SLO (beacon in Saint-Louis, in the north of Senegal) – ARBEN (first point in Mauretania) – OT (the VOR in Nouakchott – GQNO. The plan was to fly low and slow (55% performance) along the coast.

I hadn’t slept very well because we had eaten too much Lebanese food (Mezze !), plus Dakar is 2 hours behind on where I live, so I got up rather early and took a stroll along the beach at the hotel front. Plenty of people were exercising, swimming, sporting already. It was a fantastically colorful sight to behold! 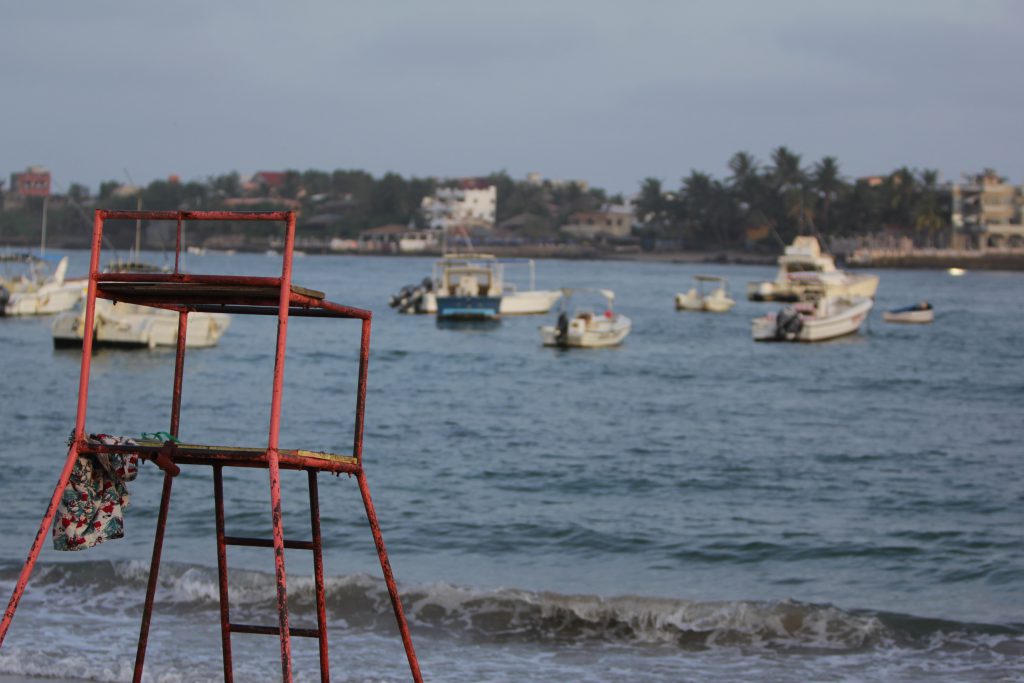 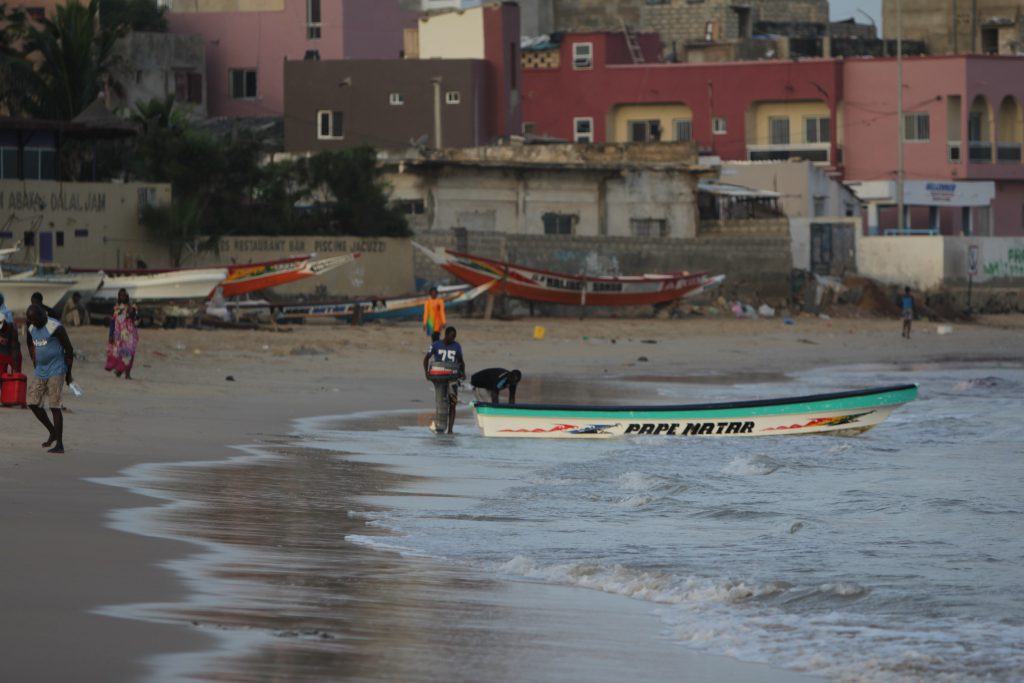 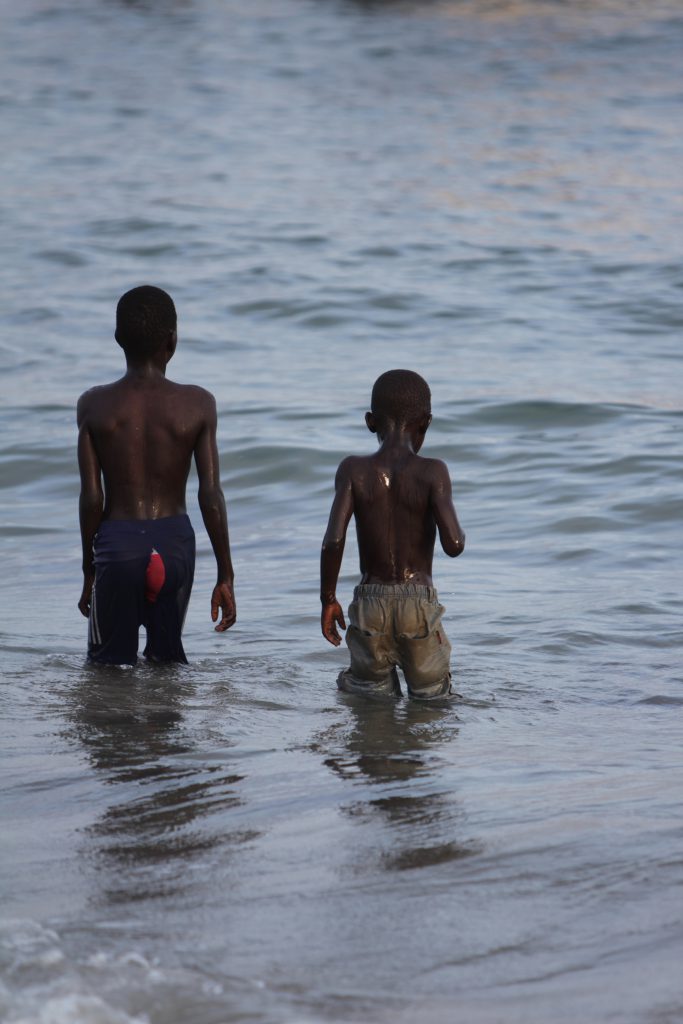 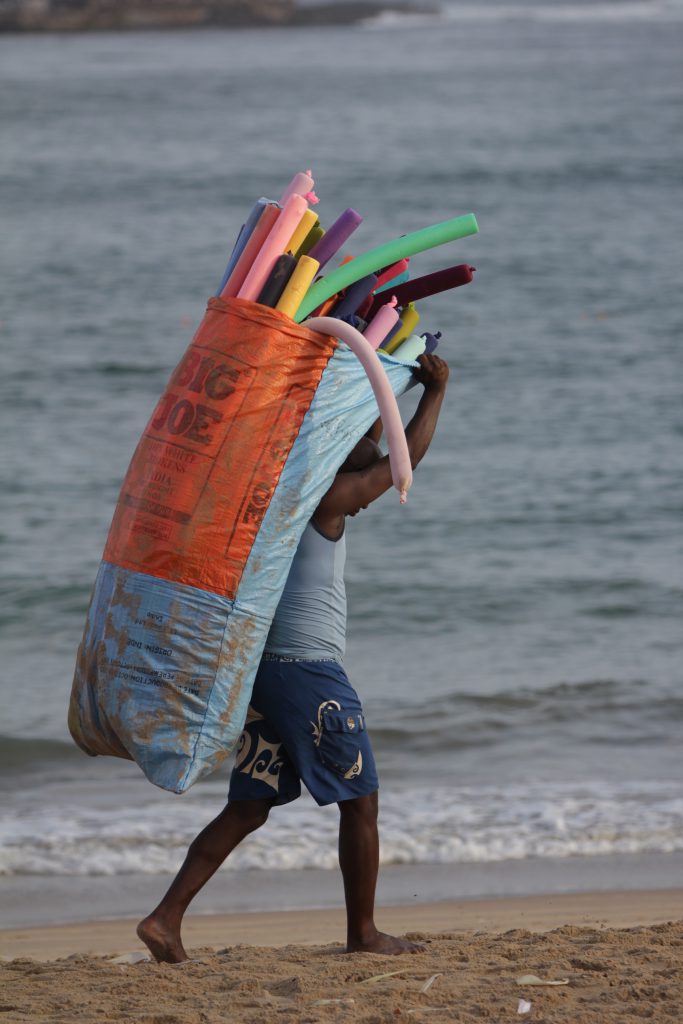 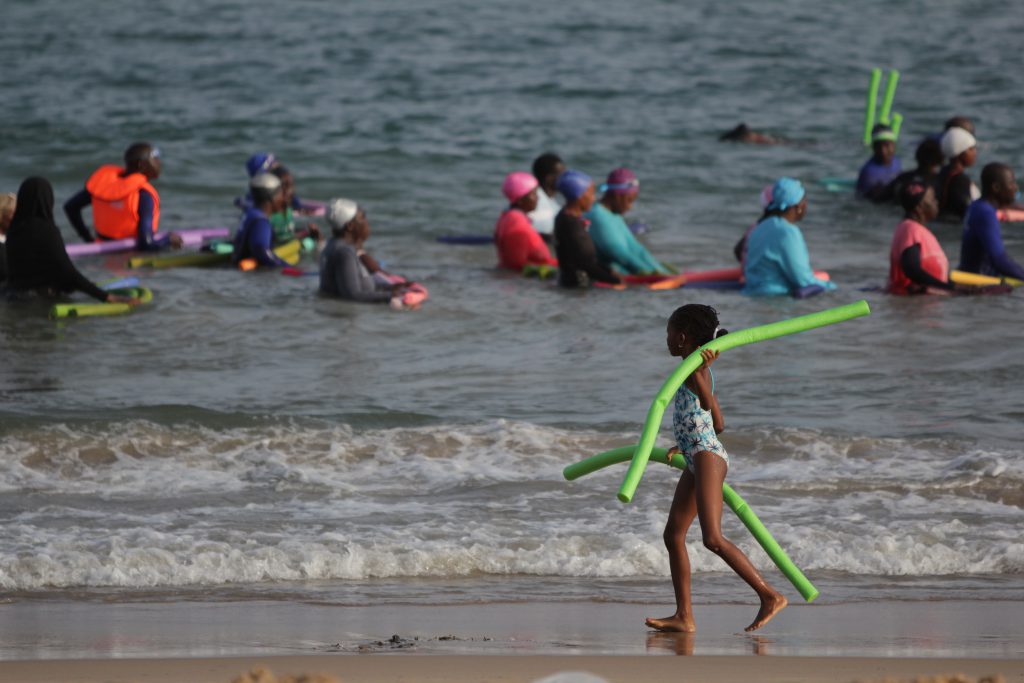 We had our breakfast, and took the hotel shuttle back to airport. At this point, I should disclose that I was wearing a white shirt with pilot bars (3 stripes). Reason is that our flight endeavor would look more official towards the official people we planned to deal with: customs officers, airport employees, police, immigration etc. Guess what: it did work ! I behaved like a real airline pilot, and people were behaving back in the way that I wanted it. 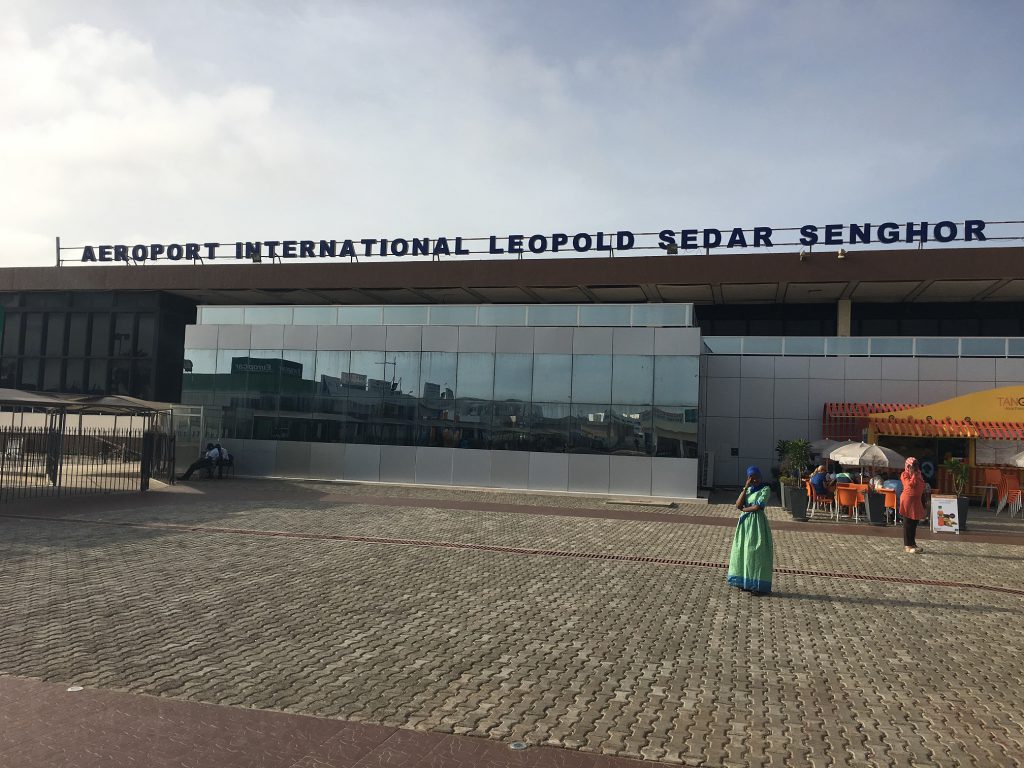 First stop was immigration, and we had to show our flight plan. Then we went to the “C” office, the worldwide signal that you have to report there as a pilot. We were handed a nice binder with the latest weather, and than we had some discussion on the cost of Papa Charlie’s stay in Dakar. It worked in our favor that we said that we were all three crew, so we didn’t have to pay for any passengers. In the end we paid 1,4 euro landing taxes in total ! 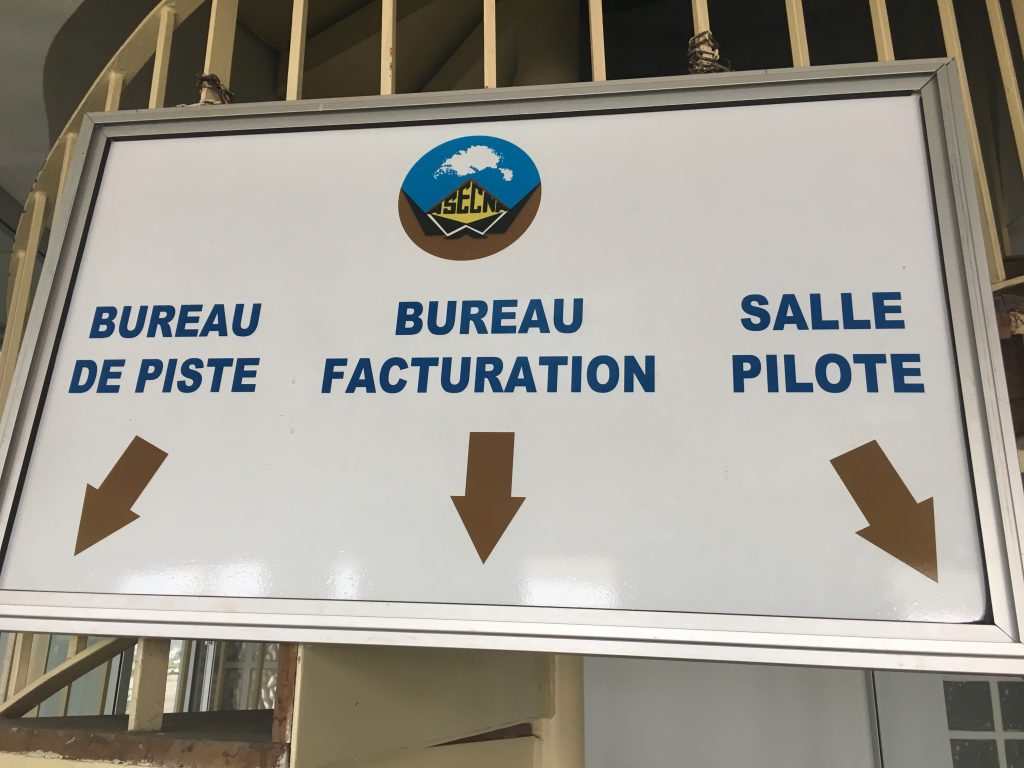 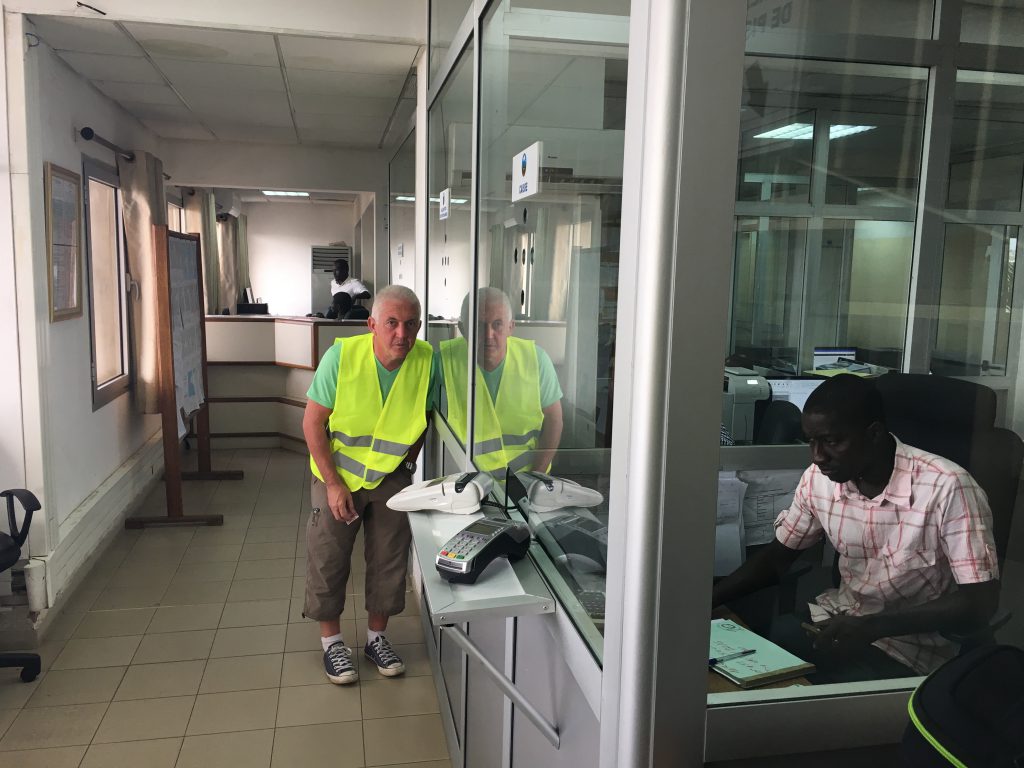 We even arranged a full bus to drive us, three amateur pilots, to where Papa Charlie, our 1978 Piper Turbo Arrow III airplane, was waiting for us. That bus ride came in the price of 1,4 euro. 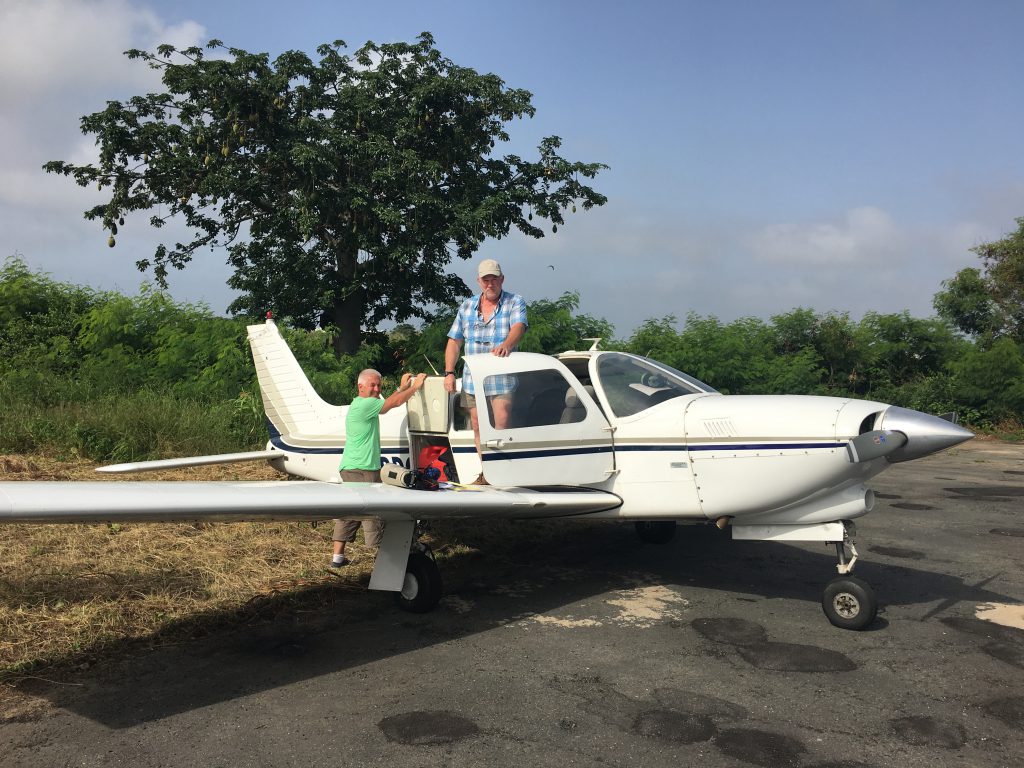 We carefully preflighted Papa Charlie, and at exactly 10h00, I called the tower for for our startup. We got assigned the shorted runway, and we took off, heavy with 3 adults, luggage and full fuel towards reporting point N1, along the coast with a view onto the city of Dakar. 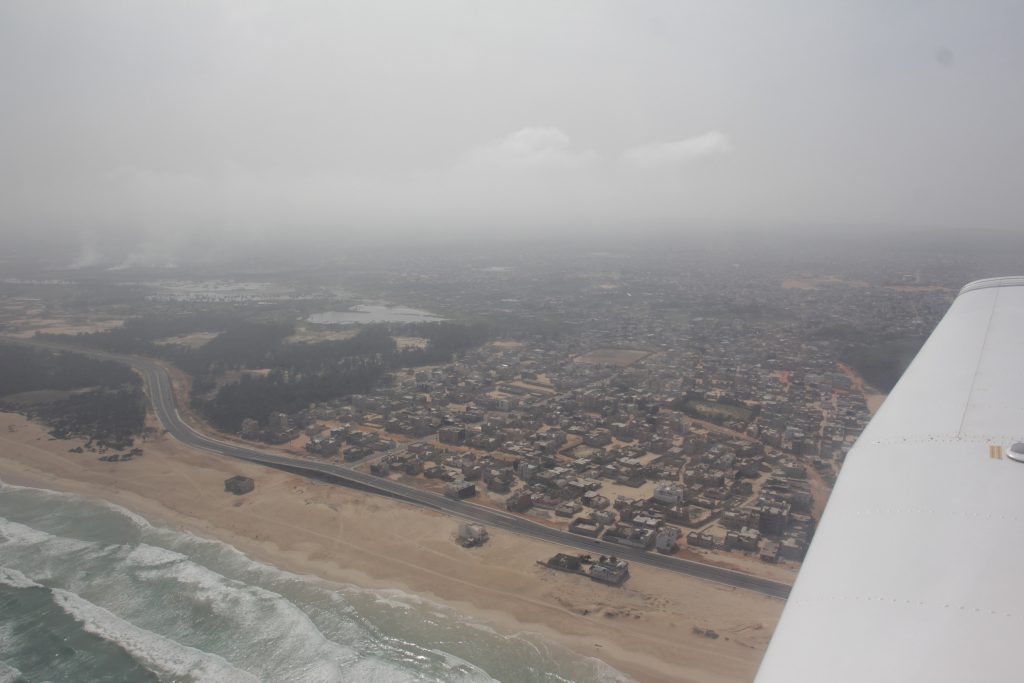 As soon as we were in the air, we were asked to pass along our estimates times for all points in our flightplan: SLO, ARBEN, Nouakchott. Then we were told that in case we lost contact with ATC, that we should contact Nouakchott at 118,4 Mhz at ARBEN.

First point on our plan was N1: on top of the Pink Lake. And yes, the lake is utterly pink ! The color comes from the algae it contains, who have evolved to be able to survive in the salty lake. 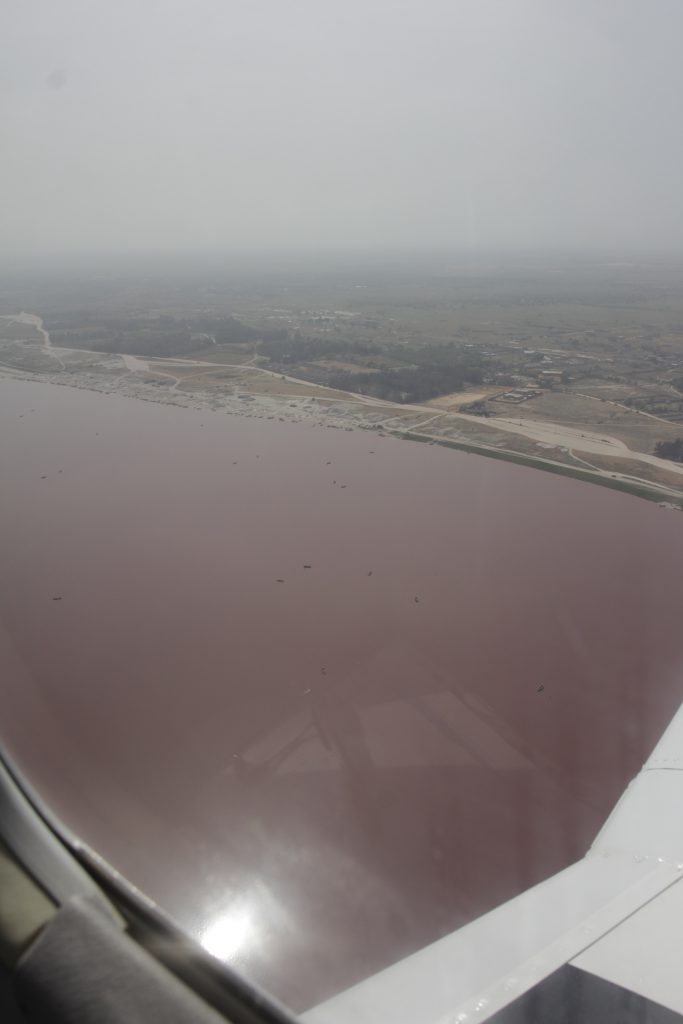 After a while we lost radio contact with Dakar, so we continued northbound along the coast. At a certain  moment, Dakar ATC called us with some level of excitement in his voice, but when we answered, they couldn’t hear me. So we continued. They kept calling me, and at a certain moment, he changed his procedure. We had to squawk IDENT on our transponder if we could hear them. So I hit the IDENT button and the controller came back with the following words that we will remember for a long time:

Transmitting in the blind: F-HRPC please be advised that Mauretania is not finding your autorisation to overly and land at Nouakchott. Do not proceed to Mauretania. Please advise how to proceed.

Well, they quickly had our attention ! In order to clarify stuff, I asked Fred, the pilot in command, to climb so I could establish two-way communication with Dakar ATC. At 5000ft, they could hear us and the controller repeated his previous statement. I asked to land in Saint-Louis, but he told us that the airport closes on Sundays (which we knew – but you never know). So Dakar advised us to return to Dakar. Then I took our permission, and started quoting the most important details of it, including the name of the director who had signed the autorisation. The autorisation we had in hand was correct and valid – it had to be them who had made a mistake !! We asked to double-check with Nouakchott.

Fred started to do 360° turns abeam Saint-Louis and we snapped the following picture of the steel bridge near the famous Aeropostale hotel “Hotel de la Poste”. 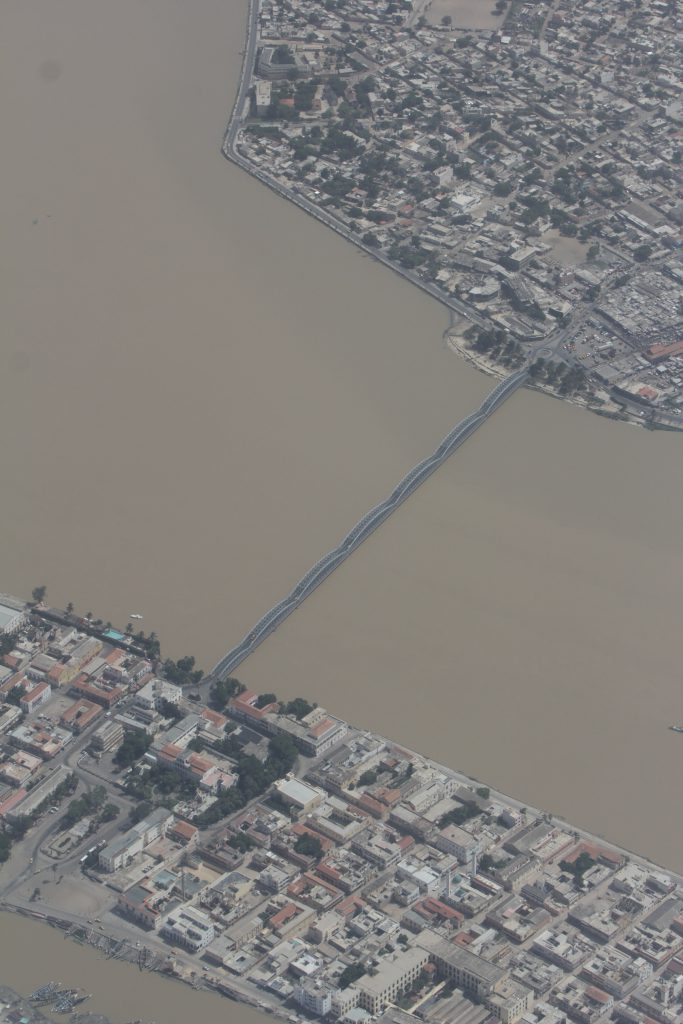 All of the sudden, Dakar came back on the radio and told us to proceed to ARBEN ! The autorisation must have come through ! We updated our estimates and crossed the Sénégal river into Mauretania ! 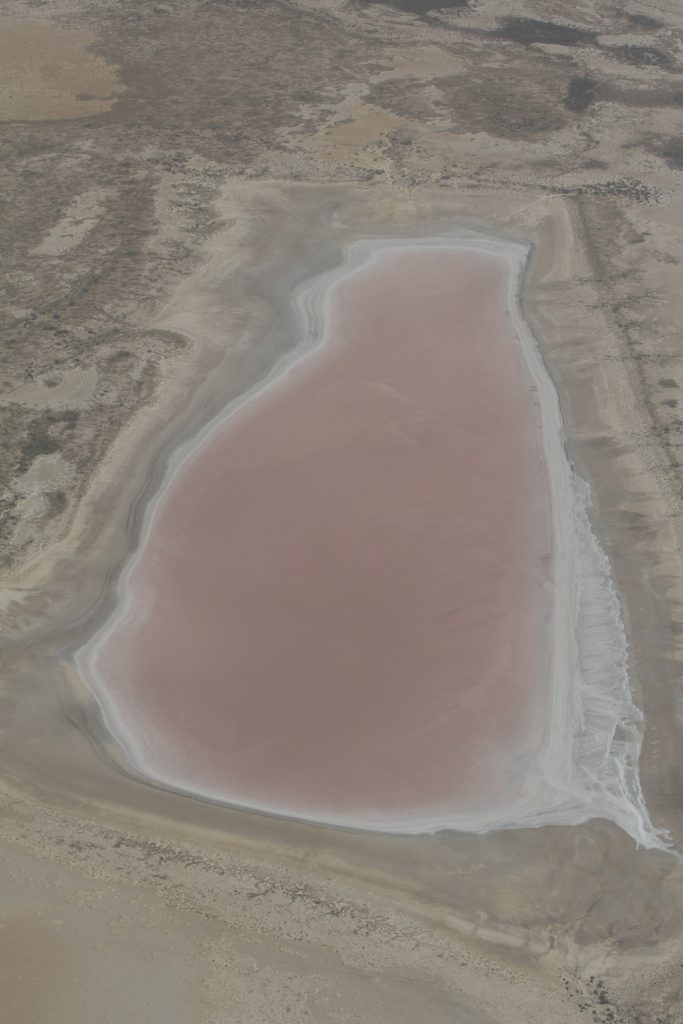 The landscape quickly changed north of the Sénégal river: it turn from green to the dry yellow / pink of the Sahara desert. 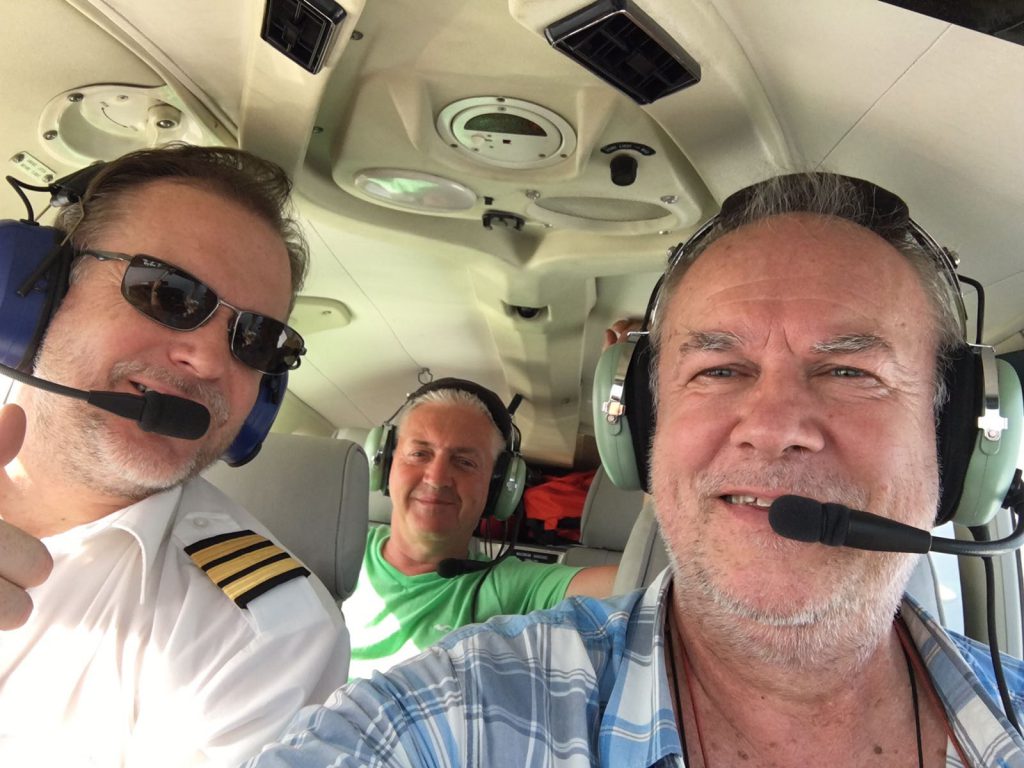 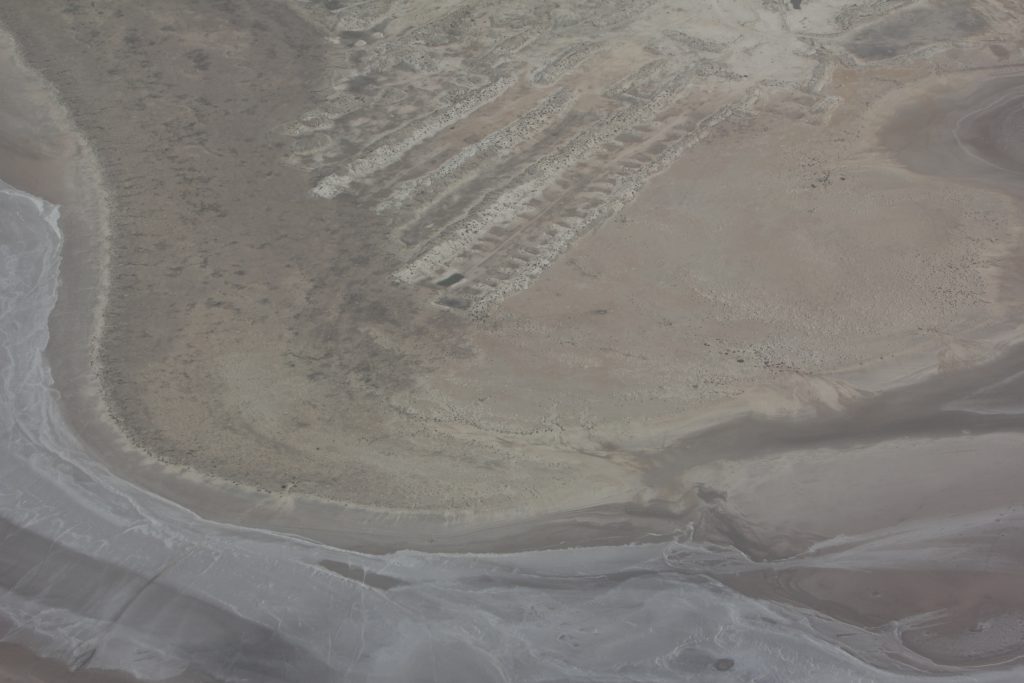 We remained at 5000ft and started seeing some civilization when approaching Nouakchott: until then, the desert was …. totally empty …. 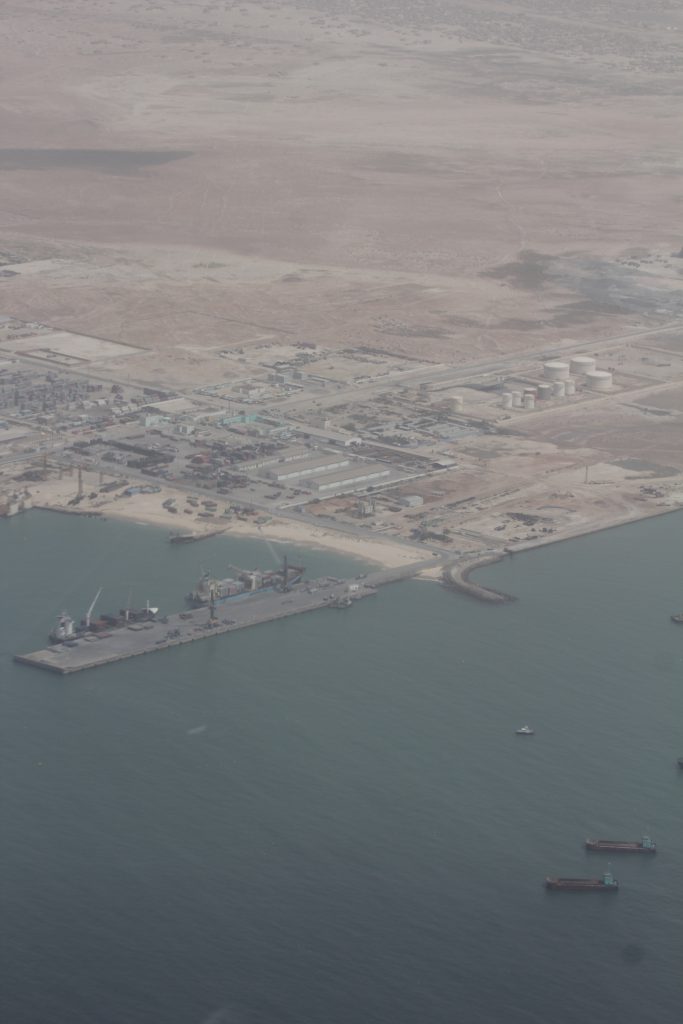 The deepwater port of Nouakchott came into view. 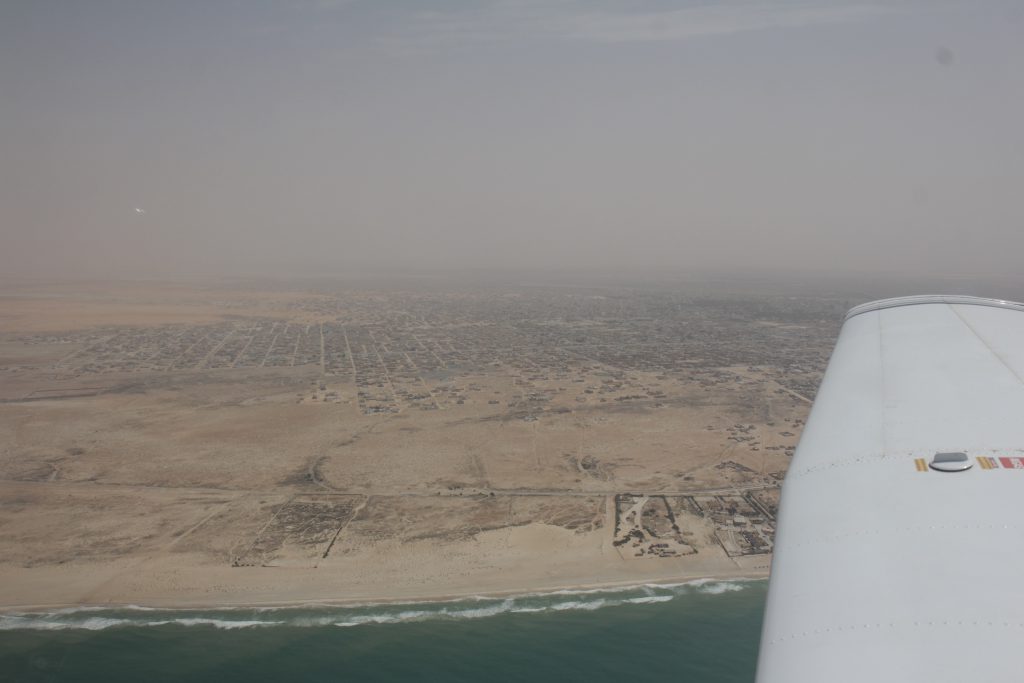 We had to avoid overflying the city of Nouakchott. 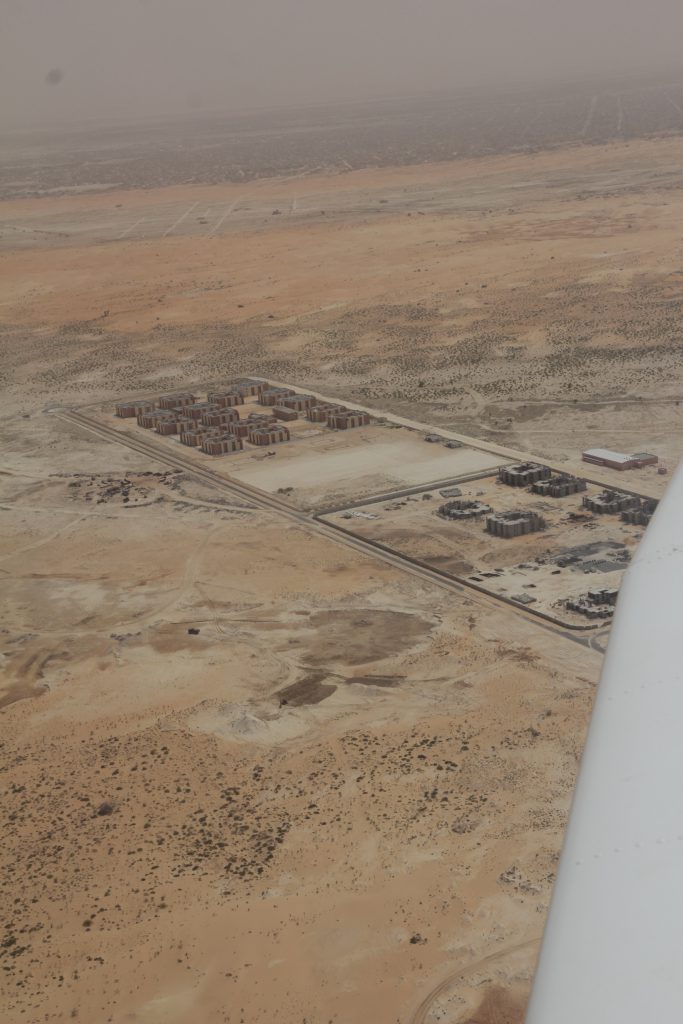 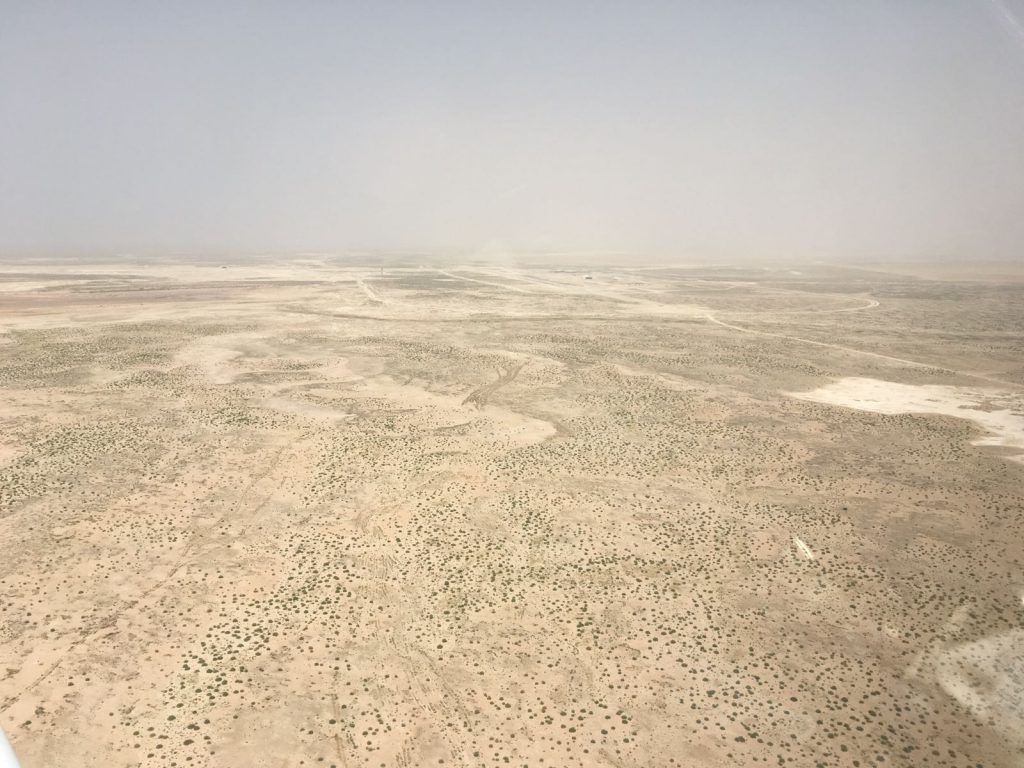 We descended and joined lefthand base for runway 34 at Nouakchott. 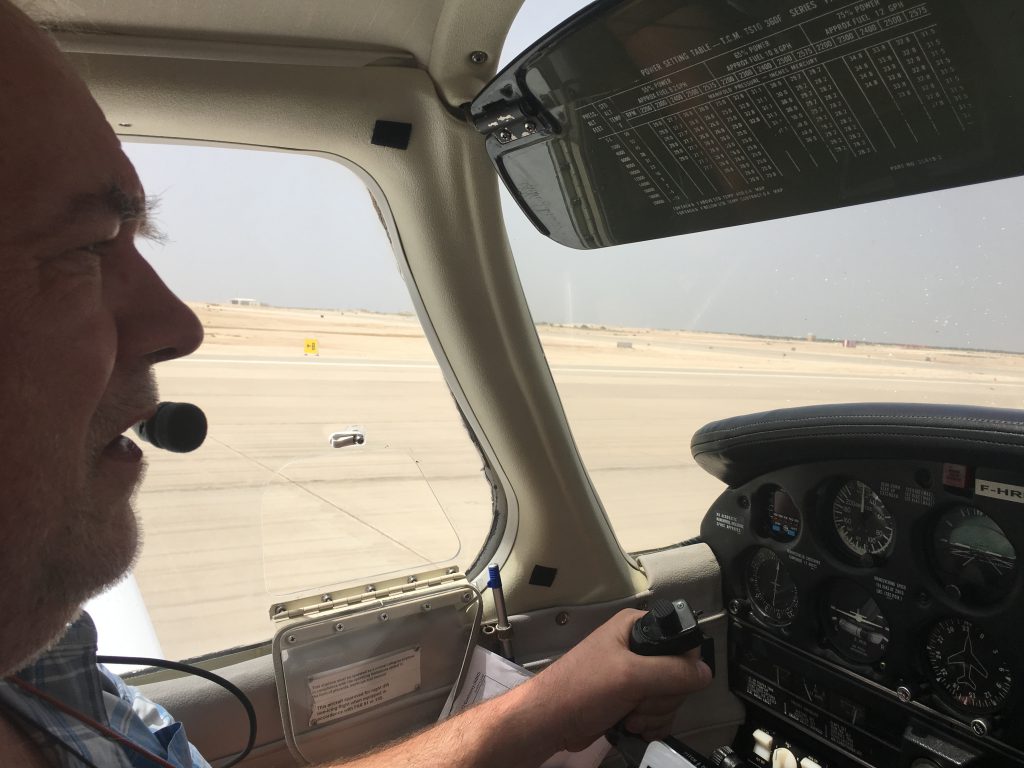 Fred landed Papie Charlie safely in a crosswind and we found ourselves in a very Mars-like landscape, in a totally new but empty airport. Eery feelings ! I opened the door and a dry 40°C wind hit all of us in the face. Yes, we were in the Sahara desert. 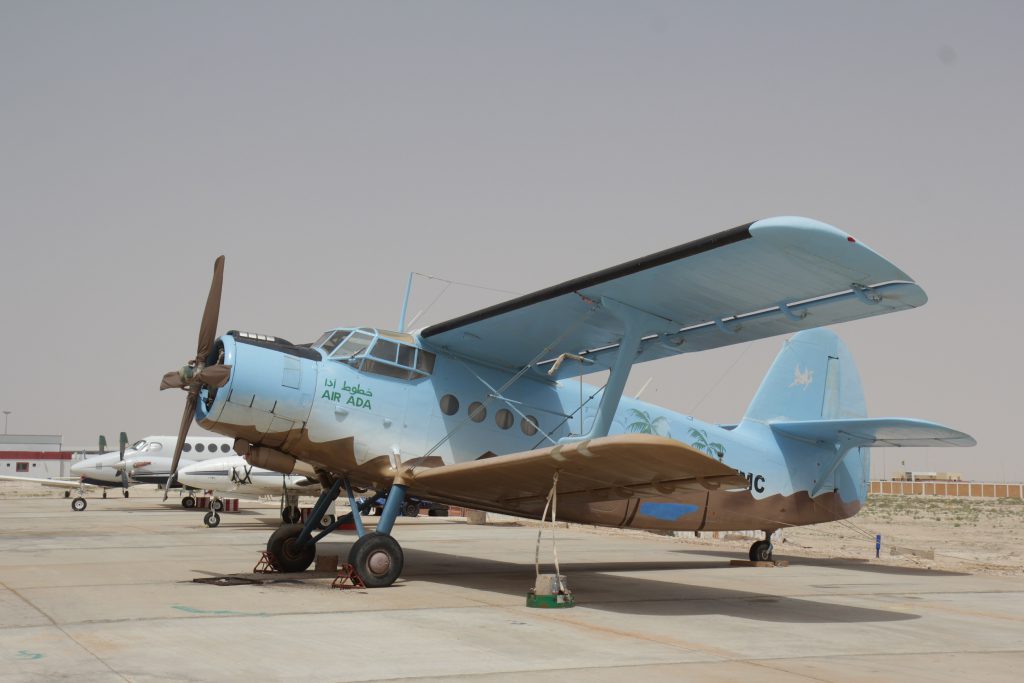 We parked amongst a series of exotic other models, including above Antonov 2. It is for sales by the way, in case an interested buyer read this. The UN had a Beechcraft 1900 parked here too. 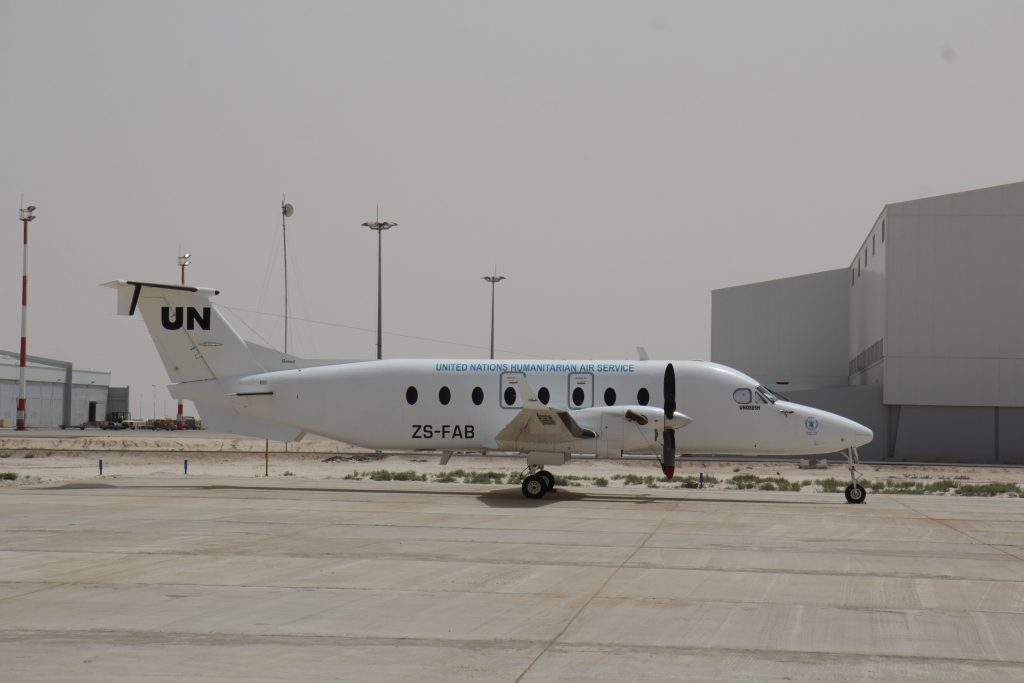 We unloaded our stuff in the 40°C wind and started cooking. We decided to not refuel, otherwise we had to buy a complete vat of 200L AVGAS, while we really only needed 90L. 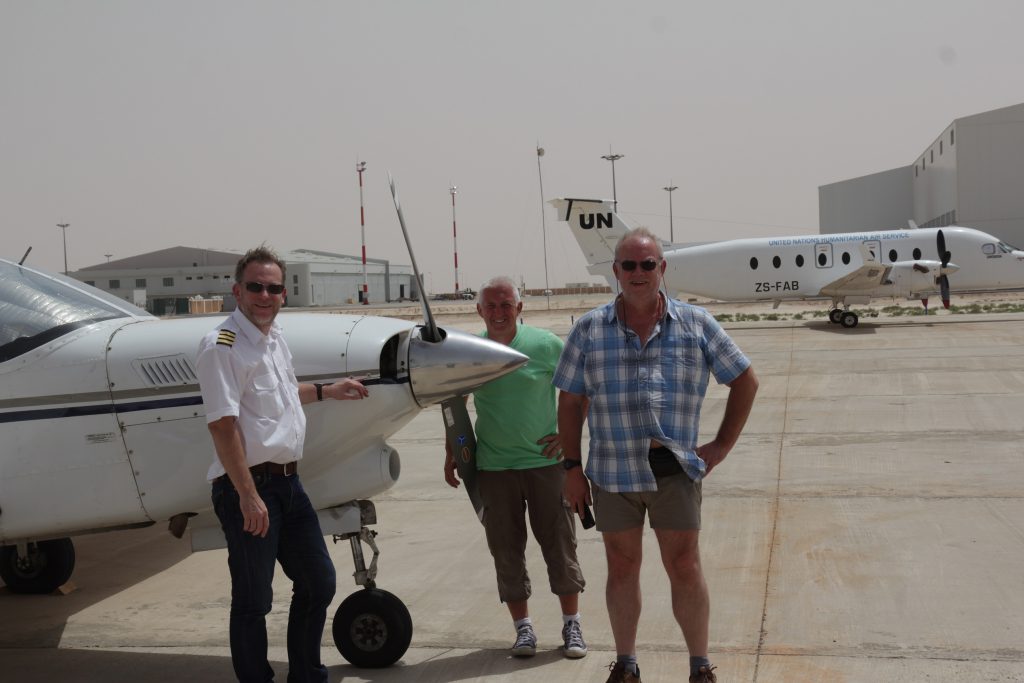 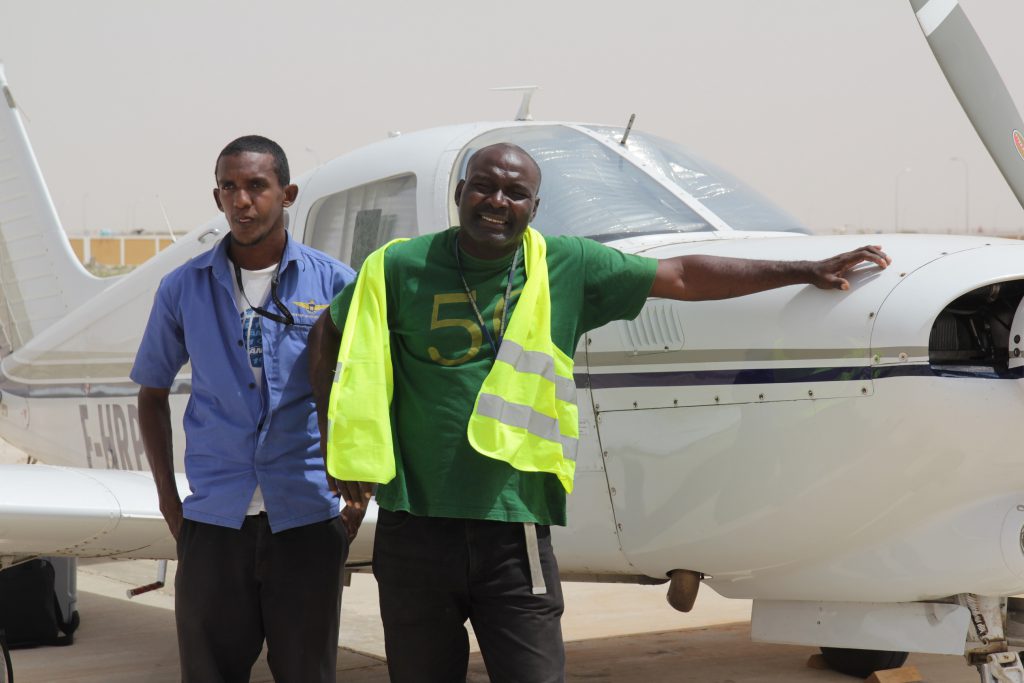 The fuel man right was friendly. The chap on the left looked suspicious. It was a feeling we would get more today.

We walked all the way from our parking spot to the terminal in the extreme heat & wind: at least 500m. It gave us an idea of the ordeal we would find ourselves in if we would get to crash land in the desert for one or another reason.

At the C-office, the official treated us very well and with respect. It actually turned out that the office who issues the overflight permits had made a mistake: they assigned the autorisation number twice: one to a helicopter from Noordzee Helicopter, OO-registered, and once to us. That had cause the problem, and they apologised.

We passed immigration by declaring that we are aircrew and that we don’t need a visum. We had to show proof with our flying licenses, and we got a nice fat stamp in our passport, without a visum :). The pilot bars at work!

The guys were so nice that one drove us from the new far-away airport to our hotel in the city center of Nouakchott. He turned out to be the Meteo responsible, and we paid him 20 euro for his service. 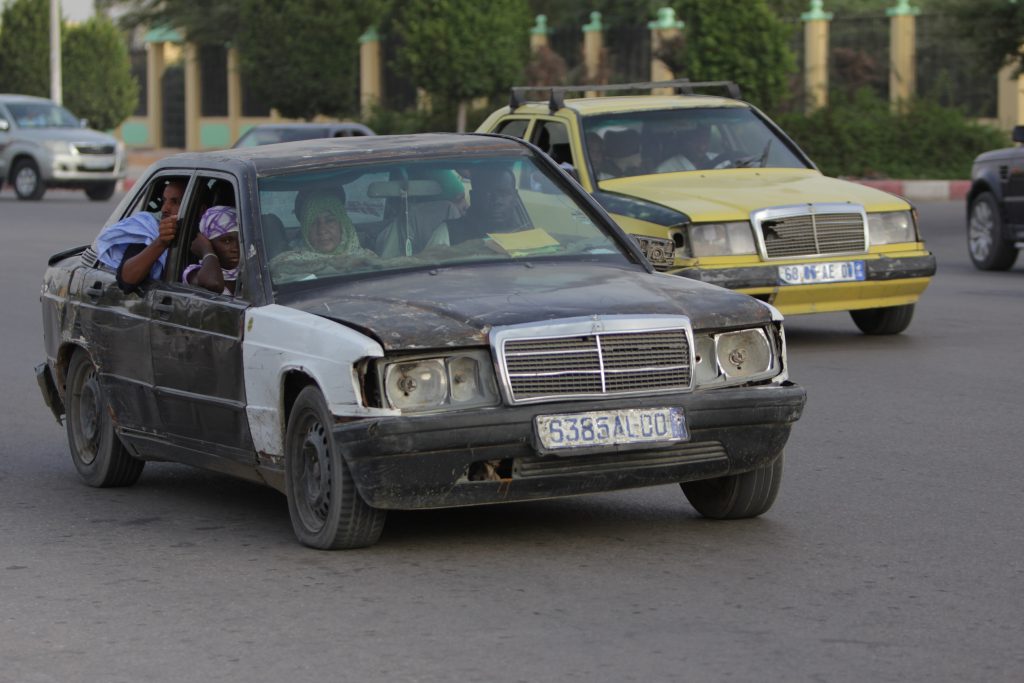 Not only are the drivers bad, the cars (almost all old Mercedes or Toyota) are in an extremely delapidated state. 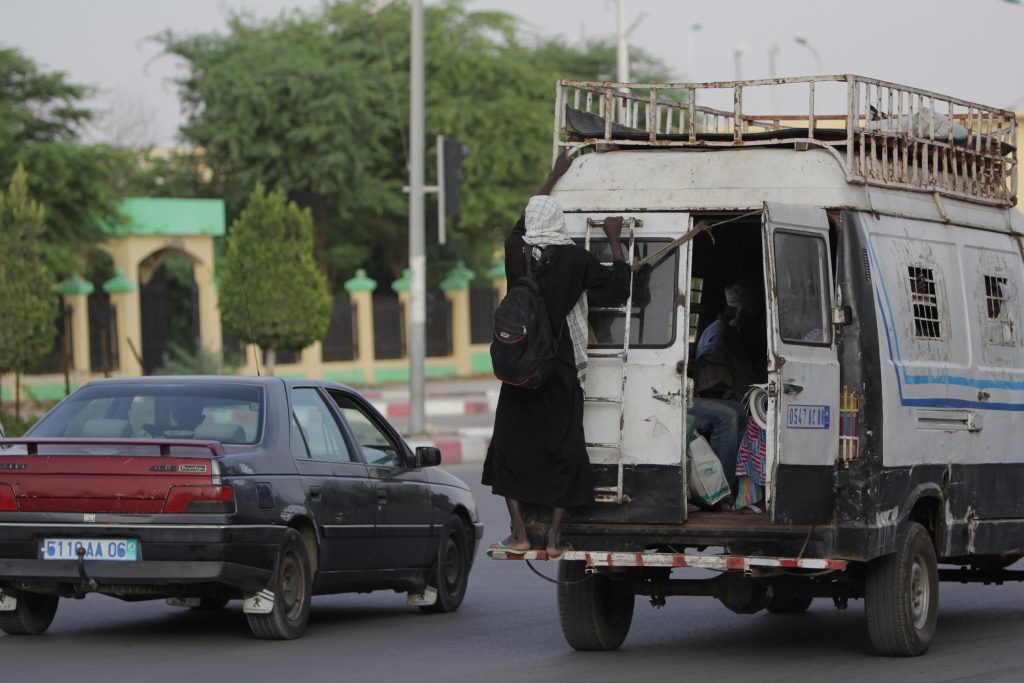 We took a rest and a swim in the nice hotel, and hauled a cab so we could visit the Fishing Port, one of the few attracttion of this new city. 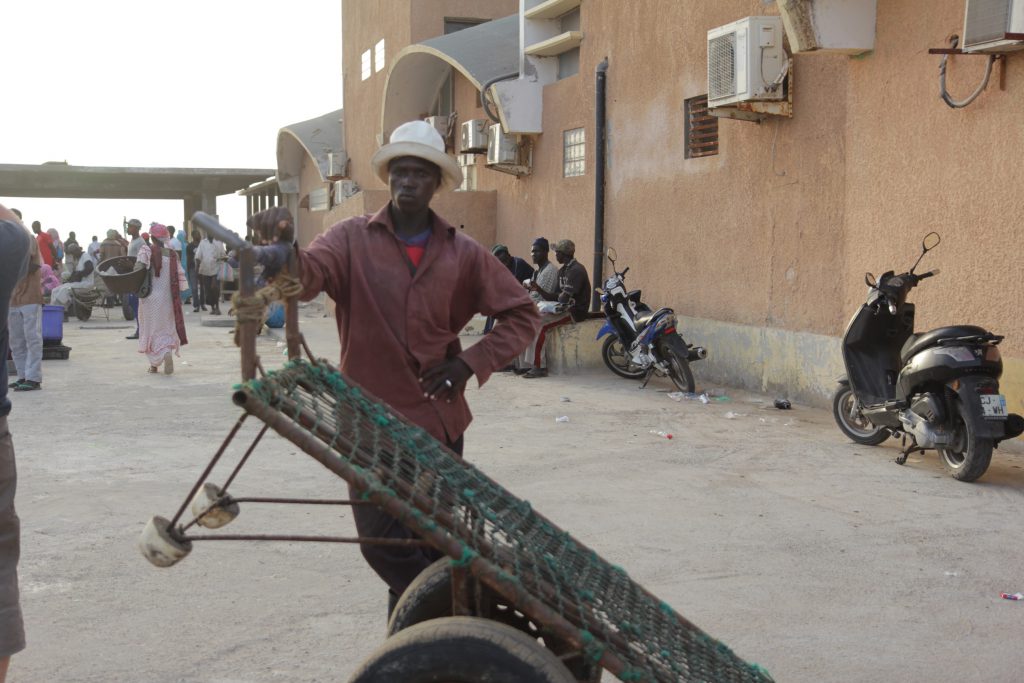 The Fishing Port was, just like yesterday, full of life, smells and fish… People were cleaning and gutting the fish, trading it and there was a nice busy chaotic atmosphere. We were the only tourists. People were looking suspiciously at us.

I started to making lots of pictures, and at a certain moment, a non-uniformed guy walked up to me, flashing a plastic card with the the words “POLICE”:

Damned, second time today that there is a lack of autorisation ! The anonymous policeman ushered uniformed colleagues and we were pushed towards the police station, in the middle of all the fish. At that moment, we downplayed our presence, acted nice, erased some pictures, etc and after a while the whole spectacle, which had drawned like 20 people around us, ended: we were free without paying and without having our cameras confiscated… just lost a couple of pics. 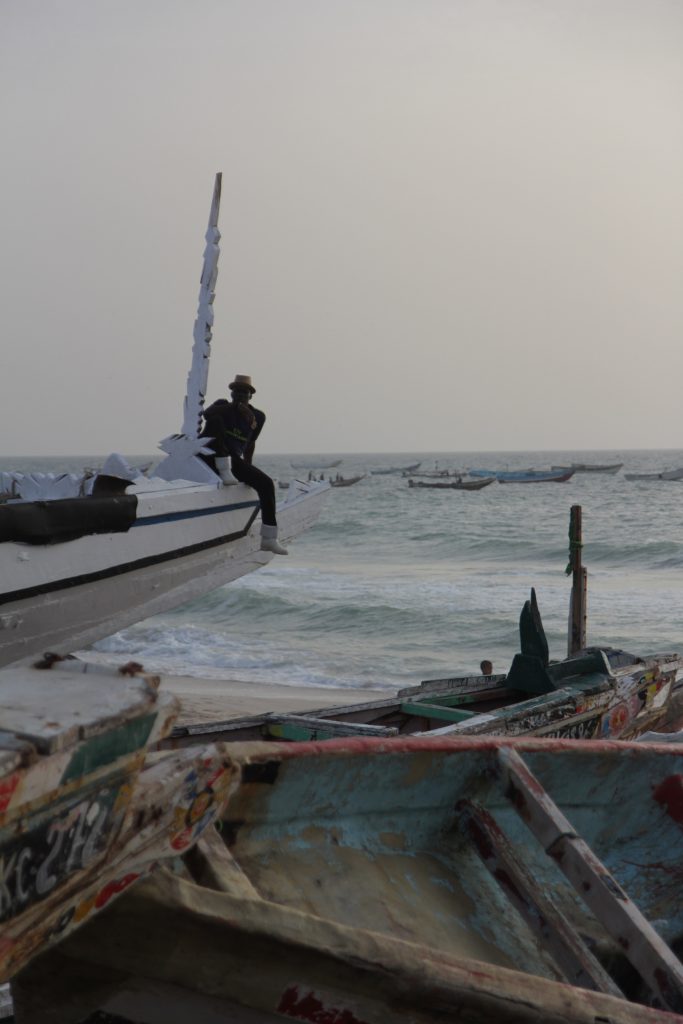 We drove back with a rather negative mindset. This is not a happy snappy normal country, but a poor  developing country where westerners are not always seen as nice tourists. 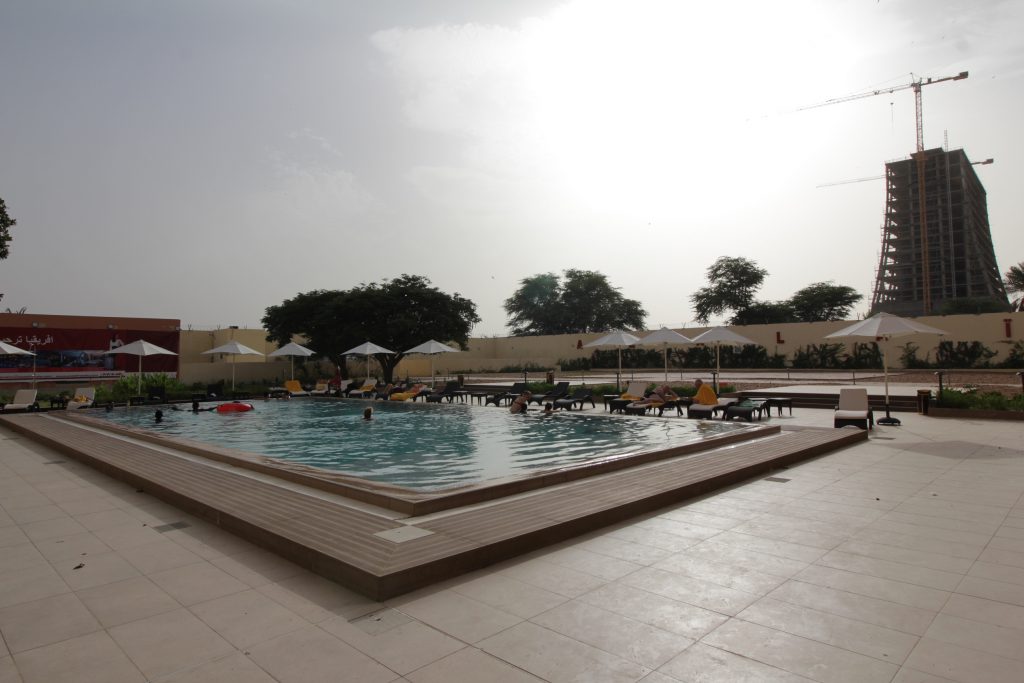 We ended the very exciting day with non-alcoholic beers and a well deserved dinner. 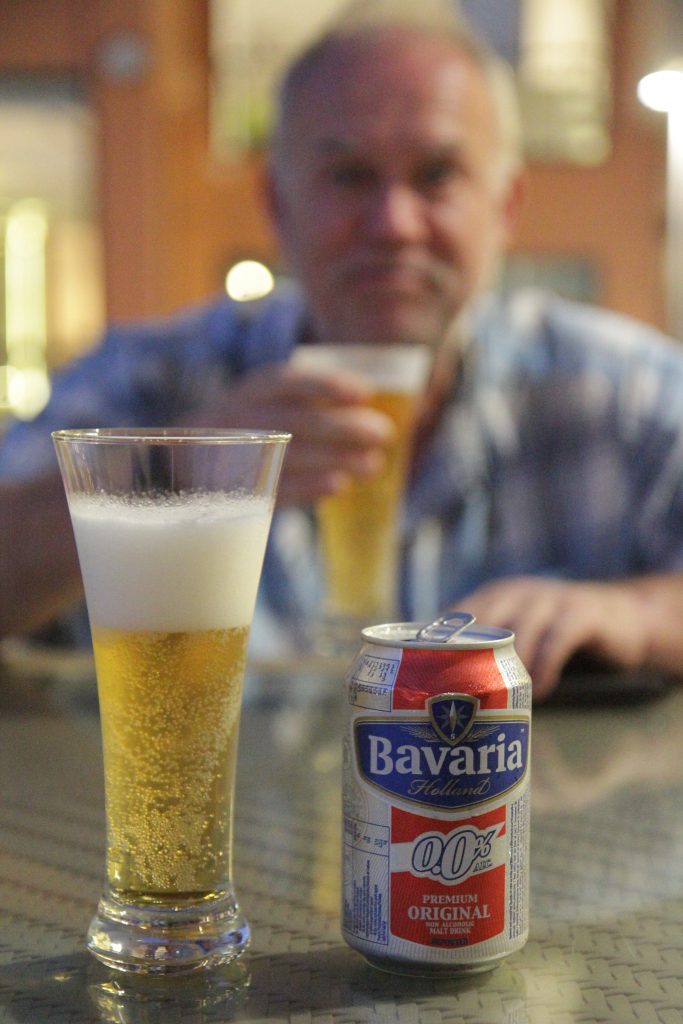 Tomorrow we fly to the Dakhla in the Western Sahara, a contested area administered by Marocco.

4 Replies to “Back from Africa – Day 2 – Dakar-Nouakchott”