After obtaining my private pilot license in Malaysia and doing some additional short field landing and take-off practice, it was time for the real work. It happened at that time that my brother and my future-sister-in-law were visiting Malaysia, and their last stop was the national park of western Malaysia, called Taman Negara. After their visit, the normal way to get back from that jungle to Kuala Lumpur was a one-hour trip by boat, followed by a back-wrecking 4 hour trip by coach. I was very proud to offer them a faster, more convenient and (yes) safer transport back to the capital: by airplane ! 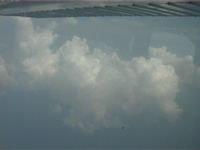 That day was in fact a rather hazy day … marginal VFR, let’s say. Flying east from Kuala Lumpur calls for entering VFR corridor 3 across the mountain range along the highway to Kuantan. Once passed the mountains in Bentong, the weather was much better. I climbed to 7500ft to avoid another high mountain, covered in cloud, north of my route. As always in Malaysia, we are under positive radar control from Lumpur Information. This implies that we need to do position reports at every major city or feature we pass. After Bentong, that was reporting in Temerloh and Jerantut. Once in Jerantut, the best way to find the airstrip in the jungle is to follow the river north and later northeast. No GPS, no beacons to help you here: your eyesight is your only available sensor information! My instructor helped me in composing a very basic airstrip chart. Check it out !

Check out this small movie on following the river to Taman Negara:

The airstrip can luckily be seen by quite far as it is located in a bend of the river (Sungai Pahang). The approach procedure calls for saying goodbye to Lumpur Information and closing the flight plan when in the air (if something happens after that, you are on your own in the midst of primary jungle…), then check out the strip from the air, do a low pass to chase away the wildlife who loves to camp out in the clearing, and come back quickly to land.

Check out this small movie on taxiing into Taman Negara airstrip:

Well, if the procedure prescribes this, that’s what I did. I landed safely on the red gravel strip and taxied to the run-down shack that ones had the ambition of becoming a terminal. I had called beforehand to arrange for a boat to pick me up at the strip to go to the resort where my family resided. The two guys were due fully waiting and they seemed startled to see me getting out of the airplane. They probably never believed anyone would come to land here… 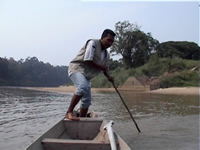 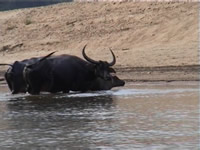 The short boat trip back the resort was quickly bringing my mind into another state: the state of water buffalos, kingfishers, gigantic trees, orang asli, shouting birds and hot humid warmth. At the resort, my brother and his future wife were happy to see me, and I, in fact, was also rather happy to see them after their long trip around the peninsula. We did the traditional night safari, and got to bed soon. 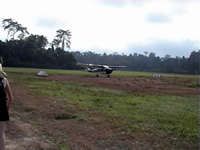 The next morning was partly cloudy and perfect for flying. We asked if the normal shuttle boats could drop us off at the airstrip. When approaching the airstrip, I was happy to see that no water buffalo in the neighborhood had developed an itch as my little airplane was unharmed from the night sleep in the jungle.

After the normal ritual consisting of loading the airplane, checking the plane and the fuel, strapping in and following the checklist to start-up, we taxied to the end of the strip and took off west for the hop back to the nation’s capital. Although the weather was OK up to Genting Highlands, as soon as we entered the Klang valley again in KL, we were in really bad haze, so I had to request a special VFR for entry into Simpang again. They even lit up the runway for me !

This was one of my best experiences ever: a useful flight, with some challenges and adventure, but carefully prepared and executed.