My JAR PPL(A) Class Validation was due for renewal, and according to the law, you have to fly one hour with an instructor to become current for revalidation. Having taking heaps of instruction for my instrument rating lately, I asked Danny, our club’s instructor, what my best options would be. Both having a beer at the club, he answered that some aerobatic exercises are a nice change in one’s training curriculum. Additionally: it sharpens your basic flying skills and gets you prepared for possible upsets when flying ‘normallly’.

And so we set out for an hour (!) of acro training. Danny arranged the Propeller’s acrobatic Robin 2160i – OO-JBO. This two-seater is re-inforced to allows for aerobatic footwork and is equipped with a 160 pK powered engine. I asked for Belflyer to join me as he was interested in some acro-work as well.

Danny briefed us on what to expect: just some basic maneuvers. Nothing to be scared off… I had prepared myself with some theory from the internet, but basically nothing can prepare you for your first g’s. It is truely overpowering! 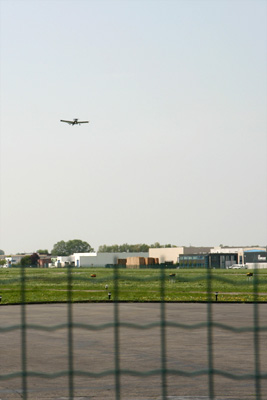 But before I experienced g’s, we positioned ourselves above the Kortrijk-Bossuyt canal abeam Zwevegem at around 4000ft. This canal gives us a nice straight line, helping orientation.

The first figure we tried was the simple looping: dive 30° from straight & level, when reaching 250 km/hr, pull up sharply until fully inverted. Expect plenty of g’s (I did about +4 g). Release bit on top to ensure enough momentum to continue the turn. Pull again when going down and relax when 30° above the horizon to regain original altitude. Wow! Was that fun ! 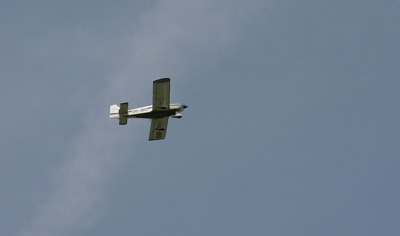 We exercised this figure a couple of time above the canal. Than Danny thought me a simple roll, which turned out to be less simple … When combining a looping with a roll on top to straight & level, you performed an Immelman ánd you turned 180° while gaining altitude: there seem to be no disadvantages (at least not for now). We tried a couple of those. I was getting momre and more at ease with the concept of aerobatic flight… !

Next was a classic barrel roll: basically combining the roll and the looping in one fluent maneuvers. You describe a cork-screw in the sky … and it feels like that too!

Danny instructed me to do a couple of clearing turns. I started it nicely, but then he advised me to do it the ‘very steep turn’ way. I did that, and than Acro hit me: I felt nauseated after tow of those, and we did some normal flywork so I could regain my normal self … I never did anymore however, so we continued the flight under a more normal flight regime.

After all it was a great experience, and I definitely want to expose myself more to Acro … but not anymore in slots of 1 hr…