I discovered a new interesting service to renter-pilots in the USA: OpenAirplane. This service overcomes the well-known problem for pilot-renters to have to be checked out by a local instructor every time you want to rent the same aircraft at a different location. OpenAirplane has prescribed a hard check-out to which all member aircraft owners in the US agree with. You only do that hard check-out once a year at a location of your choice, and you are good to rent your aircraft wherever in the US. You also need an adequate insurance coverage as a renter.

As I wanted to go flying again in Atlanta, and I foresee that I will rent elsewhere too, I did the OpenAirplane check-out. I choose Centennial Aviation as the provider of a rental aircraft. On the evening of my check-out, Capt. Rohan Bahtia really put me to test: booth for theory as well as for practical flying. I also wanted to obtain the IFR checkout. He started with the discovery of major sections of the AIM, decoding sectionals, IFR charts, airplane performance … the whole nine yards. I was under examination stress for a mere 2 hours !

Capt. Bahtia runs a tight ship: he teaches flying to young kids (as young as nine years old!) and offers this service to parents who only want the best for their kids, and who want the kids to understand discipline. Rohan combines the flair of knowing how to teach to kids, combined with the discipline required when dealing with all aspects of aviation. On top, I like his business model !

But back to the check-out. Next step was the practical flight test, and during the theory check, he had promised me some real though flying ! It was almost night, so this check-out would be conducted partly under darkness. On top we had to do both VFR and IFR checks. This was going to be fun ! He operates a nice Cessna 172 SP, tailnumber N376SP. It’s equipped with steam gauges, but also features a GPS, an MFD, a Stormscope, and autopilot and TIS. 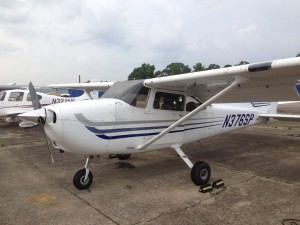 We started with some simple airwork north of the Peachtree-Dekalb airport (KPDK). Then he asked me to fly at 0 knots… Duh ??? So we configured the aircraft for slow flight, with full flpas out, then I had to pull the power back in the range between stall horn and real stall. And then just a little further, and again a little further. This went on until we were barely flying, on the edge of the real stall, and where there was no noticeable airflow into the pilot tube, making the speed indication falling to zero. This was fun!

We covered the full OpenAirplane checkout including multiple touch-n-goes, and then he started the airwork he had promised to me: he wanted me to fly without (or with blocked) primary flight controls (no elevator or aileron, just rudder, throttle and trim) and with a partial panel (covered up directional gyro and artificial horizon). And he made me perform a VOR approach, at night, under the hood onto PDK. We built it all up one after the other: first some time to get used to flying without primary flight controls, then he added the partial panel under the hood, and then we started the VOR approach. I kid you not: this was the reality, and it did work ! You can steer an airplane down a VOR approach by throttle, rudder and trim only. You can find your way around without directional gyro or artificial horizon, as we got trained on during our instrument training. Even for landing there is a special technique for not having to use the elevator: just at the flare, you give a nice pull on the trim wheel, making the nose to pitch up in the right flaring attitude. And BANG: we were on the ground. Waw: what a checkout. Highly advisable to everyone !

So now I got checked out for all OpenAirplane-affiliated aircraft rental places in the US!

One Reply to “OpenAirplane Checkout”