While Atlanta is certainly an important city in the south of the US, you can still go deeper, you can go more southern. You then enter the states that do require a southern accent, a southern brawl: Alabama, Mississippi, Louisiana. The most southern city is New Orleans, the birthplace of jazz, situated on the estuary of the river of the Blues: the Mississippi. New Orleans is known to be under French influence. They celebrate Mardi Gras for carnival every year, and in Bourbon Street, you can have a party every night.

I had always dreamed of New Orleans to be an ideal flight trip destination from Atlanta. After my earlier trips to North-Carolina (Kitty Hawk) and South-Carolina (Myrtle Beach), it was time to discover the deep South and fly to New Orleans. I also wanted to have a small short taste of the New Orleans experience because people in the US get a weird smile on their face when you ask about it! 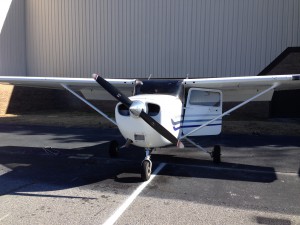 Once the destination is picked, the fun begins! First I had to book an airplane to do the flight. As I had done my OpenAirplane check-out with Centennial Aviation out of the Peachtree-Dekalb (KPDK) airport in Atlanta, I decided to rent their nice Cessna 172 SP again with tail number N376SP. Captain Rohan set me up with the plane for a whole weekend, so I had flexibility in my planning. N376SP is a 180 HP Cessna 172 with steam gauges, but equipped with a KLN94 GPS, an MFD and a KAP140 autopilot. Capt. Rohan warned me about the high precession of the direction indicator, about the INOP of the Stormscope and the INOP of the autopilot NAV mode. All of that would get repaired soon. 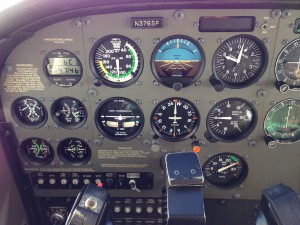 Next thing to check was the route and the destination. Flying onto the main international airport in New Orleans looked too complex, so I picked the nice business airport which has been built on land conquered from the Lake Pontchartrain: the New Orleans Lakefront airport (KNEW). I choose a nice local FBO (Flightline First) for fuel.  As for the route, I just knew I would do this trip in IFR again, so I surfed to the DUATS site and ask their computer to pick my route. Apparently nobody does that here anymore: people fly DIRECT here… while DUATS had picked V airways and VORs , the way I had learned to do.

I had checked the weather upfront on Wunderground, and over the whole of my route, fantastic weather was being promised a week out. The closer I got to the actual date of flying, the more this was confirmed, so it looked like I didn’t need IFR really, but how could I not enjoy its easiness … ?

When checked for OpenAirplane, the good thing is that you don’t need to be rechecked every time you rent an airplane. So on the Saturday morning of my planned flight, I could just hop into Cessna N376SP and depart ! And so I did.

After having obtained my IFR clearance (which was radically different than the one I had filed and programmed the GPS with … sigh), I taxied to the holding point of runway 3L and did the run-up. From a corner of my eye, I some something flashing by the side of the airplane: it looked like a running fox. I called the Tower to say I was ready for departure, and told them about the fox. They had it in sight and identified it as a coyote … Well, the first coyote sighting ever for this European … 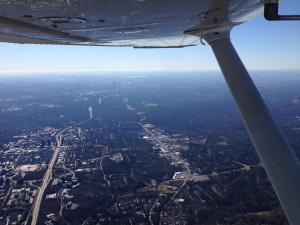 They vectored me all around the north of Atlanta while I climbed out briskly to 8000 ft, my chosen cruising altitude, and then set course southwest. I had forgotten to pee just before take-off, but I had my secret long flight weapon with me: two emptied Gatorade bottles ! 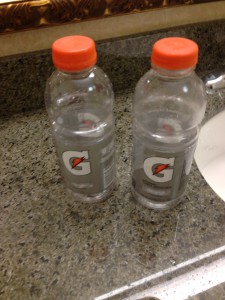 I cruised in perfect weather into the next state: Alabama and then it struck me: I had to turn the clock one hour back as they are on central time … no wonder time was passing by so elegantly slow. It was the first crossing of a timezone while flying myself. I listened to some Jazz music on my phone by putting the little wired speakers inside the earcups of my airplane headset: works wonderfully, does not interfere with ATC and you do not need special electronics for it! 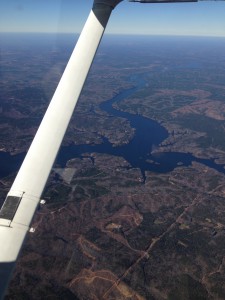 After leaving the Atlanta area, ATC cleared me direct Lakefront: my destination. In the meanwhile, the soft glowing south passed beneath me, interrupted by a limited amount of cloud, blocking every now and then my view on the many curvy rivers and lakes that scatter the southern states. Next to Jazz, I killed the slow passing time with precisely annotating my route on my paper sectionals. As I was on a direct routing, VORs and V airways didn’t matter anymore, so I enjoyed myself with matching the reality down below with the contents of my maps. 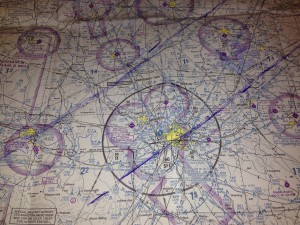 All of the sudden, something small and black hit my windscreen: no damage, but a loud noise. This must have been an insect of some sort, but what was it doing here so high at 8000ft? 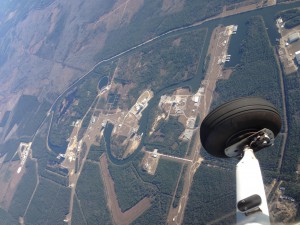 After a while, the coastline with the Gulf of Mexico came into view, and the bayous started sliding under the belly of my nimble Cessna. I was passed from Atlanta Center to Houston Center and then onwards to Gulfport Approach. Down below, I saw what appeared like a rocket launcher site. It turned out to be the Stennis Space Center NASA site, where they test rockets: nice. 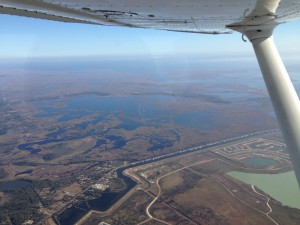 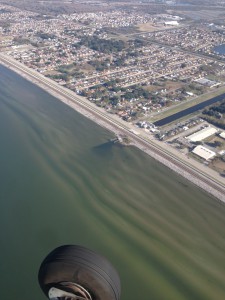 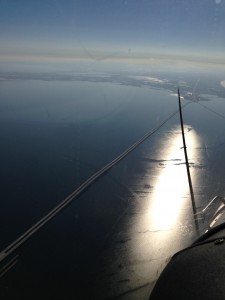 Soon after that I was passed to New Orleans Approach, and the stress increased: descending in some steps over the saltwater lakes and inlets surrounding New Orleans. Then flying accross the Lake towards Lakefront airport which stood out like a needle into the lake. 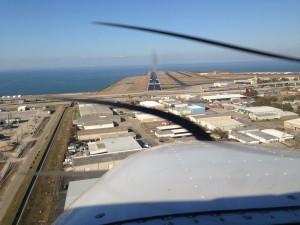 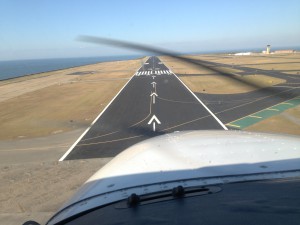 I was cleared for a visual approach to runway 36L. Base and final turn towards the lake. On touchdown I must have either hit the nosewheel first or landed with three wheels at the same time: anyway, it didn’t feel OK, so I did a go-around. Follwed by a right turn and then landing on the smaller runway 36R, parallel to 36L. 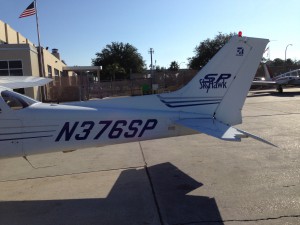 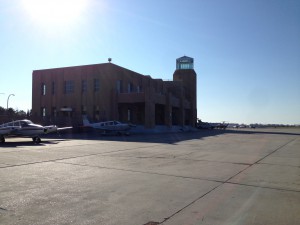 I had arrived in New Orleans, and it was only early afternoon! I taxied to the FirstLine FBO, and they helped me out with tie-down and fuel for a very moderate price. Europe simply cannot offer this level of convenience! 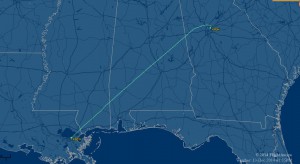 I took a taxi to my booked hotel. And set out to discover the most famous part of the city: Bourbon Street in the French quarter. Mind you, it was still daylight, but that street had already a strong buzz going ! I strolled it up and down, and sucked in the brewing atmosphere. That street is a a string of pubs, nightclubs, tourist shops, restaurants, all equipped with one or two layers of balconies made out of typical French metalwork. I settled for coffee with beignets. 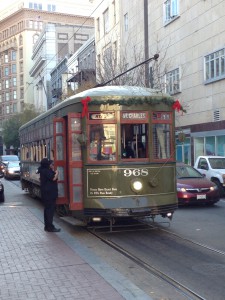 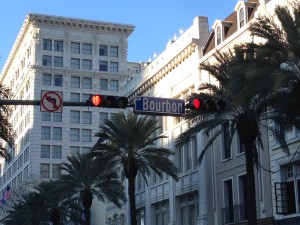 I prepared by flight back and took a little rest so I could attack Bourbon Street with a reloaded brain at night. And Oh Boy, did I need all my senses ! This street just exploded with people, all dressed up in Christmas figures, everybody in a super mood, live music flooding the street, police mounted on horses, mixed with religious people calling everyone to convert… you have to go there to understand this. American grass roots entertainment! 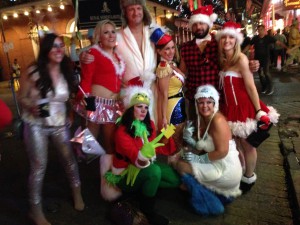 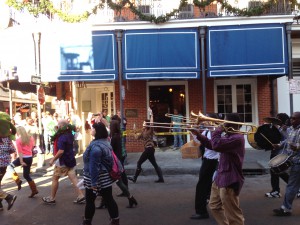 Despite the fantastic atmosphere, I got to bed early because I had to fly back the next morning. 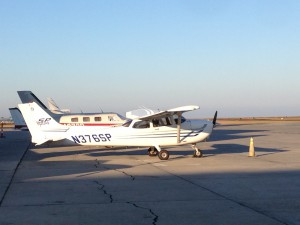 The Flightline First FBO had taken good care of my aircraft as it stood waiting for me already, fully fueled and eager to depart. I was also eager because the hour that I gained the previous day, I would loose this day. This time, I received a “cleared as filed”, so my GPS flightplan programming efforts were not in vain. I took off from runway 36L on this quiet easy Sunday morning where few people were in the sky. 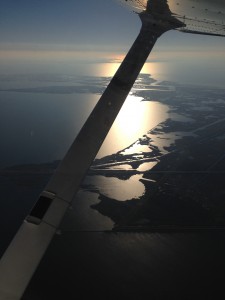 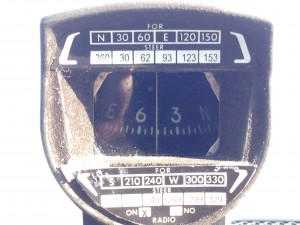 ATC offered my a long direct to Montgomery VOR, which I gladly accepted. This set me on a more southern course then the day before, so I also drew this one with blue ink on the sectionals. I settled for cruise at 7000 ft, got my music on and enjoyed the views of the bayous. Only one layer of clouds during ½ hour blocked my view, for the rest, the weather was fantastic. 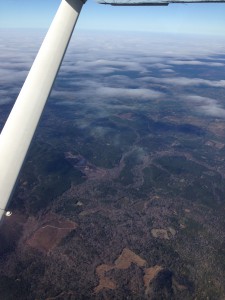 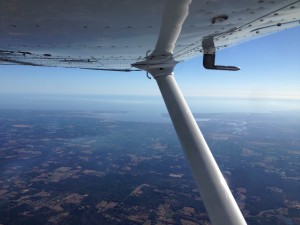 Near the Montgomery VOR, ATC gave a new clearance: direct La Grange VOR, and then expect the DIFFY TWO STAR. First time to receive a real STAR clearance ! The STAR brought me to the west side of Atlanta, avoiding the class B. Then northbound until clear of the Heartsville-Jackson International airport. In the meanwhile, I could descend to 5000 ft. I picked up the ATIS Romeo of my destination. Later they informed me that ATIS Sierra was active. 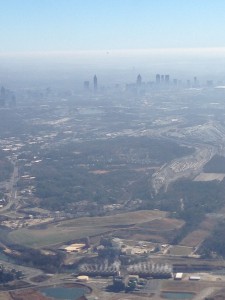 Vectors from Atlanta approach turned me eastbound north of the city. After a while, the skyline became visible in a layer of low hanging moisture. I got sight of the Peachtree-Dekalb airport and was cleared for the visual approach to runway 3R. No coyotes this time, and an uneventful crosswind landing ensued. I had a little trouble on the taxi due to the confusing airport layout, but ATC helped me out. 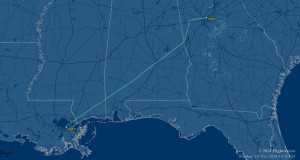 I got back nicely in time from a short but wonderful trip. I tied down the aircraft with a sense of pride that this hobby makes this possible. The return flight was somewhat shorter at 3h36.

Now I understand why people get that weird smile on their face when talking about New Orleans. And remember: Time flies slower in the South.