In the summer of 2007 we went on holiday to the south of France. We settled in the Georges du Tarn region, a beautiful area where the river Tarn carves a cañon out of a high plateau. As a dedicated GA afficionado, I checked out all aerodromes in the area. In fact, I found one on walking distance from our house in La Canourgue! 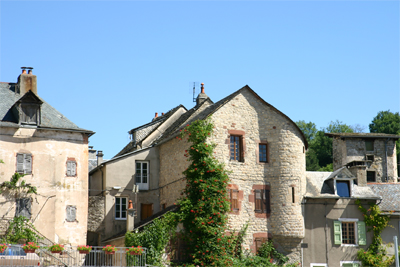 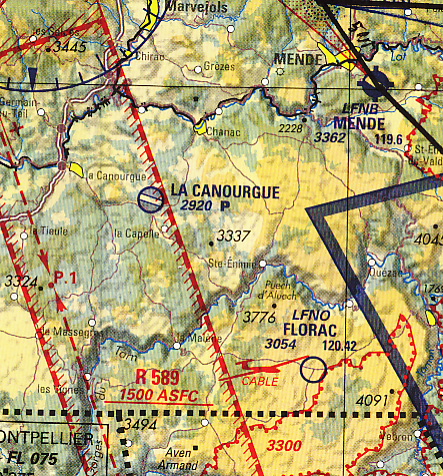 Of course, this aerodrome “La Canourgue” needed to be thoroughly checked! I follwed the signs… 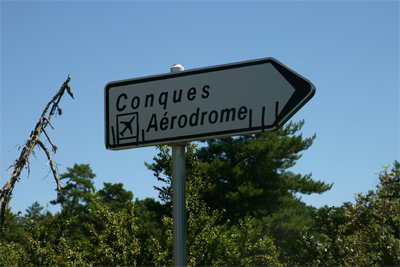 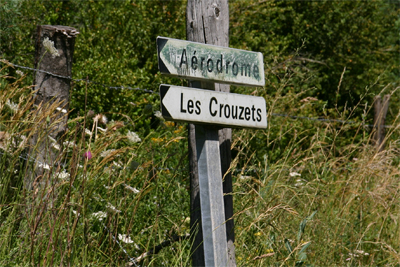 But what was wrong with those signs ??? All of them were covered or made unclear … it felt like the locals were ashamed of this airfield ! 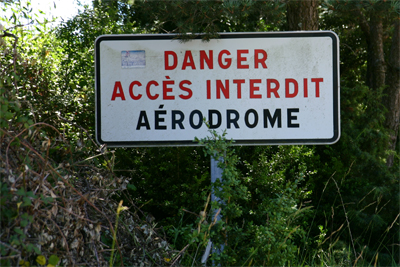 When approaching this arifield, visitors were warmly welcomed: “Acces forbidden” ! I felt so welcome already !

As a trained aviator, I could not be stopped by such ugly signs, so I continued and walked towards the holy concrete of the airstrip. It was set beautifully amongst the hills, showed copiuous upslope for a fast stop when landing and allowed to be quickly airborne when taking off from this rather high altitude when it is hot and humid outside. 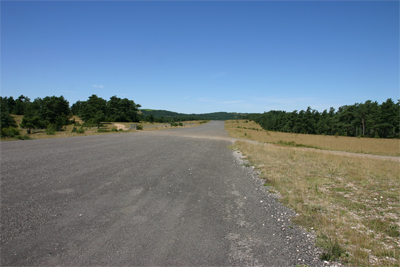 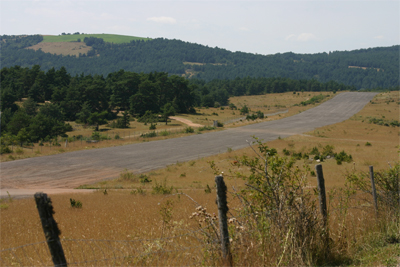 Buit that concrete was truely delapidated: full of stones, markings were hardly visible. It was immediately clear that it had not been used anymore in a very long time… Question was: why?? 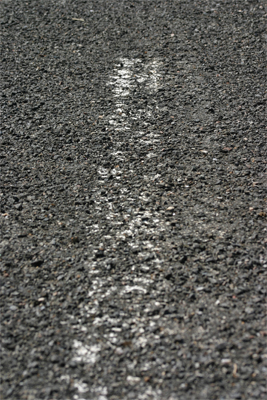 The windsock was let down… 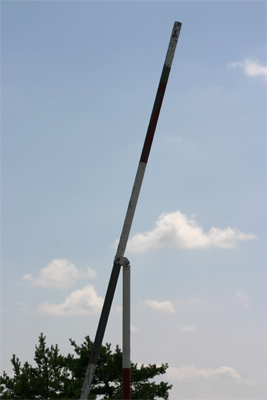 This was this bizarre rooster locked up in a cage, sitting very close to the runway … Who would put a rooster there ? and why ? I started to feel eerie and caught myself looking behind me a couple of times. I was still on a “Access Forbidden” area, you know … 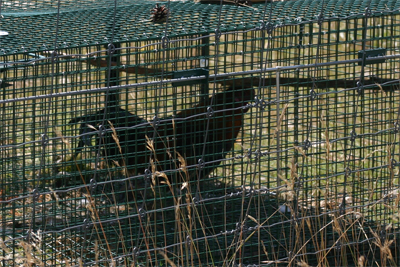 I discovered a telephone booth near the runway. The phone was ripped apart… 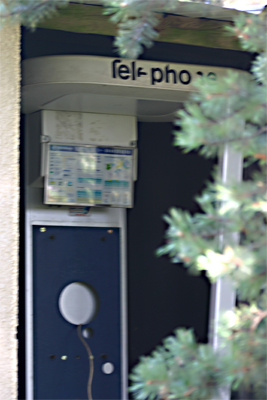 There was an old waterpump installation and pond that might one day have served as a source to fill up a Canadair waterfighter on his way to a blazing forest fire in the area … or am I just fantasising this??? 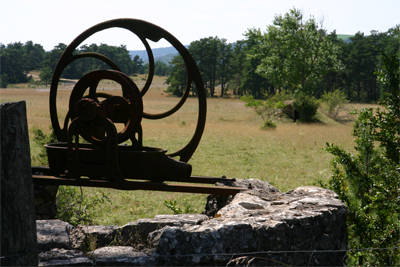 As a real discoverer, I took careful notes (see below) on my topographical map. The map didn’t have the airfield indicated. As the map was dated from the early eighties, the airfield ought to be younger than this. 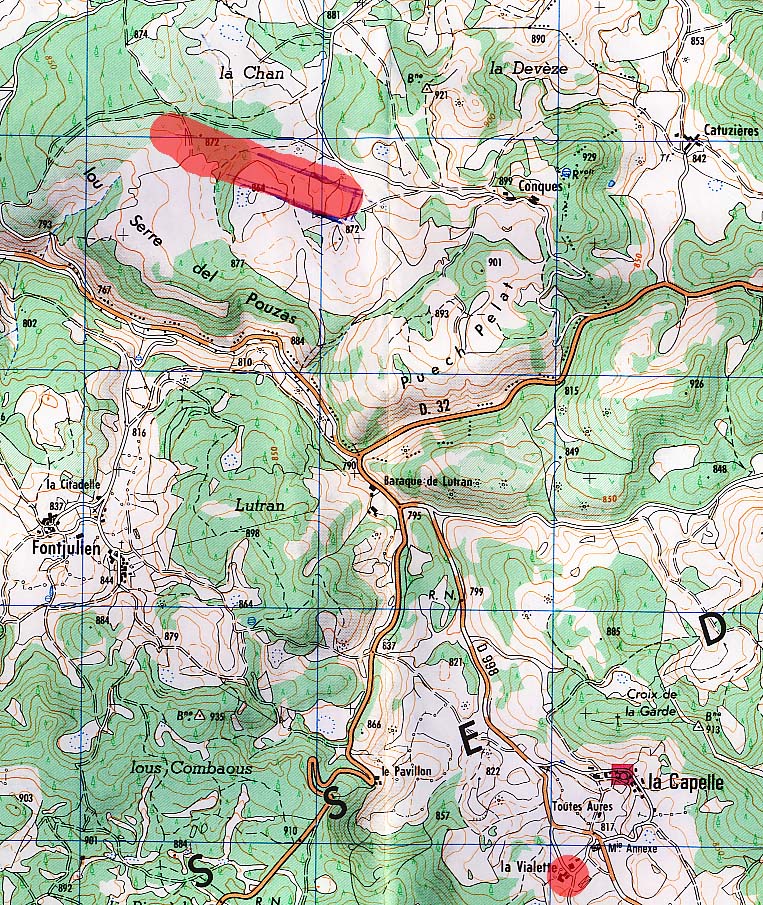 Every here and there, I found empty cartouches in teh grass, clearly indicating that someone had been hunting here. Was this hunter still here? Would he be looking at me at this very moment through his visor? Time to get out of here !

I had never felt so unwelcome on an airfield, and I have seen many already. 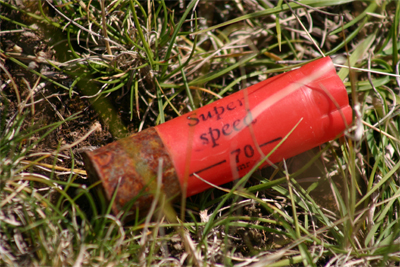 When descending at the other side, I passed this lovely littel village. Would these people have a hand in the demise of the airfield of La Canourgue? Would these be Greenies, who could’nt stand the aircraft noise anymore and who would have done anything in their power to close the airfield? 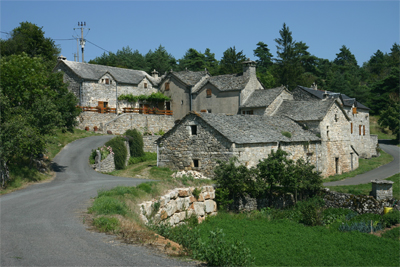 At home in our holiday residence, I asked the local guy what was worng with this airfield. What was wrong with the picture? Why could a beautiful airfiled like that be subjected to the nature elements and a hunter?

The old man started his first sentence with a sign. Here was a long story coming: at the time in teh late eighties, early nineties, the president of the Languedoc-Rousillon region was a person who lived in La Canourgue. He had access to spare money from Europe (regional development funds, you know) and decided to do some development of his paternal village: under the excuse of the danger of forest fires, he bought some lands up in the hills and had an airfield made. The excuse was that the firefighters (les Canadairs) needed an airfield in the region in case of local fires. However, the primary use of the airfield was to serve as a local landing strip for his corporate aircraft he had to serve his function os presient of the Region! Of course, this created a lot of jealousy and people turned aginst the airfield. There was never any serious use by the GA community either. When this politicians days as president were over, he gave a hunting concession on this airfield to his friend. This guys decided to erect a fence to keep the game close to his barrel. This fence was built way too close to teh airstrip, seriously affecting the safety, so the local community decided in their infinite wisdom to close the airfield on the basis of safety …

What a sad story !

Being back home in Belgium, I check the airfield on Nav2000. This is the extract (in French):

One Reply to “The Secret of La Canourgue”