Hello all, thanks for following this blog and for your encouraging reactions!

Today we had gorgeous weather for our trip from Dakhla (Western Sahara) to Tan Tan (south of Marocco) ! And fantastic weather, combined with the breathtaking views of the Sahara & the Atlantic and all the quirky views that exist where both of them meet, created a magic potion of beauty !

The day started uneventful. We chatted a little over breakfast with some other french tourists in our guesthouse in Dakhla, and the lady-of-the-house brought us back to the airport. Bruno, our third pilot, had left the guesthouse earlier that morning. The rest of our journey will be flown by Fred and me.

VFR flying through Marocco is a matter of following predetermined routes. So we had set out a route along the coast. Plan was again to fly low, slow and economical. Today was my first flying day, and it would be the longest flight of the trip so far. 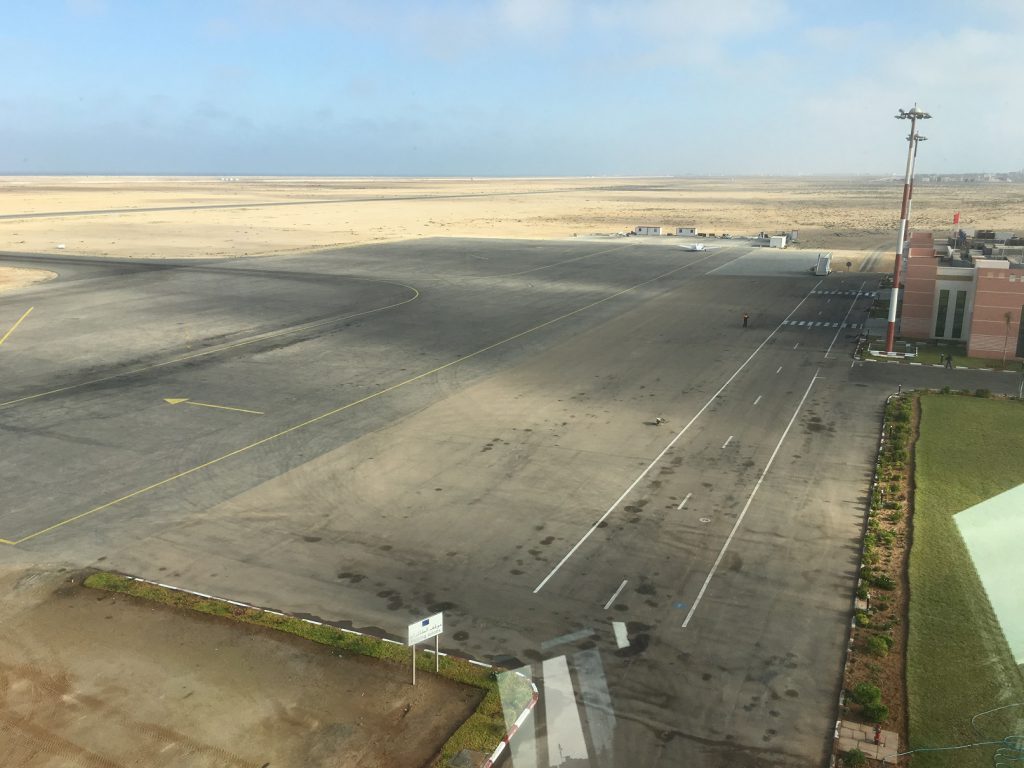 We deposited our flight plan with the already well-known military controller at Dakhla airport. In that plan, we indicated all the VFR reporting points. The whole flight plan form was completely full – so many points we had ! Above you see the view from his tower. Papa Charlie, our Piper Turbo Arrow 3 had spent the night on the tarmac (barely visible).

We took off from runway 03 and as soon as we were over the bay of Dakhla, we could discern large flocks of flamingos flying around. The pink of their feathers contrasted beautifully with the aquamarin color of the bay.

A little further, we saw other colors over the water: kite-surfers were doing their sport over the shallow waters. Their bungalows are embedded into the sand dunes bordering the water. It was like a dream from the air !

A bit further north, we started tracking the coastline at 1500 ft. Our friend at Dakhla tower made us switch over frequencies to Canarias Control: Spanish air traffic control from the Canary Islands on our west. Despite the distance from those islands, we were quickly in contact with them (even at 1500ft), so they must have repeater stations on the mainland here.

These were the things we saw popping up along our route: 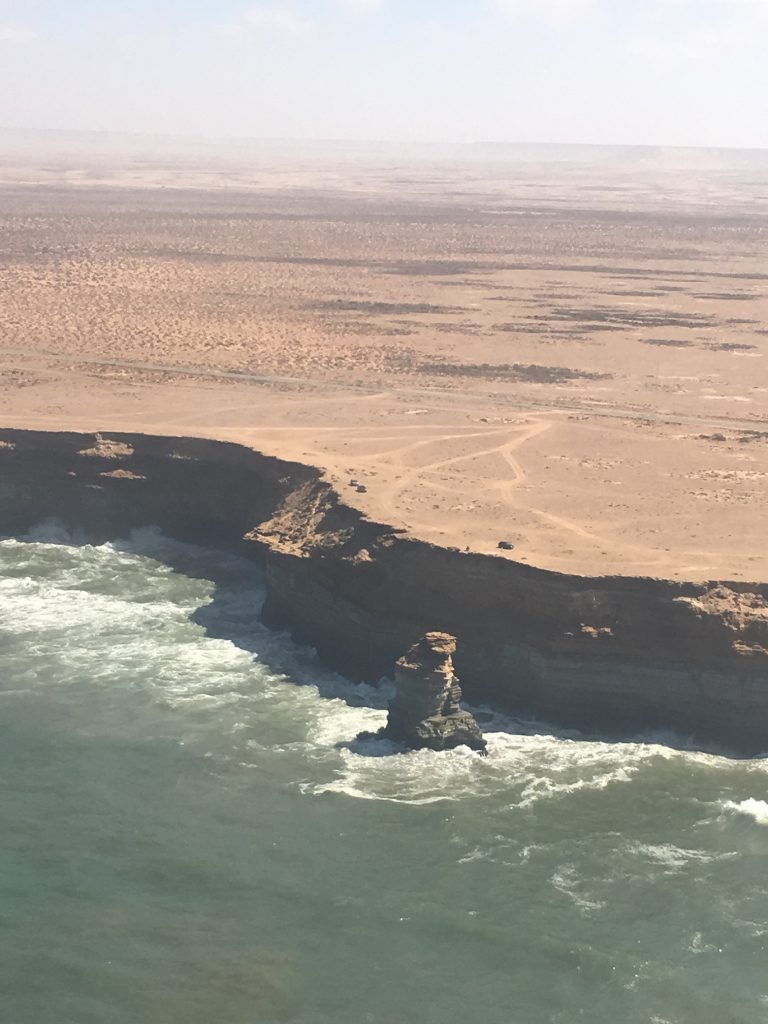 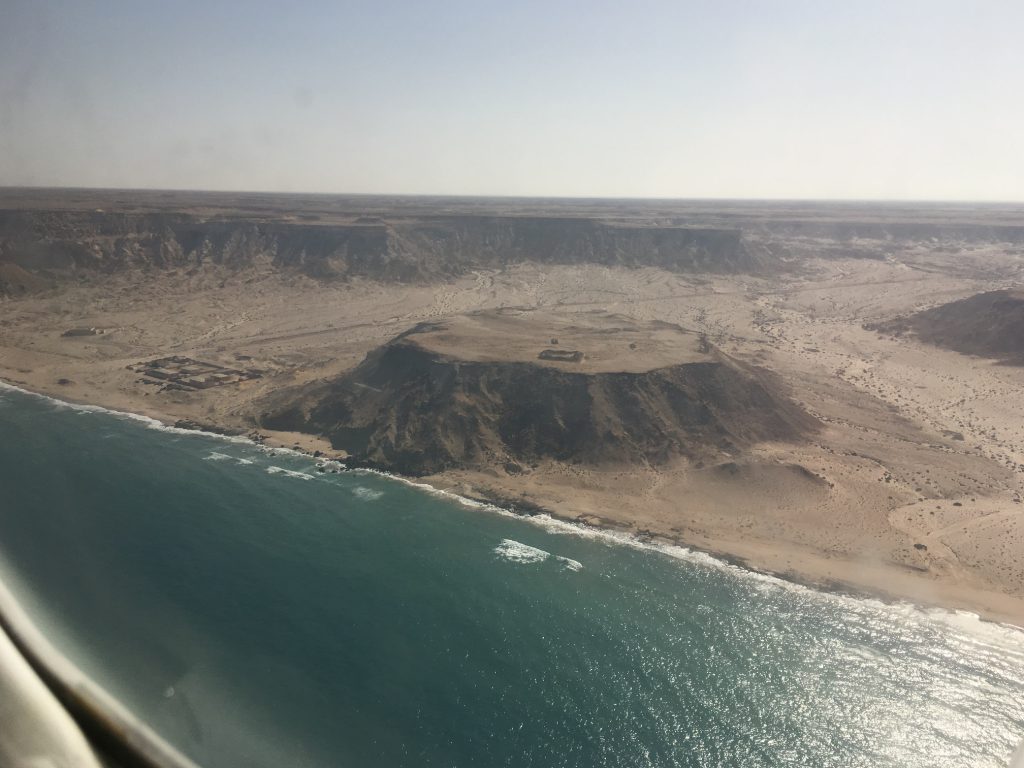 My copilot Fred spontaneously came up with this poetic sentence to describe his emotions: 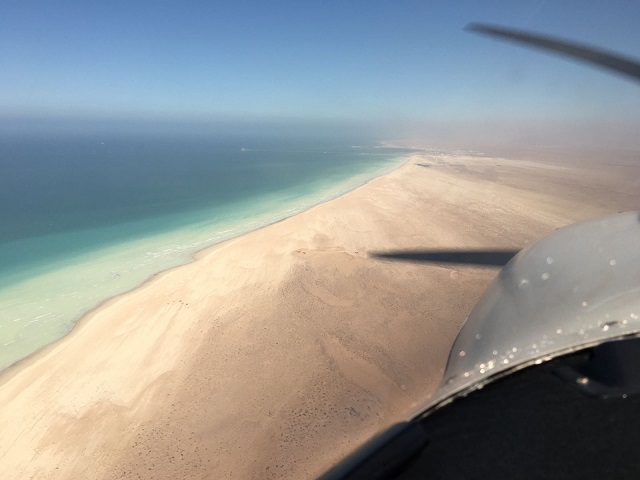 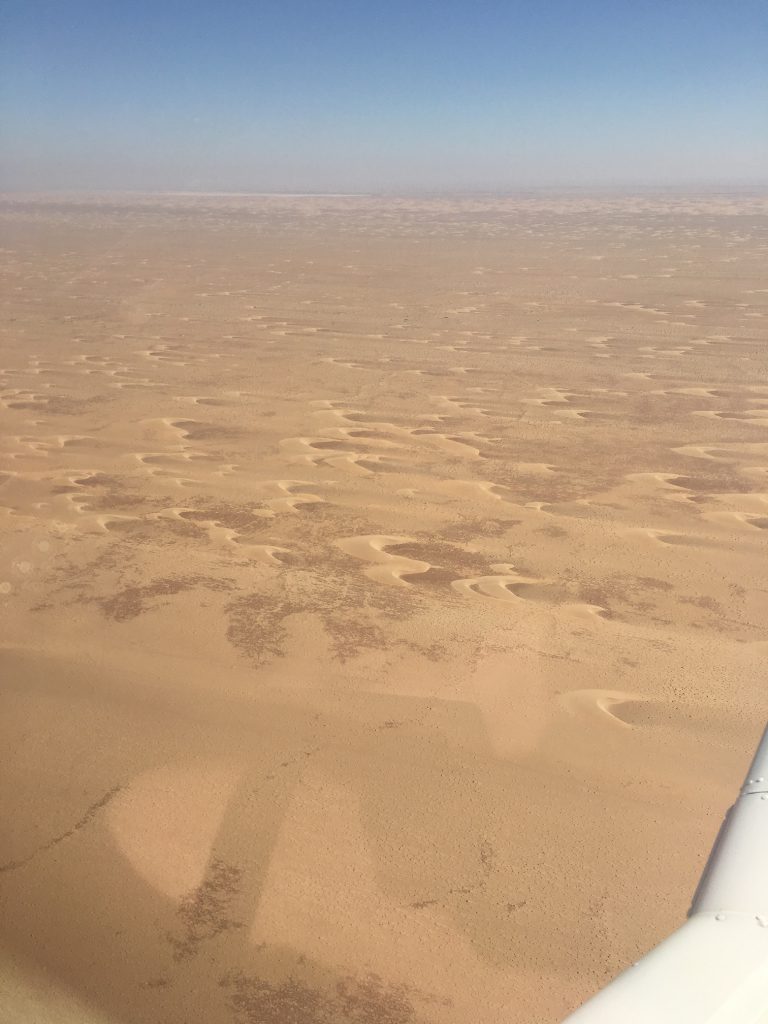 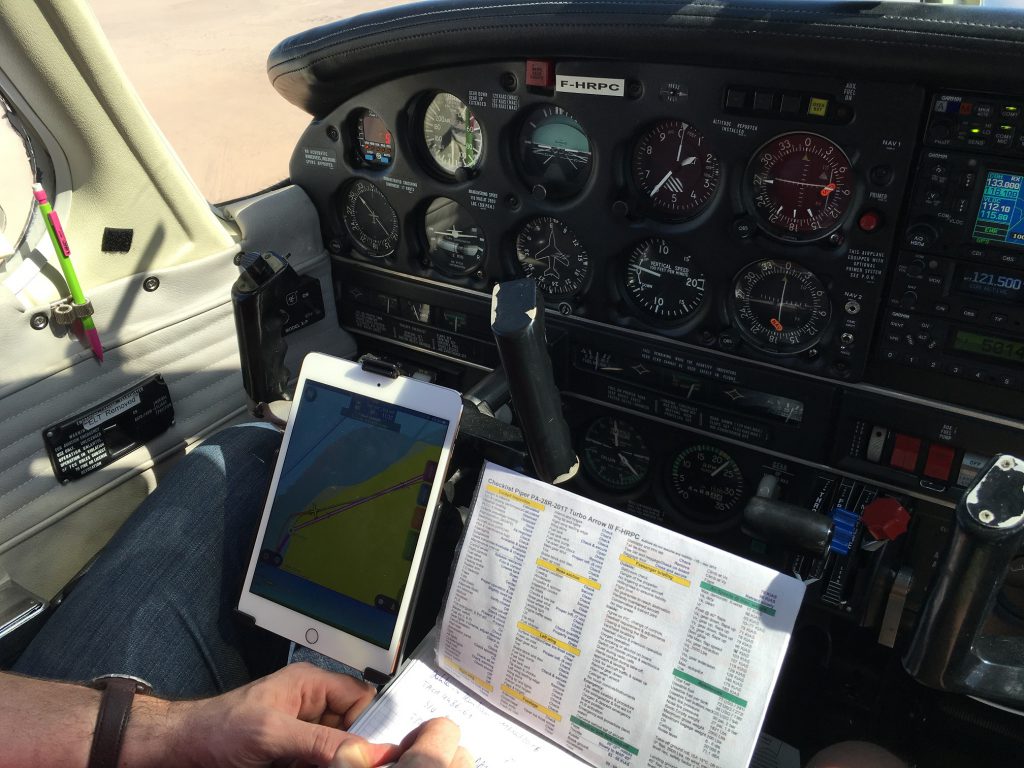 At a certain moment, we saw a large lake on our map. We decided to take a look and made a 15 NM detour to the east, inland. That lake turned out to be dry, and full of snow-white salt. It was fantastic to float over this vaste white nottingness and we had it all to ourselves. We could see the cracks of dryness in the white soil. 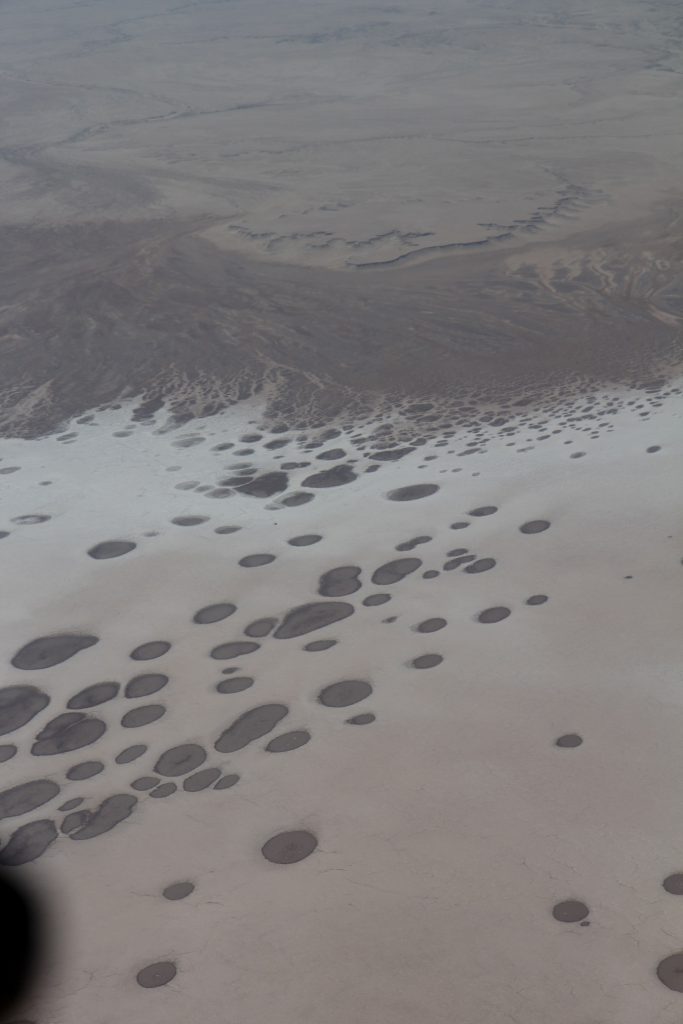 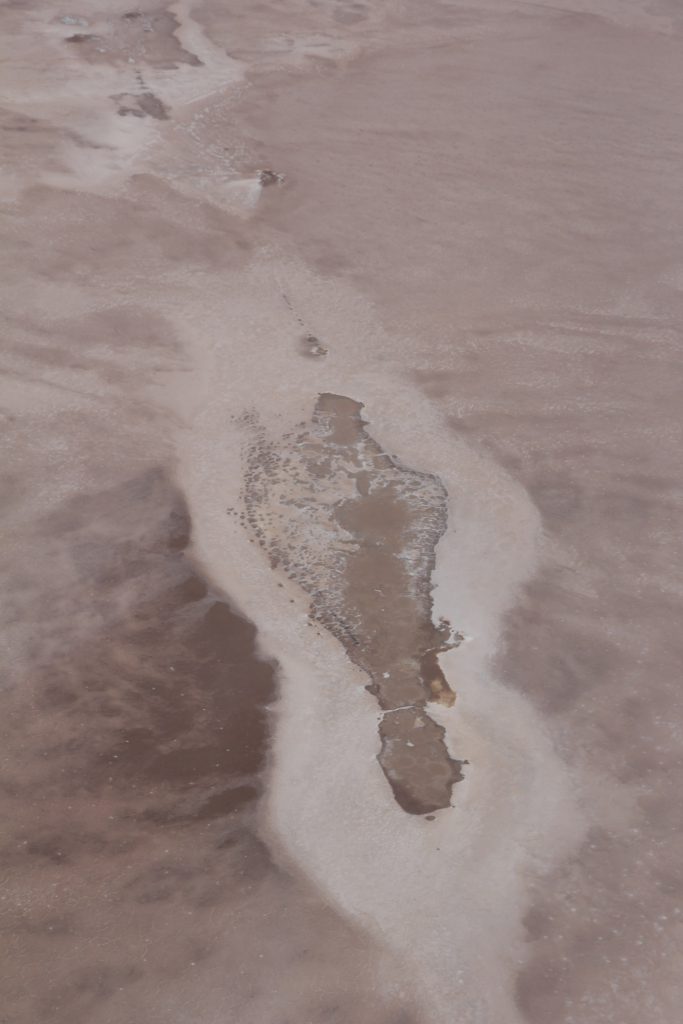 Somewhat further we crossed hundreds of small oasises: a little vegetation which must have access to some water in the dry desert. 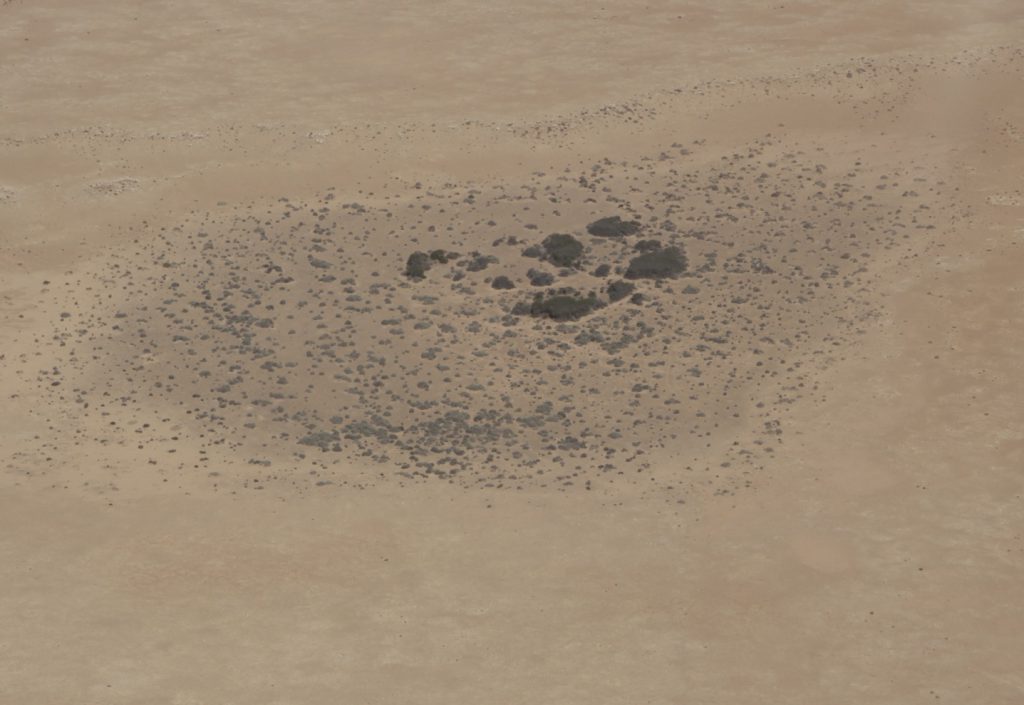 We tracked the coast again and we were again “treated” with at least five shipwrecks, laying pathetically near the coast. 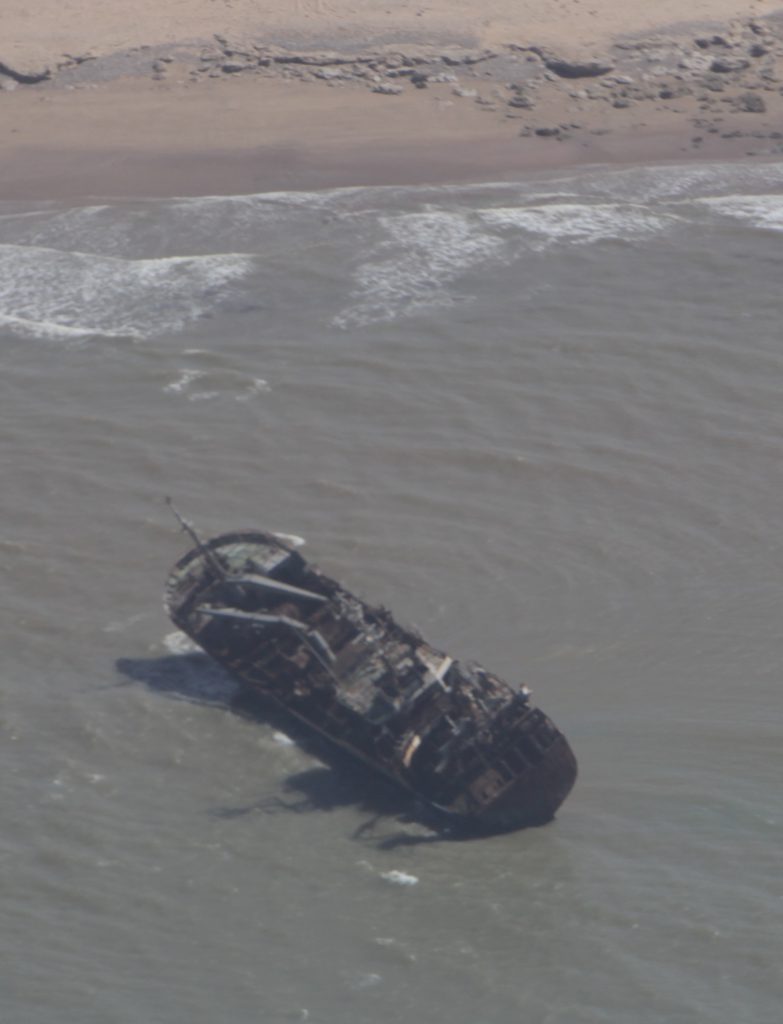 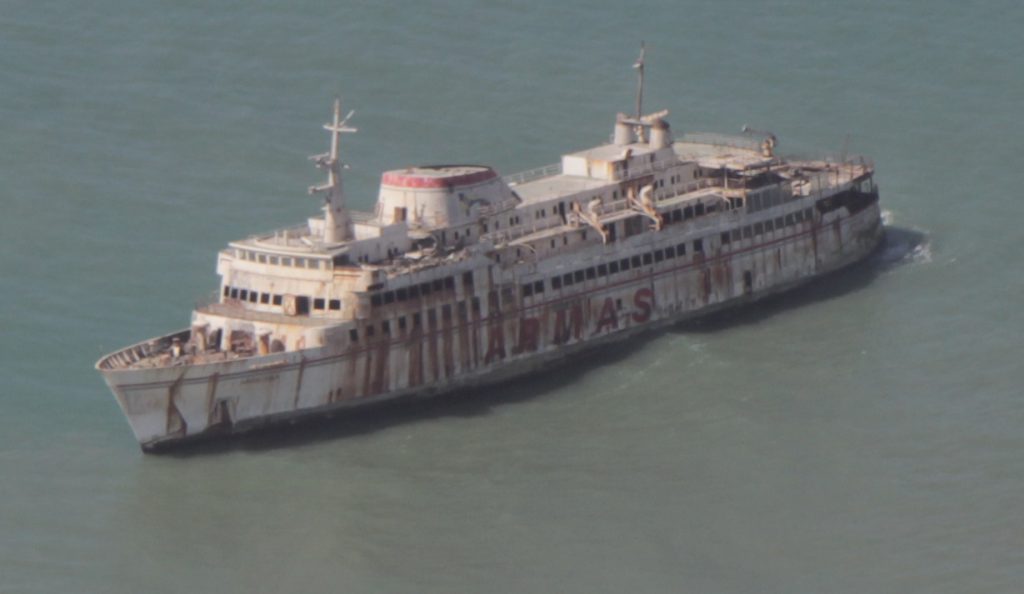 This one was a fishing boat returning to its Laayoune harbour. 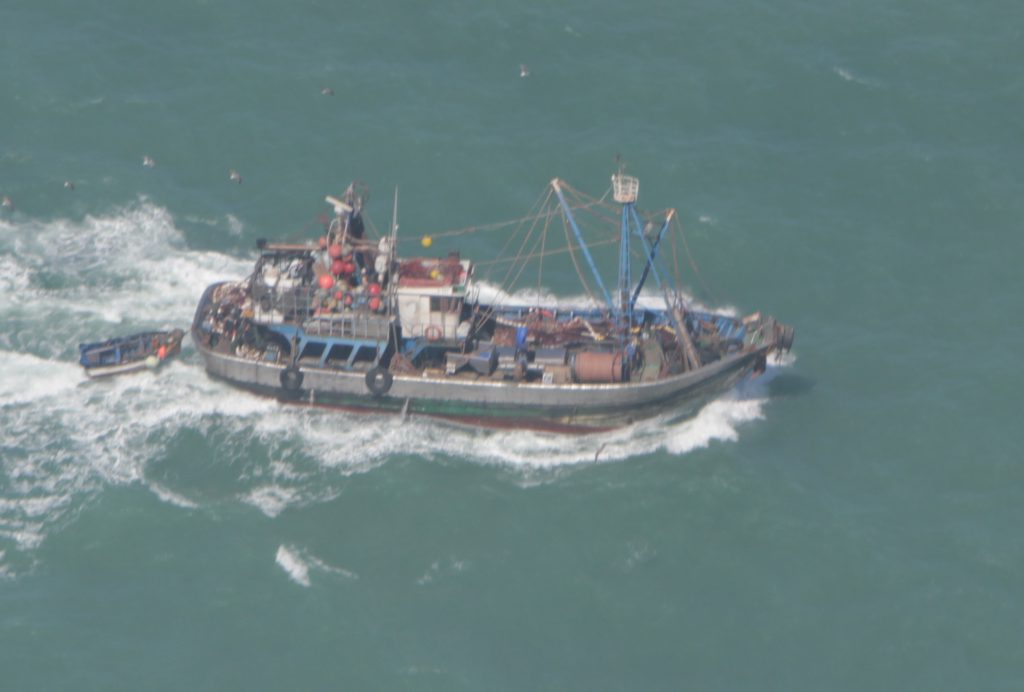 After Laayoune we set course to Cap Juby, near the city of Tarfaya. Here at Tarfaya, we paid tribute to Antoine de Saint-Exupéry, one of the famous Aéropostale pilots who was stationed here as manager. It is here, in Tarfaya, that he wrote “Le Petit Prince“. We paid tribute by doing a low approach over the sandy airstrip (left in below picture). 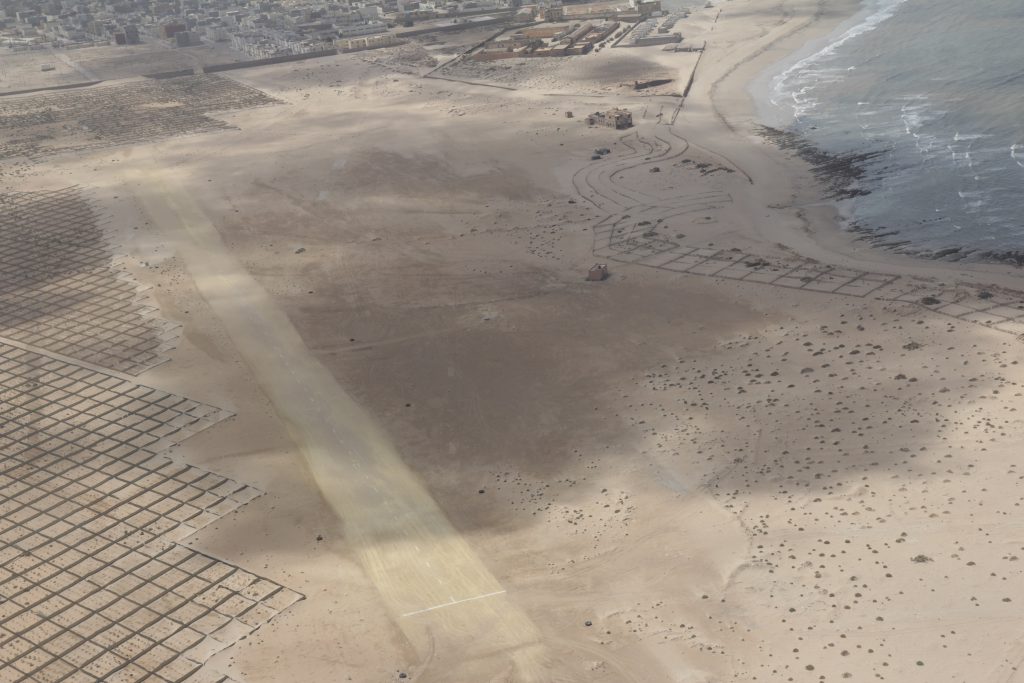 Under Papa Charlie’s wing you see the crumbled remains of his old office. 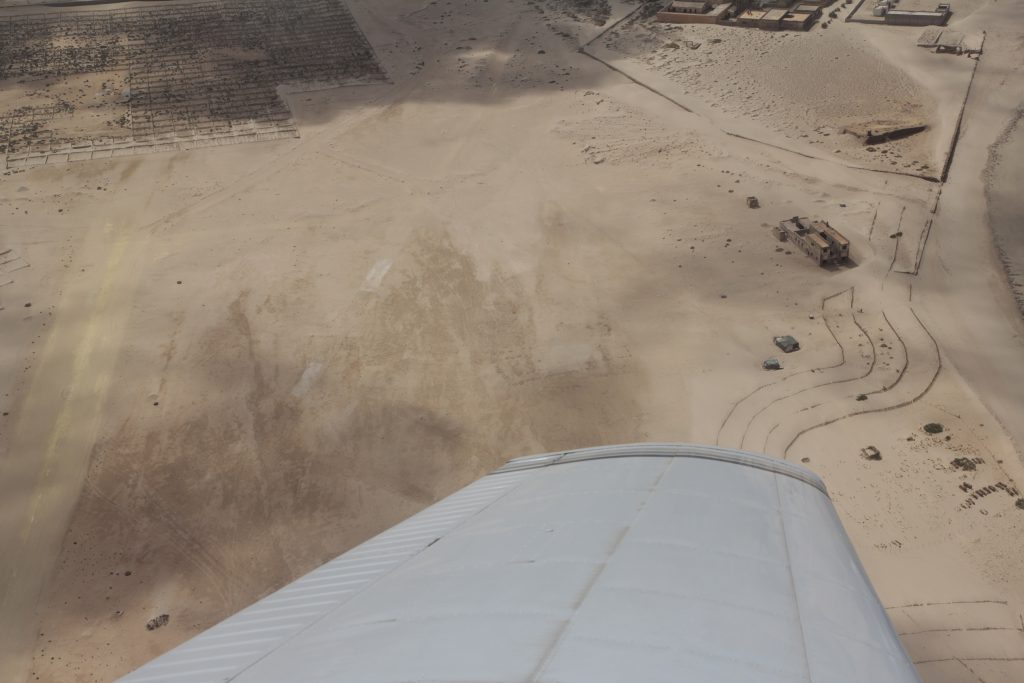 Once past Cap Juby, we turned east and contacted Tan Tan tower for a weather update. We learned that runway 03 was in use, and that the wind was blowing hard on the nose for a smooth landing. This flight had lasted 4h15m… a personal record.

Once on the ground, the police checked us and we ordered AVGAS. 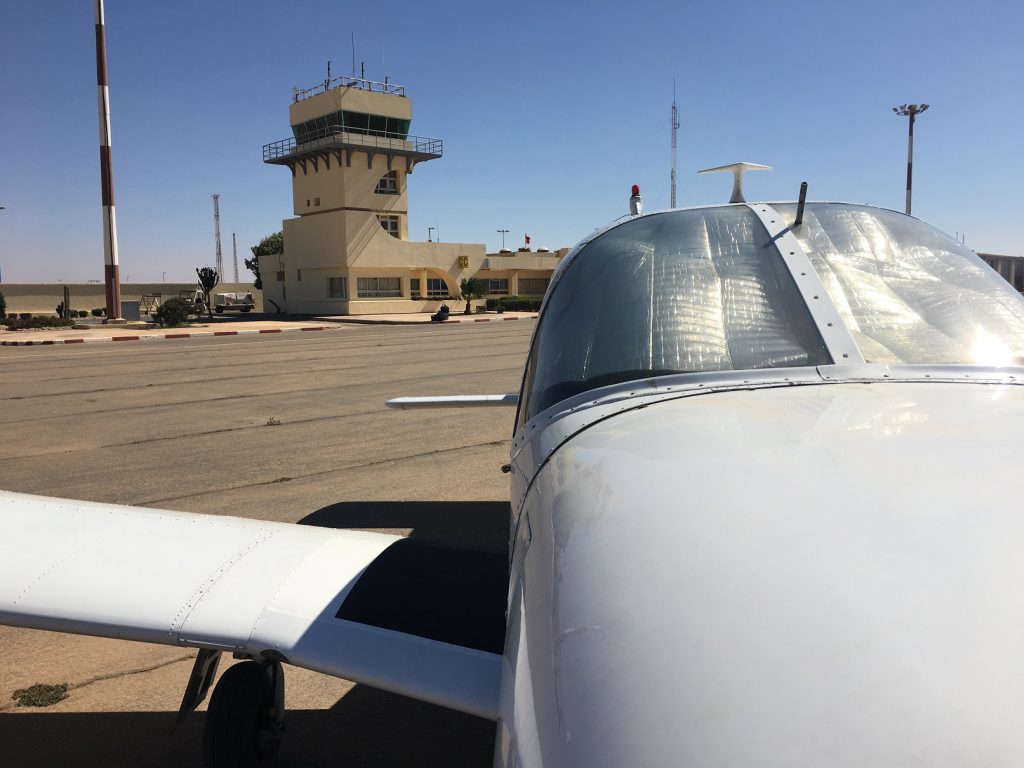 They came with a cute cart behind their car, featured two 50 gallon drums of AVGAS, a manual pump and a calibrated meter. We paid 28 dirham per liter, and filled the tanks up with 155l of fresh AVGAS for tomorrow. 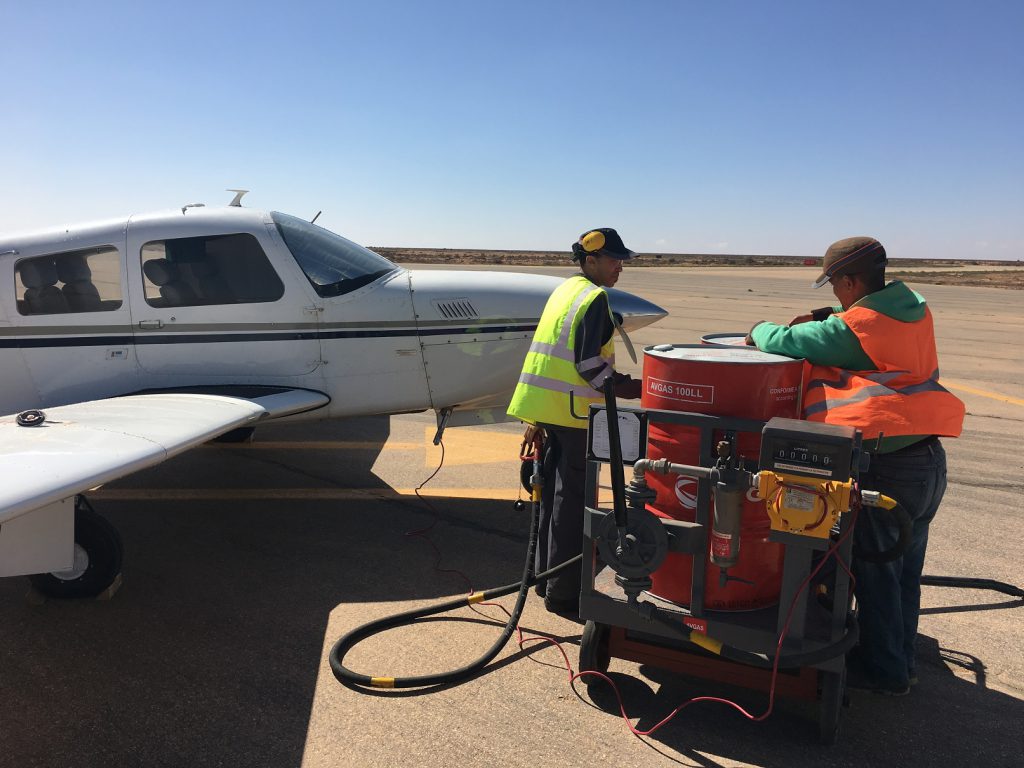 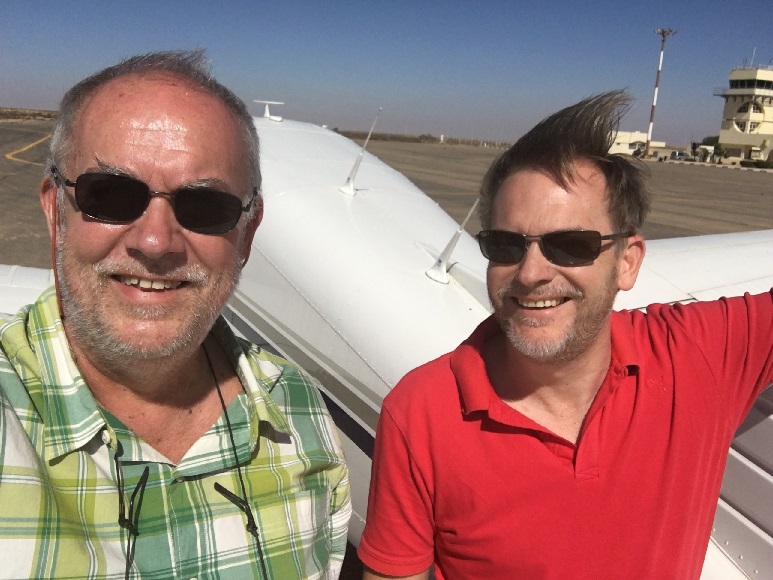 We went to bureau “C” and they helped us with finding a hotel and a taxi to go to Tan Tan Plage. Friendly people ! 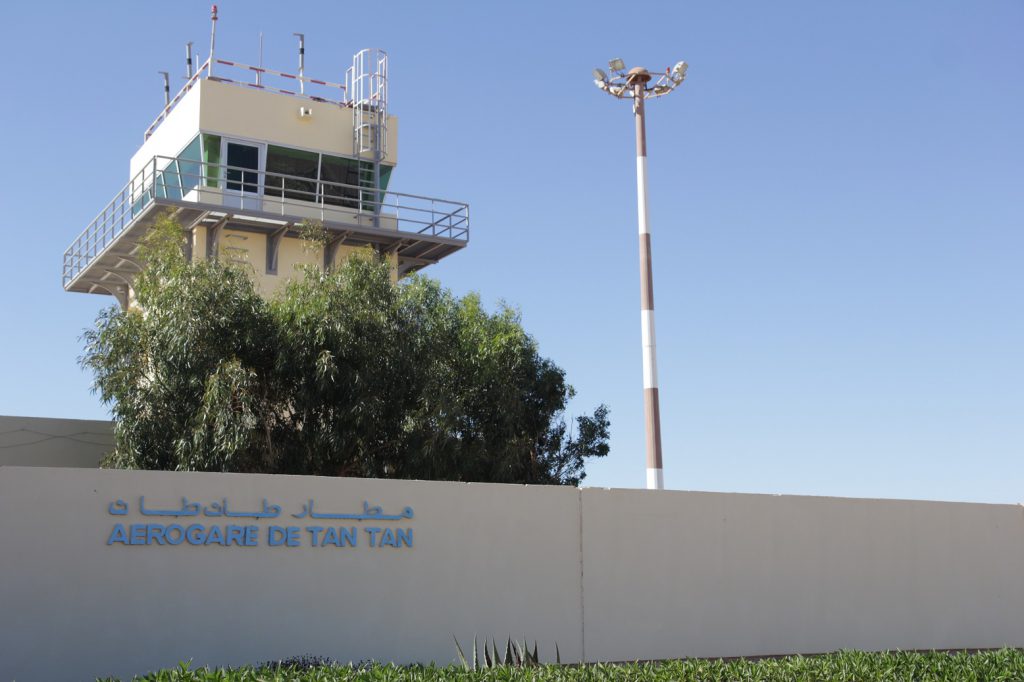 After a crazy taxi ride in a 1978 Mercedes (still drove 120 km/hr !), we checked in into the booked hotel. The original plan was to go swimming into the ocean after having overflow it for almost 1000 nautical miles, but it looked rather cold. So we decided to go for a walk and discover the village of Tan Tan Plage.

First we had a coke and come sweet cookies at a stiff old seaside hotel where we soaked in the local culture. 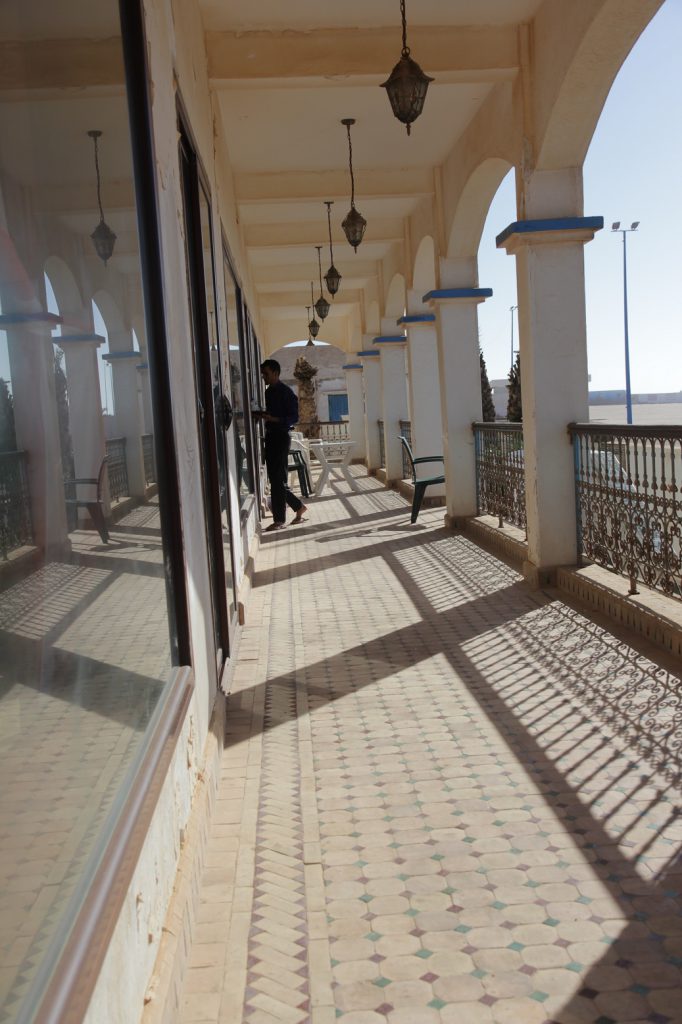 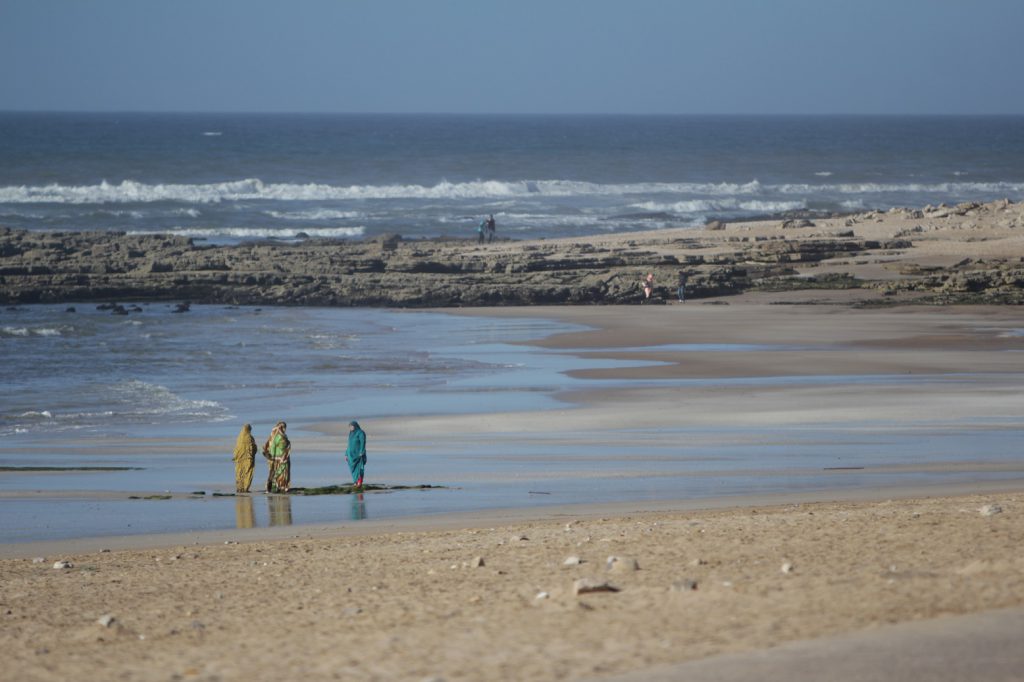 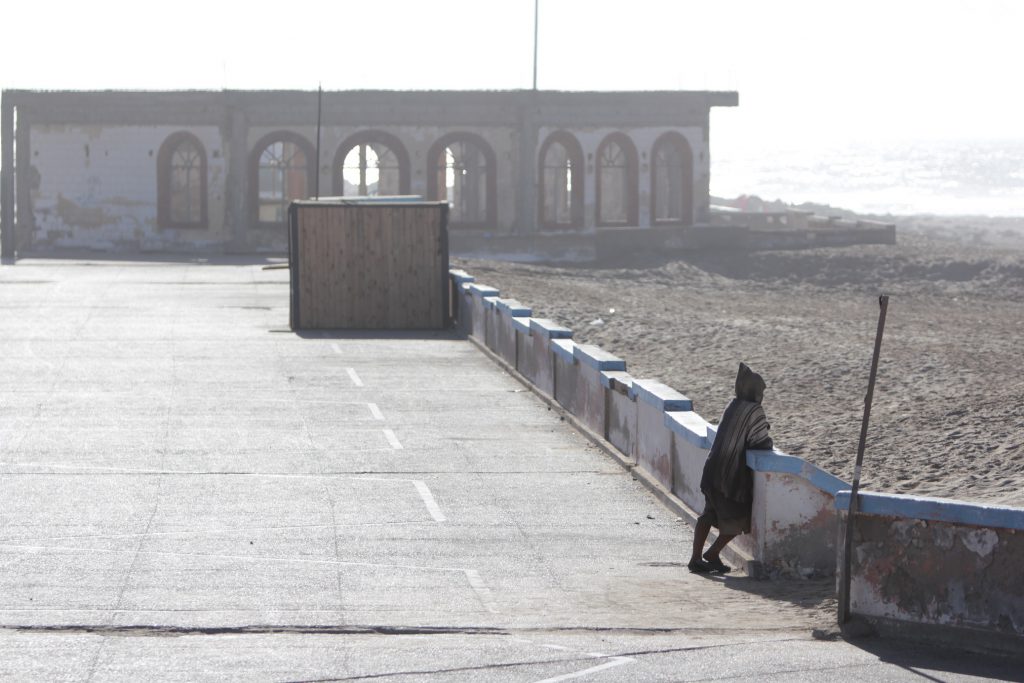 We found a little market, had some sweet mint tea and checked out the local mosque. There was a relaxed atmosfere in the air. This is clearly a sleepy village out of the tourist season. 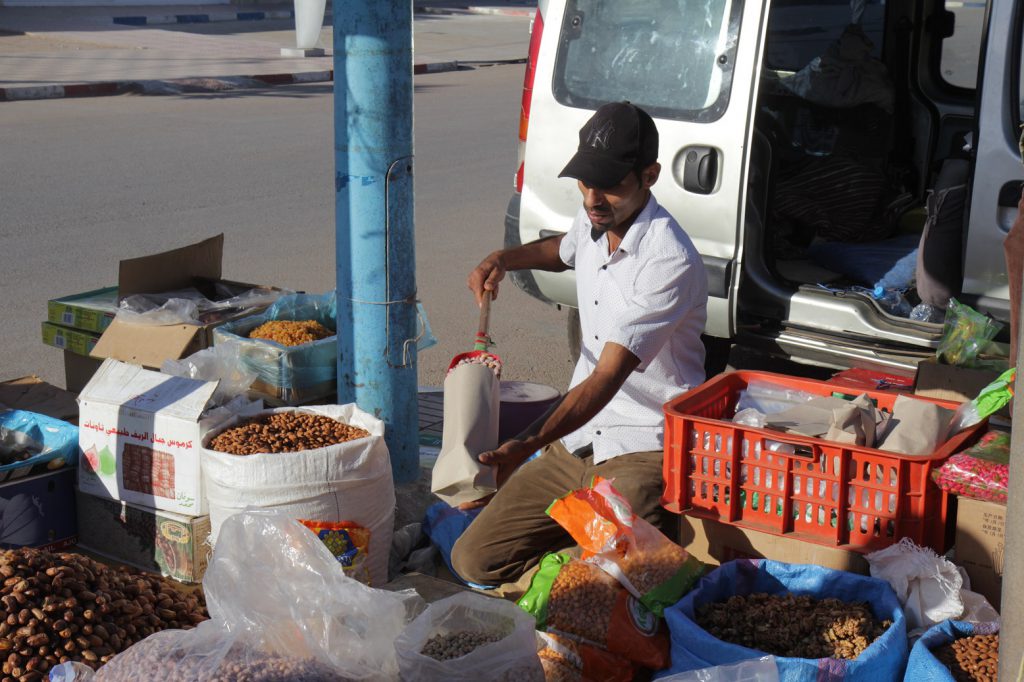 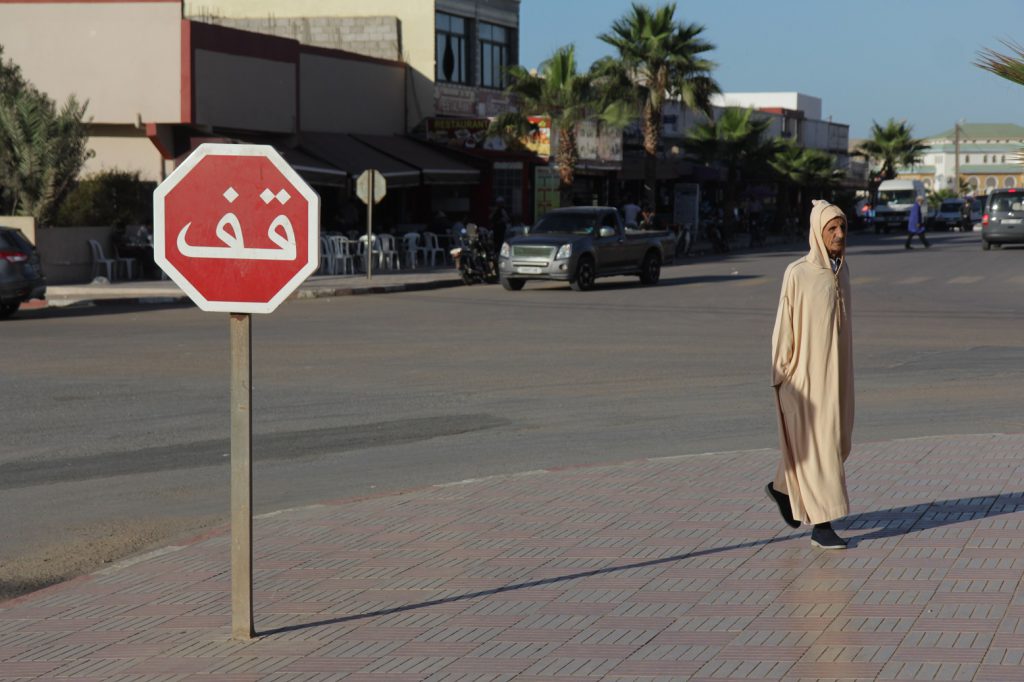 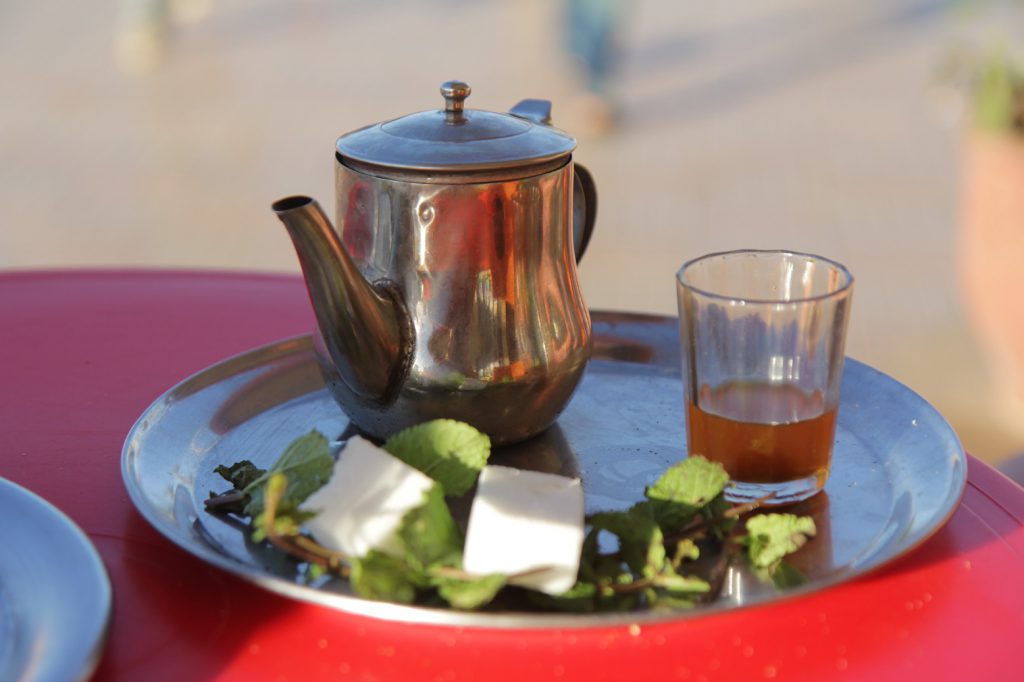 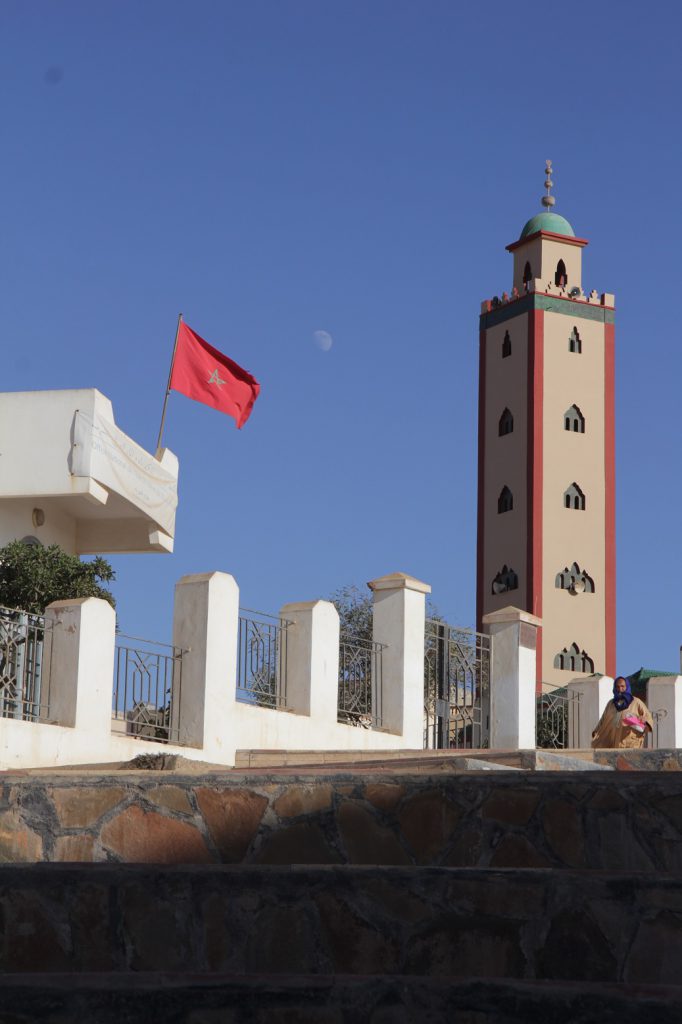 The village had lots of fancy holiday homes, all came with seaviews. 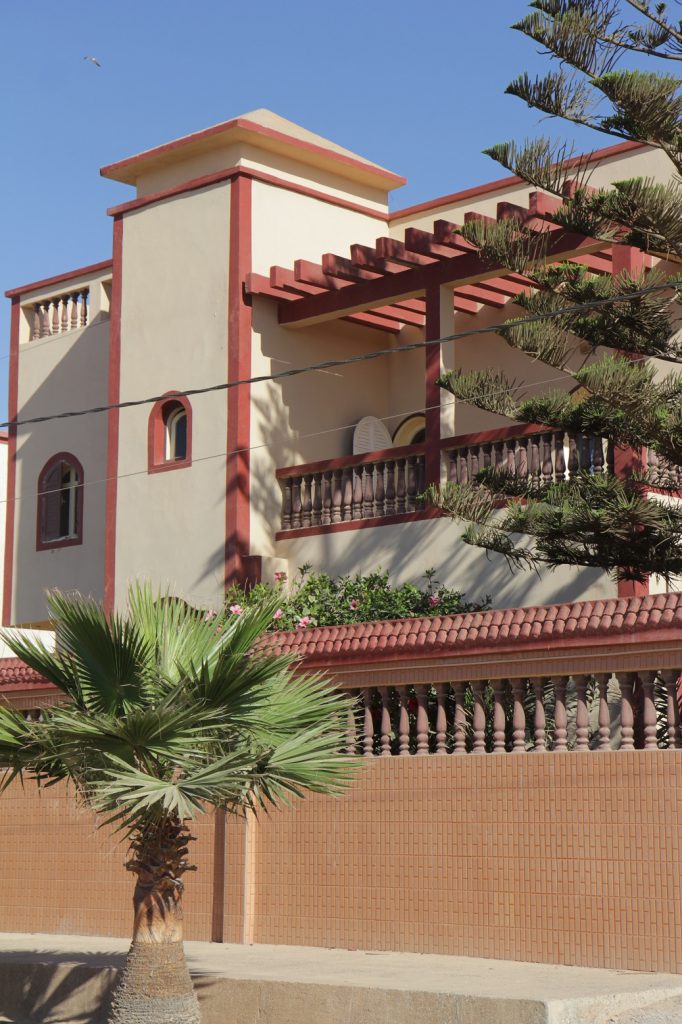 It was getting rather cold, we decided to have a meal inside: good warm local soup, followed by a main course with meat brochettes and accompanied dates and vegetables: simple and good ! 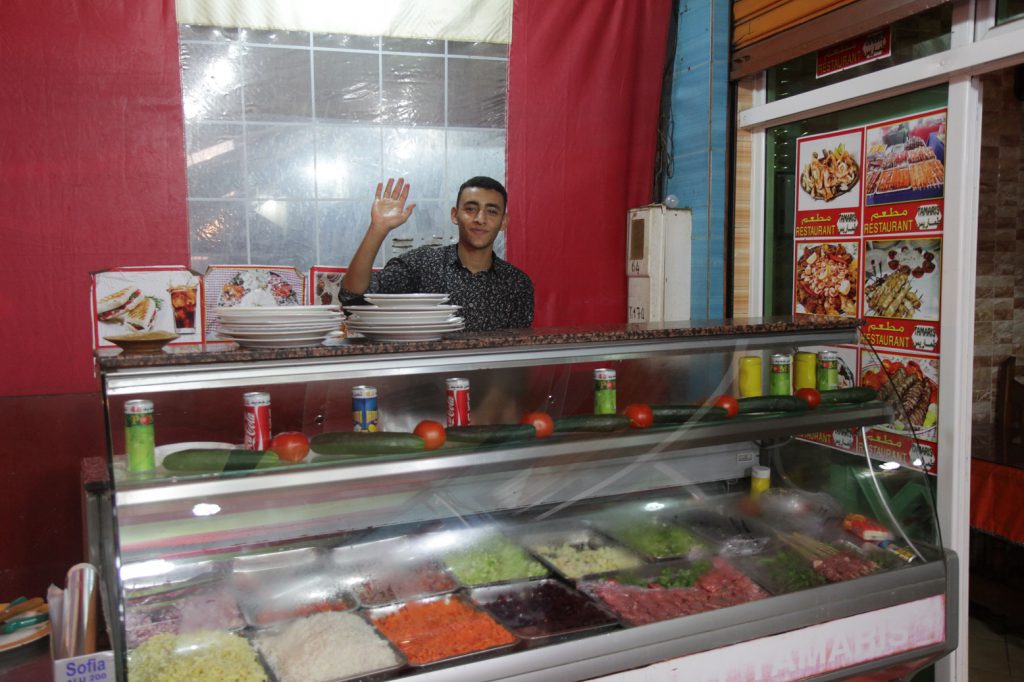 Totally satisfied, we walked back to our hotel while the sunning was setting … in the west over the ocean. 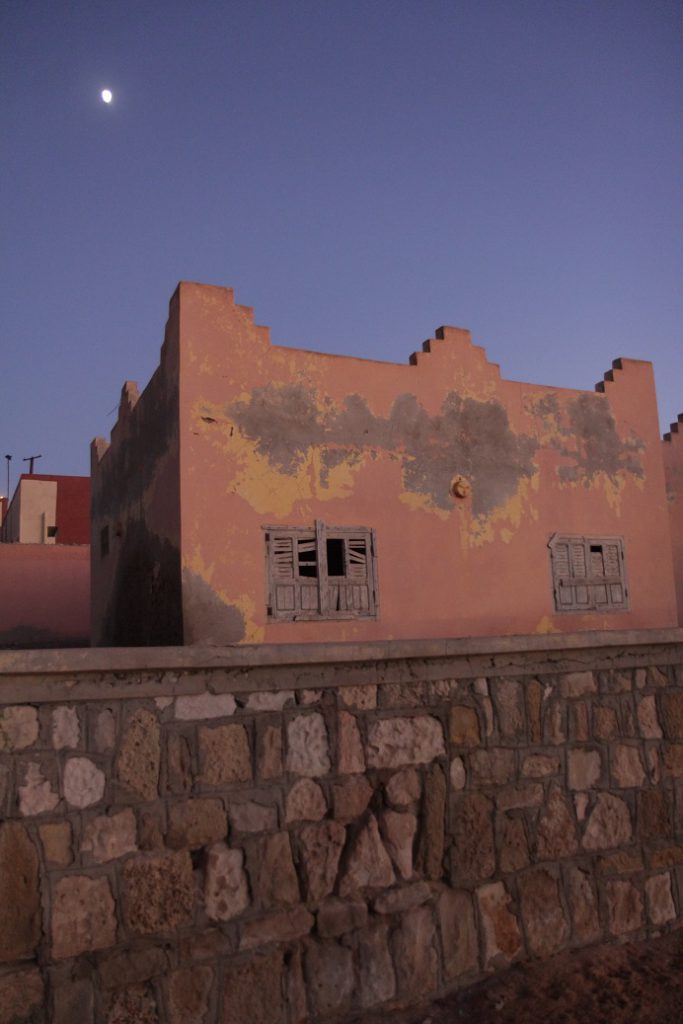 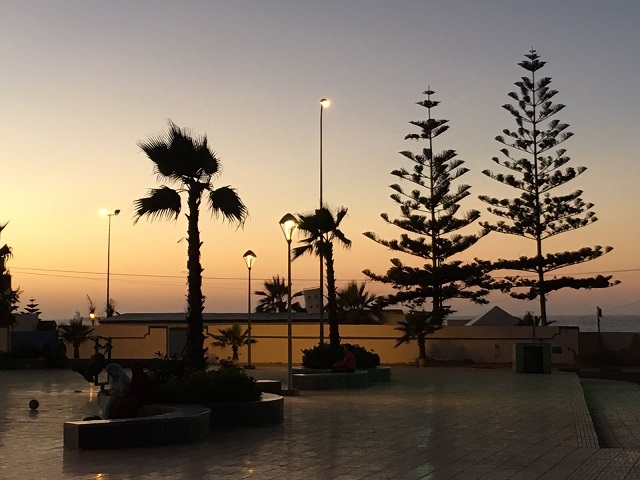 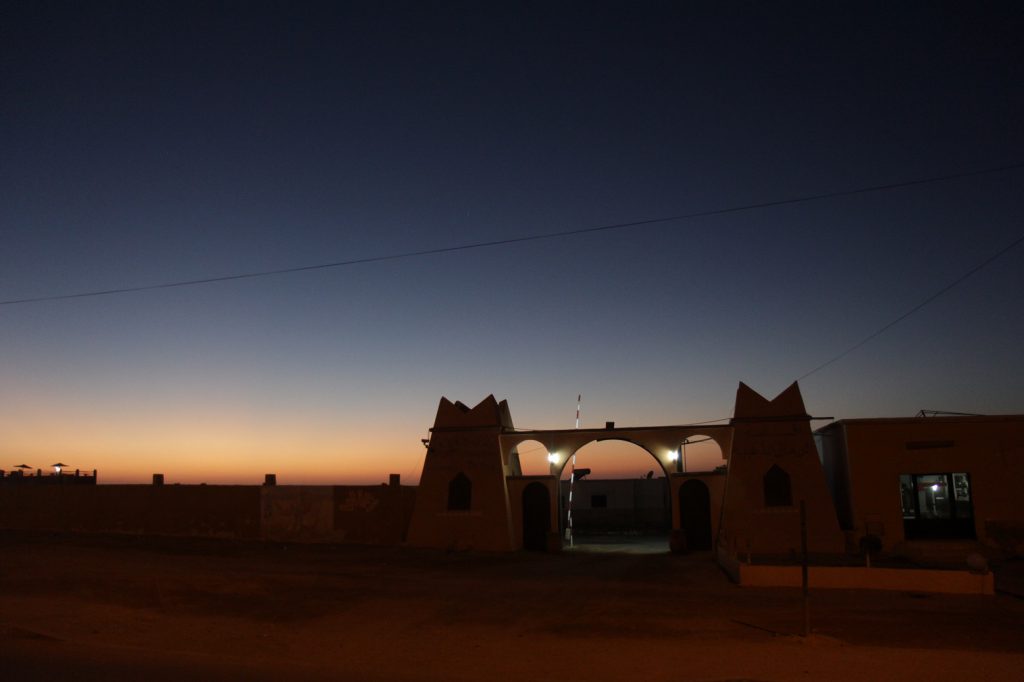 Tomorrow we fly over the Atlas mountains into Marrakech.