It was in between days filled with snow showers that I found this beautiful winter day. After too many weeks of no flying, it was itching heavily to fill this day with a Winter-Wonderland-flight (thanks for that word, MSFS). Days before it had snowed.This was the coldest day of the year The day after a snow-blizzard covered the country with 15 cm of fresh snow…

I booked the beloved Mooney, planned a flight from Lille (LFQQ) to Charleroi (EBCI) (now Brussels South 🙂 ), IFR. The flight plan was simply from SID to STAR with Chievres VOR (CIV) as interconnecting waypoint. Forth was planned at FL50 and back at FL60. Weather was simple too: severly CAVOK ! My co-pilot was my son, armed with a Nintendo and my camera.

With all this simplicity, what could go wrong? Oh man, had I underestimated this flight !!! In all honestly, I will give you all the issues that went wrong surrounding the otherwise safe flight… My intention is to share to learn and avoid similar issues. 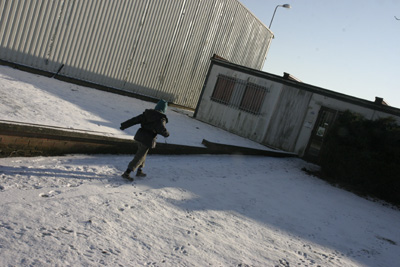 Issue #1: my security badge for Lille was not working anymore, so I found myself in front of an locked door. After a couple of minutes another pilot passed by and let me in after he had scrutinised my badge.

Everything checked and found airworthy on the aircraft, we pulled the Mooney out of the hangar. It was freezing cold, and I promised a heated cockpit to my son.

Starting up, the prop went one turn and then nothing anymore. Issue #2. Tried a couple of times more, but the thing didn’t budge more then 120° at the time. So I thought that the engine oil was tick and I needed to turn the prop to break the oil seal. Of course, I switched off the mags and the battery before touching the prop. I turned it around like 20 times, tried starting again, nothing … Then I considered that the battery might be insufficient because of the cold. But the Lady had flown 4 days ago, so it couldn’t be that bad. I considered cancelling the flight, but then I noticed one more planes on the apron having start-up problems. I talked to one of the pilots and obtained an external powerpod with a matching powerplug. Checked the POH and this Mooney digests 12V (not 24V or 28V!). The friendly pilot connected the pod, while I started up. We agreed that if that worked out, I would not shut down the engine anymore and go flying. Well, that’s what happened: the electric starter was happy alive with the external 12V, and soon the engine started. I could finally heat up the cockpit.

I obtained my clearance, and although runway 26 was active, ATC offered me runway 08 which means a shorter taxi distance and a good easterly launch towards CIV VOR. So I was recleared to the CIV 1Y SID from runway 08. Nice. Runway 02/20 was closed due to ice and snow, so I could only use it for taxi towards runway 08.

Take-off, climb and cruise towards CIV was uneventful and very pleasant over the snow covered North-French, South-Belgian landscape. My son had forgotten about the Nintendo and took lots of pictures. The heater worked full-time to keep our feet unfrozen. 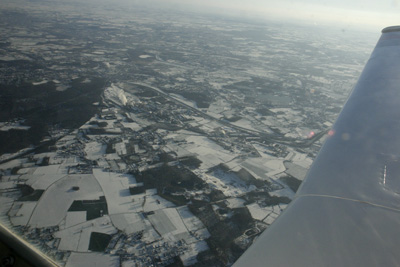 Lille Approach put us onto the frequency of Brussel Departure, and when having passed Chievres VOR, we were asked to contact Charleroi Approach. That’s when we got infected by the Irish Flu … Ryanair seems to have a monopolistic attitude towards Charleroi Airport. I was vectored well clear of any Irish bugs on a looooong downwind NORTH of the airport, while I came from the southwest… Issue #3 was this particularly resistant 737 that came out of nothing and was cleared directly down to 2000ft. This was 2000ft below my level of 4000ft, which meant that It took precedence. I lost like 15 minutes on that vector. I saw the airport of Namur (cleared of snow) … that’s how far I went … Then they vectored me back to the localiser towards runway 25, which I intercepted at the exact moment that I captured the glideslope … not a nice vector. To rub it in further, the controller warned me of wake turbulence behind the 737 … 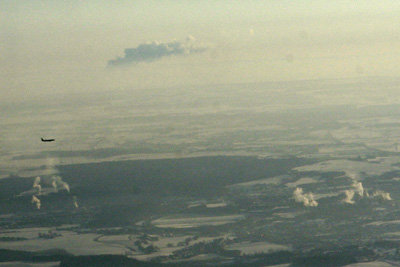 The landing was uneventful … after having passed over the cemetery which is adjacent to the new terminal on the northside of the runway. 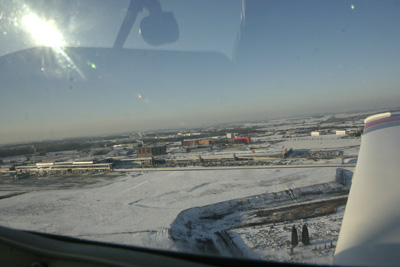 All the while, I checked if the battery was charging well, which it did, so I was assured of a full battery when starting up again – at least that ‘s what I expected… 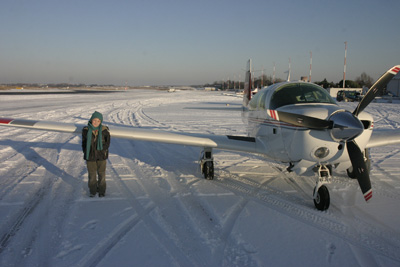 We set out to find the place to pay our landing charges. Issue #4 was that the entry was simply impossible to find and totally not indicated. Other airports have a large yellow C indicated the place to deposit your rediculously high amounts of cash, but Charleroi does in a more secretive way … The walk took like 15 minutes through snow. Son’s toes were beginning to complain of cold…

After asking 2 people, we were directed to the Bureau de Navigation, where the computer did not know my aircraft. This turned out to be very logic as the Mooney had never touched down since their new system had been installed. And before I could register, I had to provide ALL paperwork, which meant walking back and forth to the parked aircraft … through thesnow … during one of the shortest days of the year. And of course I was like 10 days out of my legal nightflying-with-passengers limit. My son is a passenger yes…

So the paperwork took care of issue #5, and the invoice will be sent – I don’t want to think of the amount yet …

We walked back and I saw another two aircraft struggling with bad or cold batteries to start up their engines. But my battery was charged and hot, yes? OK, I requested my clearance before I started up my engine as we had lost considerable time with all above issues. Having obtained my clearance, my bloody battery let me down again… Prop turned now like 60° before it stopped. A slight panic was lingering on the horizon as I didn’t want to organize the logistics of leaving the Mooney behind in a blizzard, being picked up in Charleroi by somebody less comprehensive about General Aviation, driving back to Lille to pick up my car and then home, and doing the inverse as soon as I could trust the battery again, all the while knowing that I could have avoided this mess by not having flown in between snowdays – get the picture? Issue #6 noted.

Again another friendly pilot offered help. His cable was slightly short, so we pulled the aircraft closer. Stupid-me had left the towbar behind in Lille – issue #7. And of course, these friendly people did not having the mating powerplug, so issue #8 was solved by a screwdriver, a piece of plastic, two pincers, a voltage meter and a considerable amount of ingenuity and improvisation – no luck involved, rest assured. Anyway, by then I knew the routine: I would start up and go flying while the friendly helpful pilot would unplug anything related to external power. And so it went … pfff … I was in an operative aircraft still well within legal timing to make a day landing at Lille.

I taxied to holding point S4 for an intermediate take-off. I had to hold due to an arriving Ryanair 737. 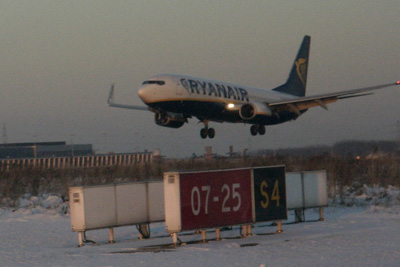 And this craft prompty decided to GO-AROUND 20m in front of me when it was like 1 m above the tarmac. Issue #8. Don’t know why it went around, but it was rather impressive to see, hear and feel the engines spool up again, making the beast shooting steeply skywards at Vx.

This promptly set off all panic triggers at Charleroi Tower. They asked like two times if the craft went around, while it was plainly visible. The pilot (Dutch accent 🙂 ) didn’t even announce it went around, it just received new vectors and a new altitude and took them without pride. 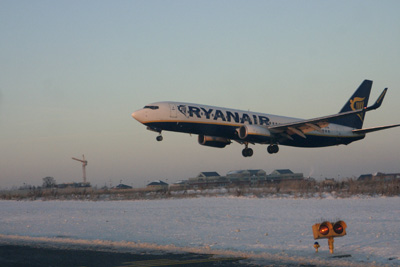 In the meanwhile, two other Irish bugs were on the ILS, and of course they got precedence. I meekly tried by saying “N201DJ is still ready for an immediate departure”, but the Tower considered me a total idiot as they told me that the aircraft of final was on a 3 mile final … this should explain enough … well it didn’t. I could have make it fully legal & safe. If this were any US airport, I would have gotten in between. Anyway, I stood there burning Euros at holding point S4 for like 10 minutes. Praise the lord for Nintendo in the meanwhile – my son couldn’t care less … and the engine was taking care of our cold feet. 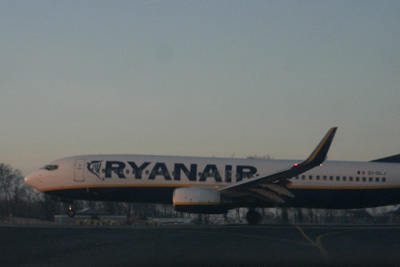 Then the Tower told me if I could see the Cessna 152 on final (he also got precedence … imagine … pff my Mooney ego was hurt badly !). I did, and I was cleared to line-up behind the Cessna behind and I had to prepare for a very immediate take-off. Of course, I was fully prepared for 10 minutes already and had checked everything like 5 times. I lined up behind the Cessna and took off very immediately.

On the Tower and Approach frequency, the frenzy continued. All VFR GA aircraft were firmly told to stay outside controlled airspace as if an emergency was occuring. Another IFR flight was told to expect a prolonged holding … enfin the Ryanair panic was complete. They got full priority. Why? Because one of theirs did a go-around. Anyway … probably a good decision of the pilot and well executed.

In the meanwhile while flying back to CIV, issue #9 unfolded. I saw it became very dark around me and I had to put the cockpit lighting on, so I recalculated if I would get back on the ground in Lille in the legal daytime-flying limit, and yes I would, but why was it getting so dark? Then I found out I was still wearing my sunglasses for the take-off against the sun. Took them off, the world got lighter and any tension in my body disappeared.

Finally Issue #10 showed itself with a bad radio reception. Worst case it could mean a alternator / battery problem again, but after some fault checking (taking some loads away, checking fuses, changing radios), I found the problem to be related to the connection with my headset, a problem I had before on this craft, and solved through some wiggling and turning of the connector.

I captured the Lille localiser 13 NM out and landed nicely, all the while trying to keep directional control on the, in the meanwhile, more slippery refrozen runway. 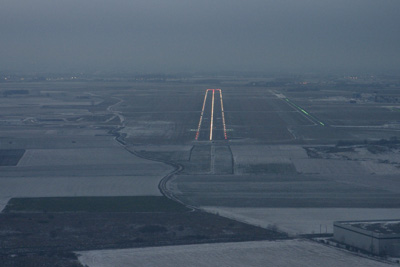 Despite all the above mentioned issues, none of them caused any safety issue, but I can easily imagine that any smaller additional issue could create a more risky situation. Winter flying is different. What they write in the magazine is true! Battery problems, slippery runways, nervous pilots and controllers, differently looking grounds, potential icing make flying more challenging, but the rewards are a beautiful landscape and a more performant engine … if you can get it started up … twice …