I traveled to the Seattle, Washington, area quite a lot in 2016 and I was always looking with envy to the GA airplanes with two white floats, flying overhead. In my mind I had decided already to do some water-flying, but I had to plan and to wait for the right moment.

First step was to find a training provider in the Seattle area. The first choice over there is Kenmore Air. I visited them and asked some info on what floatplanes and water-flying entails. They advised me to read a couple of books, and the best book on the subject is actually from the FAA themselves: FAA-H-8083-23 “SEAPLANE, SKIPLANE, and FLOAT/SKI EQUIPPED HELICOPTER OPERATIONS HANDBOOK”.

I read all those books, and when I had a weekend free in Seattle, I contacted Kenmore Air again to do a couple of hours of practice … only to find out that they didn’t have a plane available because of maintenance. So I set out to look for another solution. Via the good old internet, I found Seaplane Scenics, a small flight school run by James who enthusiastically booked the floatplane and himself as the instructor for me. 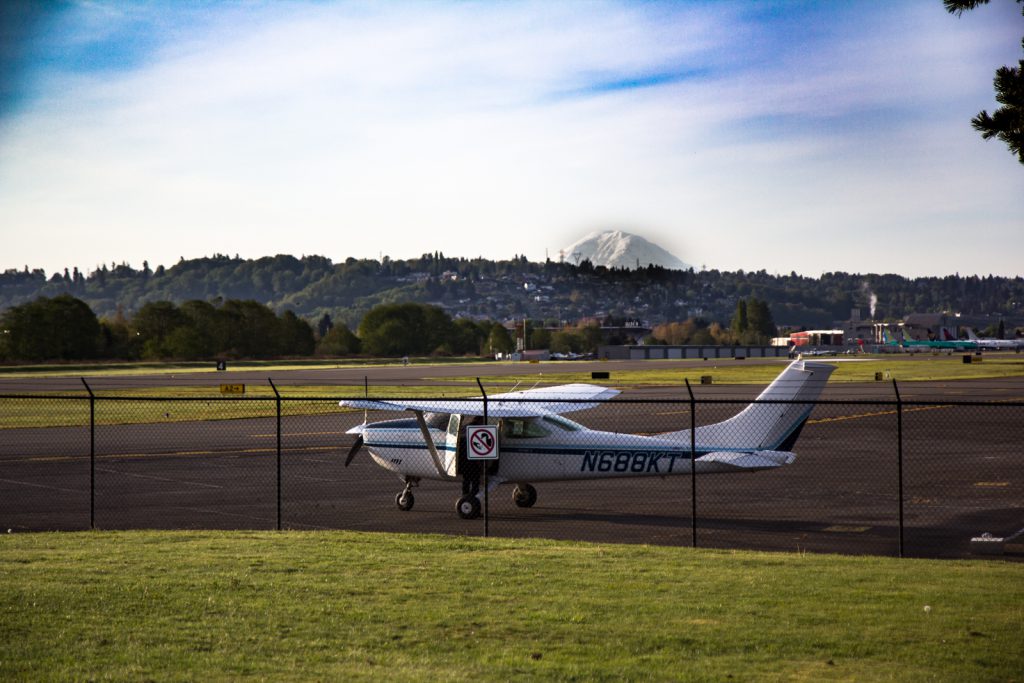 We met at Renton Airport. In Renton, southeast of Seattle, Boeing has its large 737 assembly plant. So I was going to learn to fly on water in the birthplace of the venerable Boeing 737. The runway of Renton Airport just dips with its north end into Lake Washington, and that’s where there is a small quay where the floatplanes are moored: at the “Wiley Post Seaplane Base”. 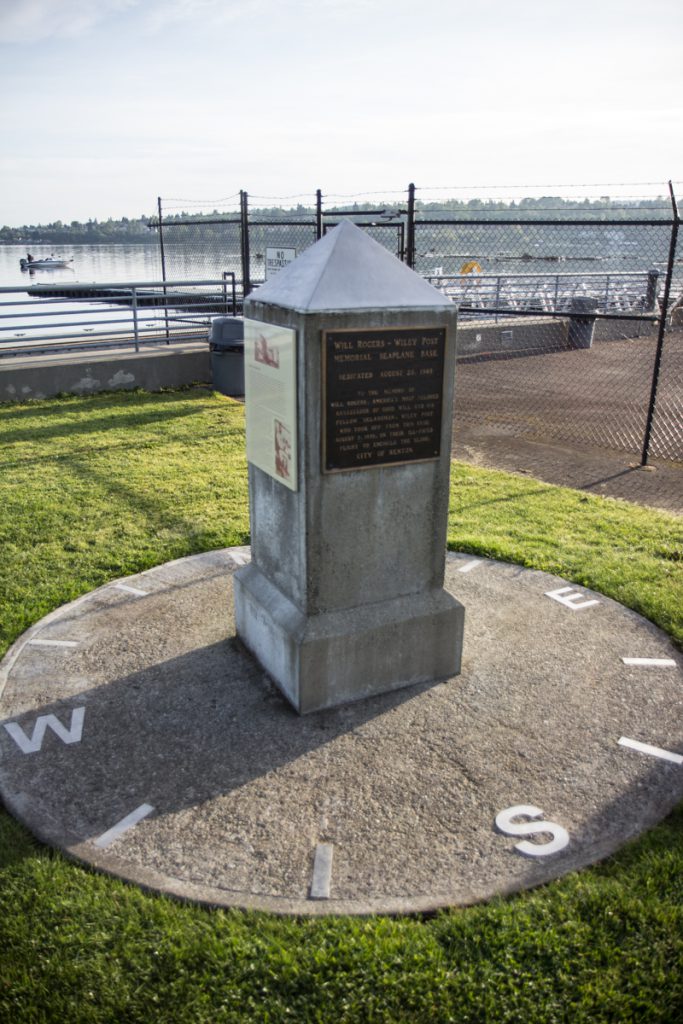 James drove a special contraption: an inverted truck mounted on a hydraulic pinch to drive seaplanes around and put them to water. Very impressive and super-handy ! 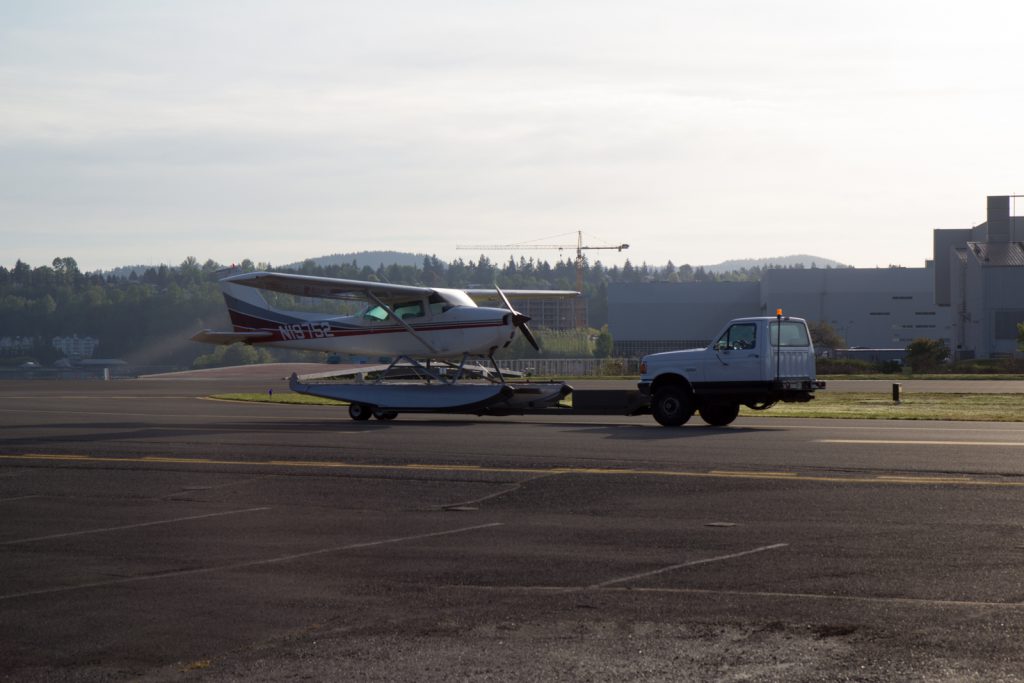 He put the Cessna 172 N19752 on floats onto the water: the adventure could really start !

First I learned how to navigate the floatplane on and around the dock. There are short ropes on various places on the wings which facilitate the turning and docking with your hands. He taught me how to pump the floats (to remove excess water), how to do a preflight with the airplane on the water … all was very different from doing that on tarmac. It was learning an entire new skill! 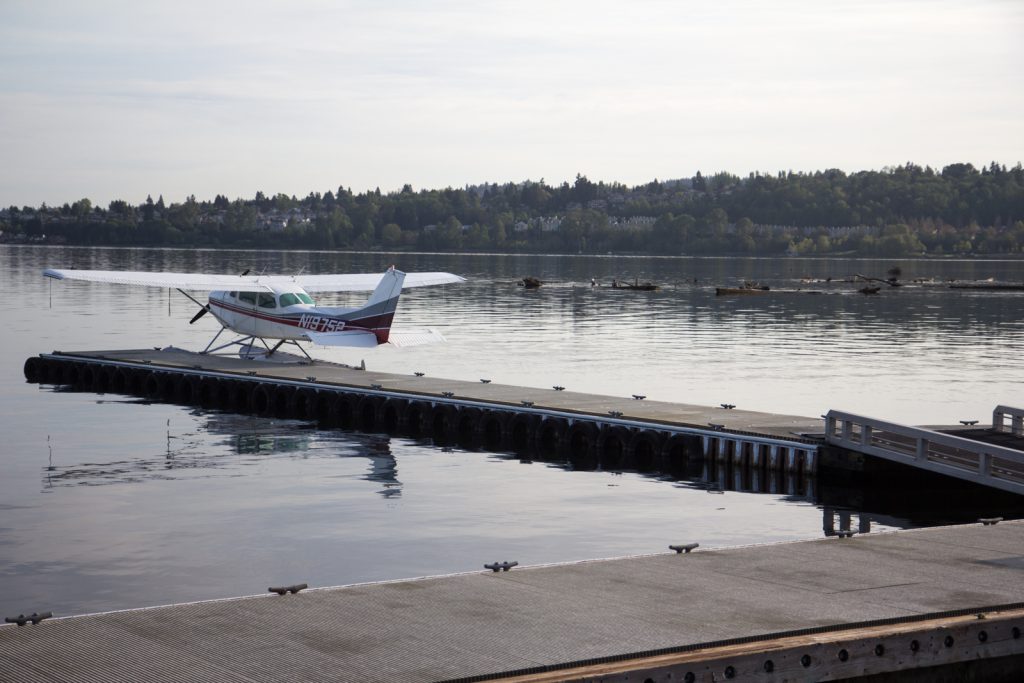 When I mastered that part, he briefed me how to start the airplane and how to taxi … on the dock. The problem is that once you push the airplane and jump in, you are committed to start ànd to taxi because there are no brakes on a floatplane, and its only engine is thé engine. Without using the engine, it’s just a floating thing and paddling is your only hope. 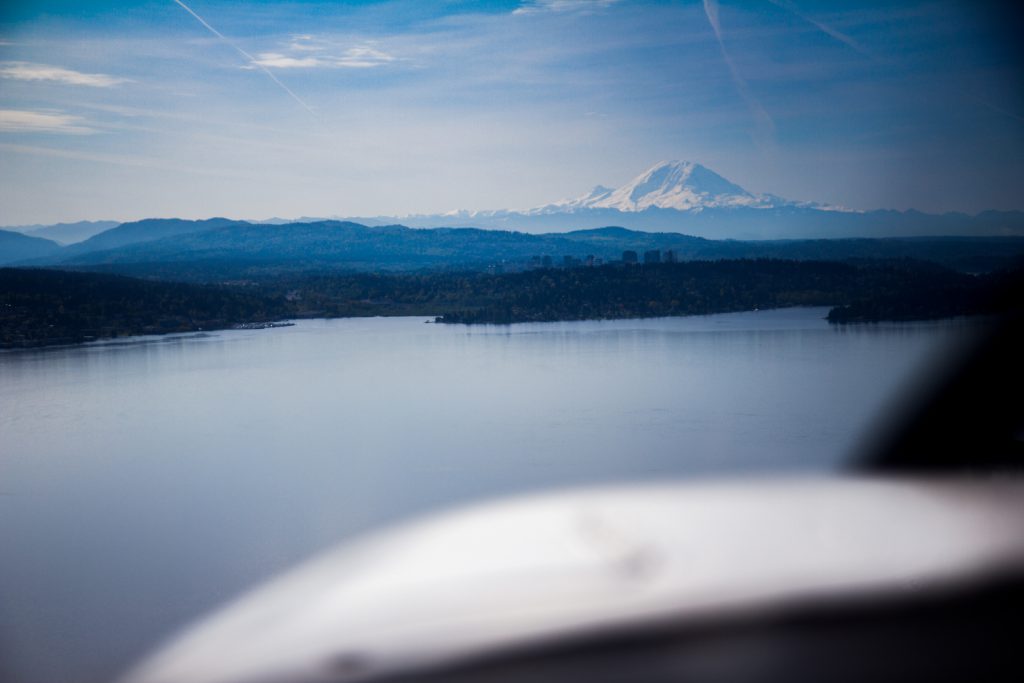 So I prepped the cockpit so I just had to jump in, crank the engine and start: all other preflight items had to be done on the dock. There we go! I was taxiing northbound and contacted Renton Tower to obtain permission to depart northwestbound on Lake Washington, with Mount Rainier in your back.

Run-up checks were done quickly while taxiing over the lake because … no brakes. Then I lifted the water-rudders and put full power. Hold back the yoke, and once enough speed is reached, you relax it a little to get the airplane on the step so it dynamically floats through the water. At that moment, you have to sense the optimal position of the elevator so to obtain the least-drag position through water … and once you find that, three seconds later you are airborne! 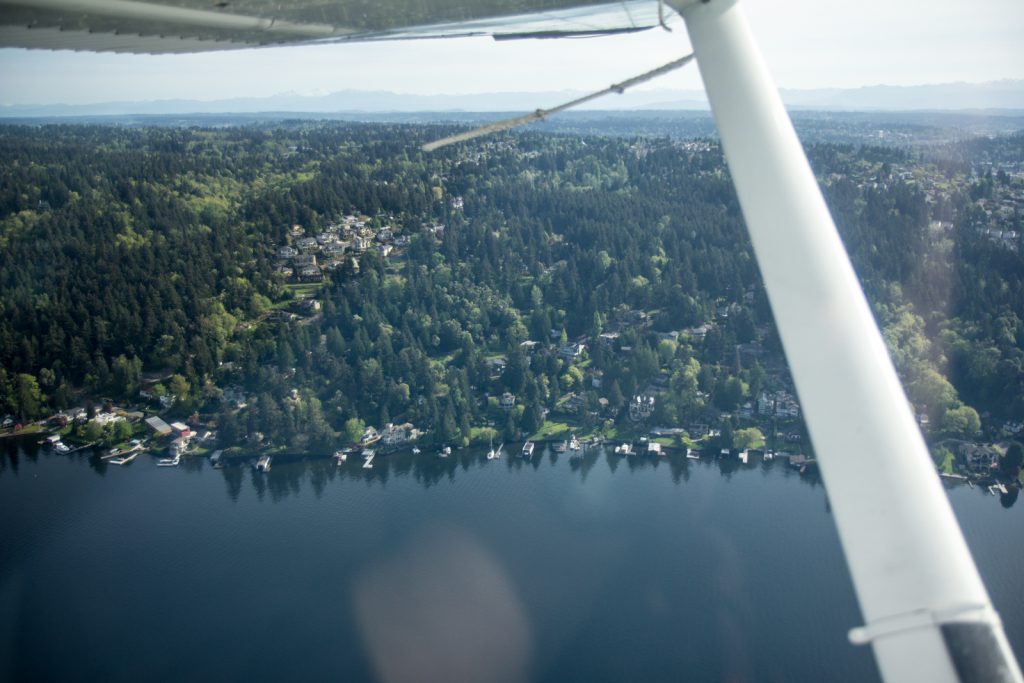 Once airborne, a floatplane behaves very similar to a land plane, just a tad heavier in taking a turn. The scenery around Lake Washington is just fantastic: big houses with piers in a lush green setting… while the lake was all mine !

We cruised northbound over Lake Washington and James told me to aim in between the two bridges to try my first water landing. I should add that there was absolutely no wind … a perfectly calm Saturday morning. However, no wind means a glassy appearance of the water to land on… and that means that you have to employ a special landing technique. As the glassy water provides no means to judge the altitude above the surface properly, you have to approach as if you will touchdown any moment onto the water. So you put yourself into the flare attitude (nose slightly high) from estimated 200 ft above the water, with a little engine power, and you sink at about 100-150 ft/min. Then you sink and sink and sink until the touchdown on the water surprises you. Once on the water, you pull back the yoke completely until the plane is still on the water: that happens very fast as that water provides an enormous drag onto the floats.

The you can lower the water rudders again and with a little engine power that is left in idle, you have become a lonely boat onto the lake… a fantastic feeling … like the lake is totally yours.

James broke the magic quickly by briefing another take-off, and plenty of water landings on the other side of the second bridge. 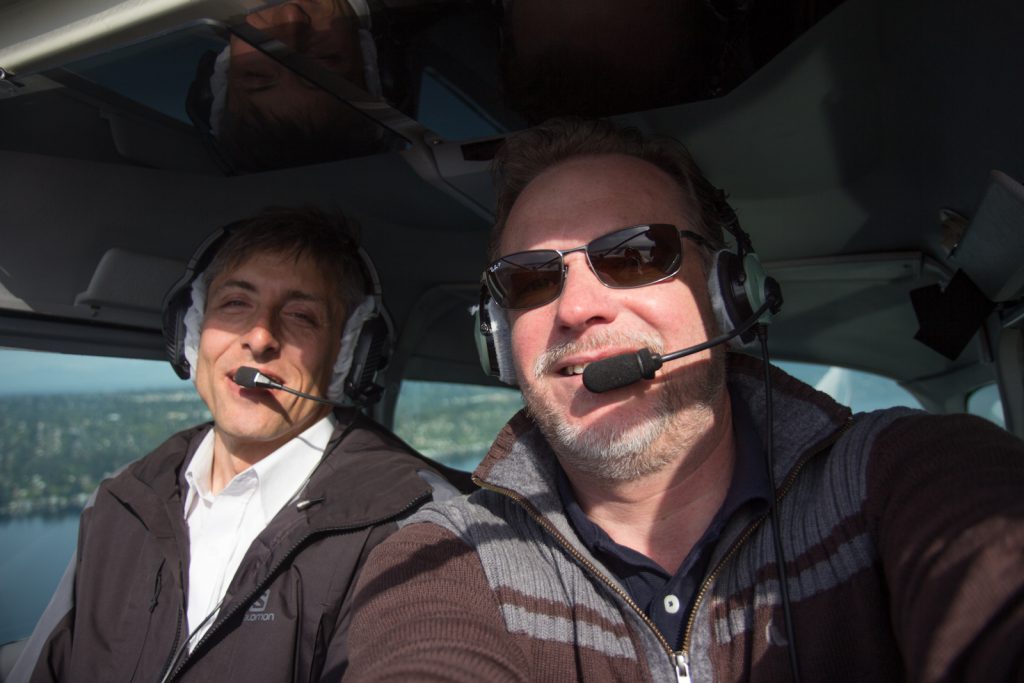 He also taught me how to make turns on the water on the step: a high-yaw maneuver but stable on the water.

Very quickly, it was time to turn southbound again. We called Renton Tower again for a water approach. The landing was as practiced, however, the most complex maneuver still had to come: the docking !

For docking, you basically have to mentally calculate the path of the airplane through the water towards the dock, so it arrives with just enough energy. You cut the engine in time so not to have a turning prop while docking. And when you are near the dock, you have to jump out of the plane onto the dock without falling into the water!

With the help of James, who called the right moments, it worked out fine … mainly because there was no wind ! We docked and while we were tying up the plane, a brand new 737 taxied past, showing a hint of Ryanair livery on its tail. 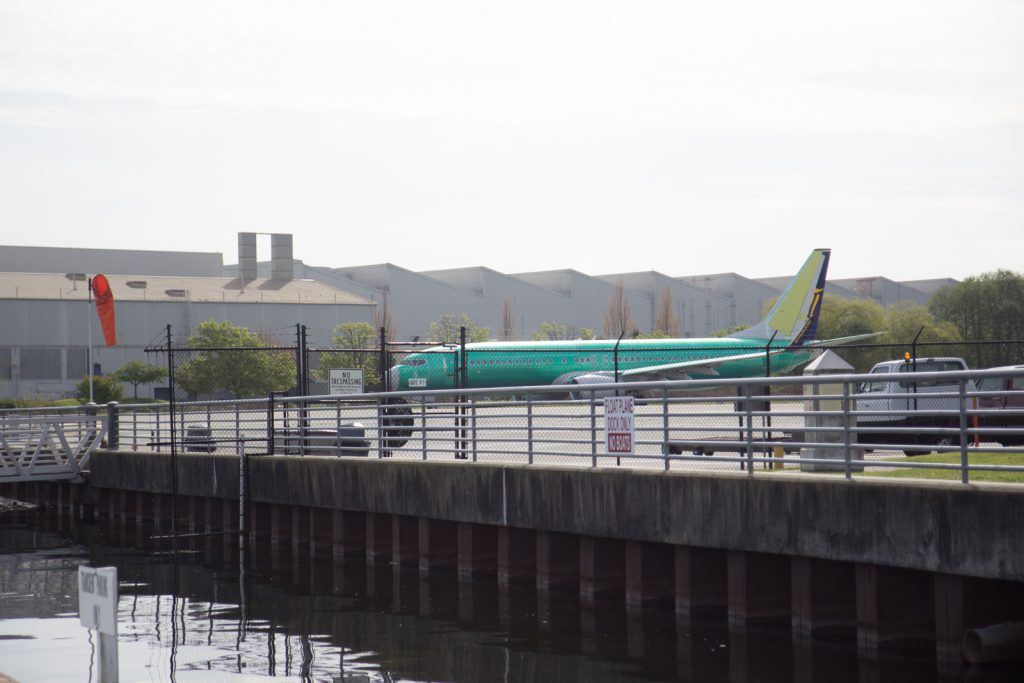 That first day of waterflying went great ! Tomorrow another day of practise … with far more wind ! 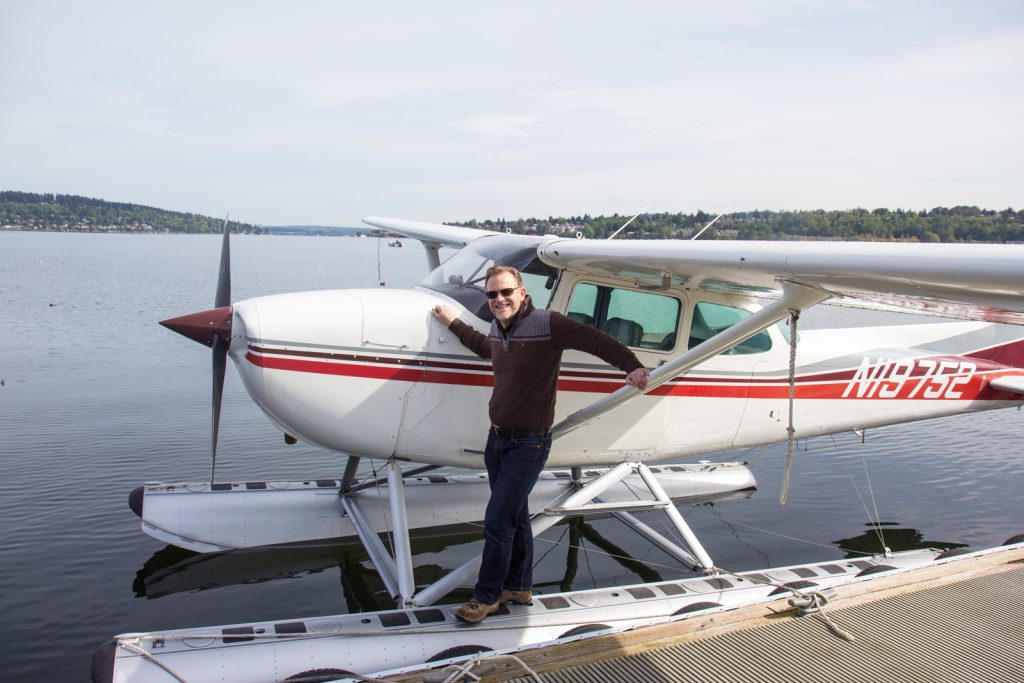 The next day, James taught me how to undock with wind. That worked out fine, and the wind created enough waves on the water surface to avoid glassy circumstances: landings would be more easy, at least if you make them nicely into the wind !

We flew past downtown Seattle over Lake Washington. 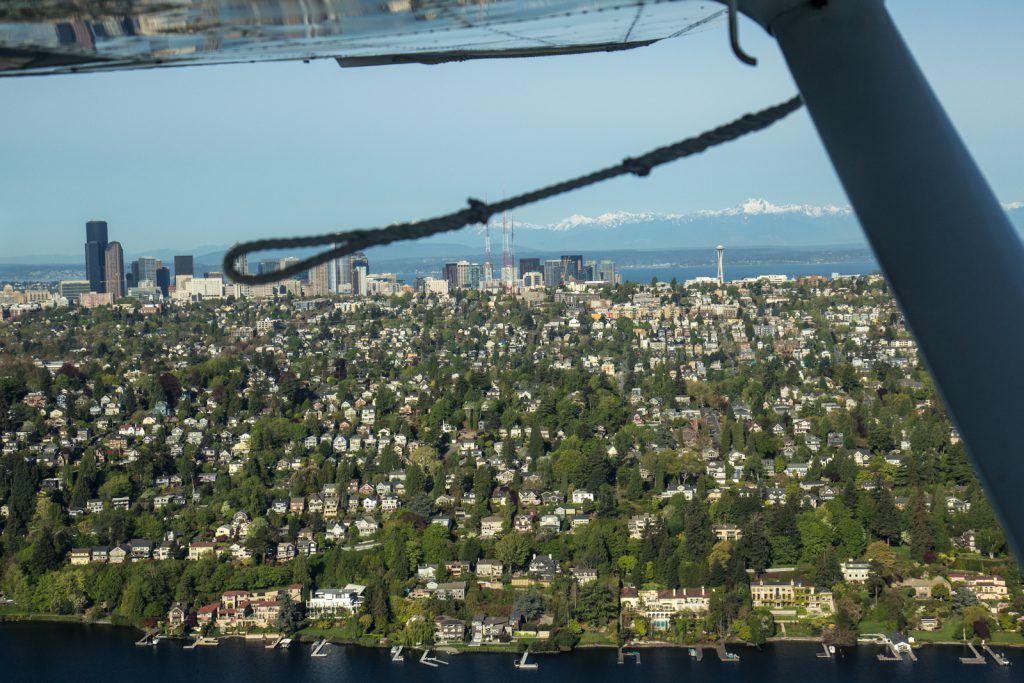 Normal landings and takeoffs into the wind are easy. It became hard when James taught me to do crosswind landings on water ! Basically, the water waves passes under you at an angle and your view is totally screwed up. You also land onto one float in a crossed way … weird just weird.

We trained a couple of these, and then flew back to do the docking with the wind in the back ! This means cutting the engine sooner as you should take the effect of the wind into account.

The couple of hours waterflying were truely a new great experience. Something that tastes like more ! 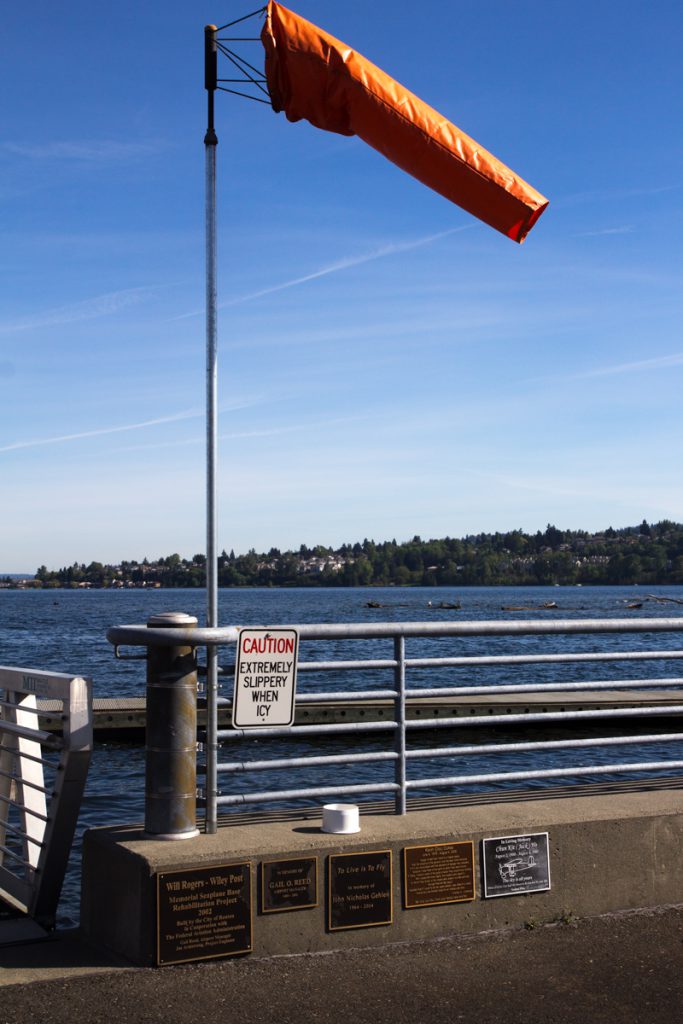 And it is practiced heavily in this part of the world. 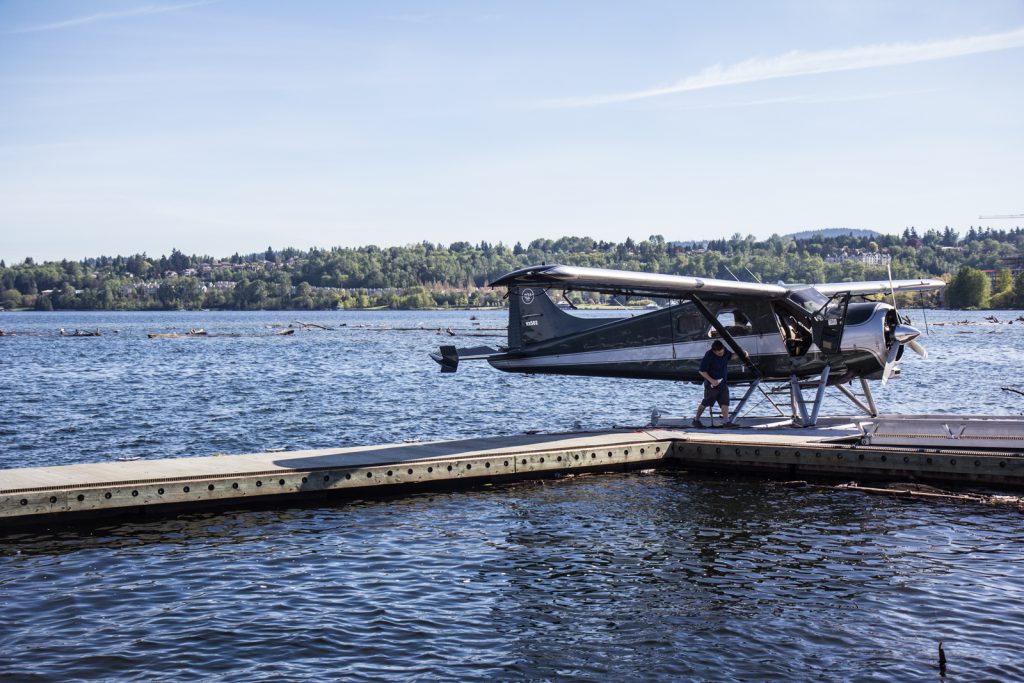