In 2013, I re-made myself member of the Aéroclub de Rouergue on the airfield of Villefranche-de-Rouergue (LFCV), a small provincial town in the department of the Aveyron in the southwest of France. They have a fine Robin DR-400 airplane that I longed to take on a long flight in the south of France. My plan was to fly to Villefranche to somewhere in the Provence.

But first, I had to have myself checked out by the local flight instructor. This was a thorough check-out, also because this airfield is located in the middle of the town and has a rather unusual approach segment close to mountains and buildings in this beautiful region. 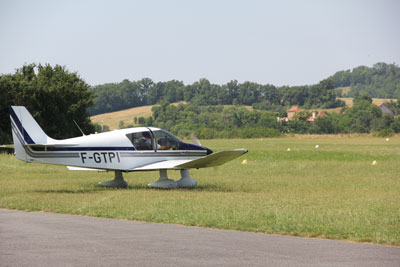 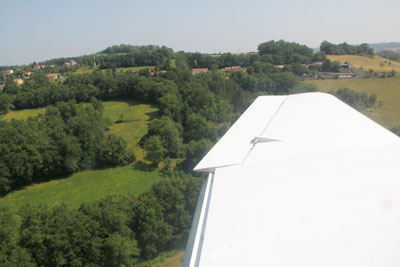 After the satisfactory checkout, my son and myself did a familiarisation flight to the aerodrome of Gaillac (LFDG), south of Villefranche with my son. We met some guys that were flying gyrocopters as low cost cameraplatforms. It turned out that they were shooting images of the Aveyron department for a famous french documentary about … France. 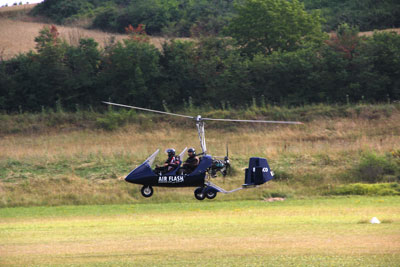 On the way to Gaillac, we passed the famous bastide town of Najac, with a gorgeous medieval castle. 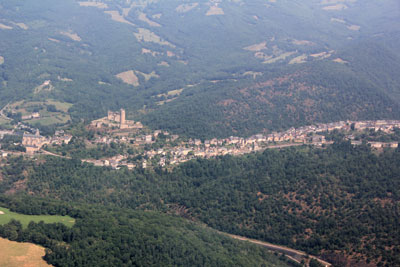 The next morning we got up very early because it was forecast to be a beautiful hot day, and we wanted to be back by the afternoon from our planned Provence trip. The trip was planned to last 2 hours each way, and we choose the aerodrome of Fayence (LFMF), west of Cannes, as our destination. That morning was one of these perfect mornings: misty, sun, no heat, mysterious: this would be a perfect trip ! 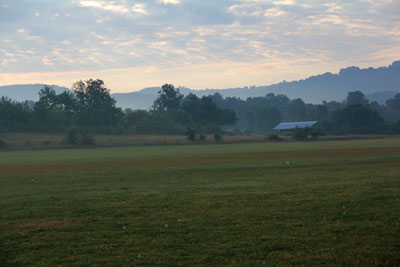 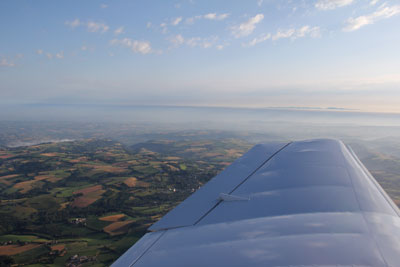 We took off and headed east. The valley of the Aveyron river passed under our wood-with-cloth wing. We passed the craggy lake Lac de Pareloup. And of course, we could not miss the famous huge Viaduc de Millau. Then we crossed all of the rugged terrain of the Cévennes from west to east: quite a spectacular view! 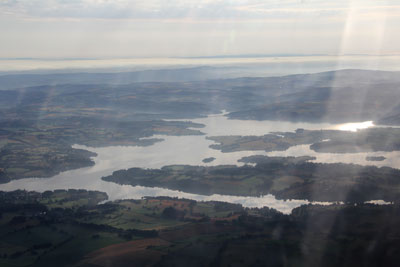 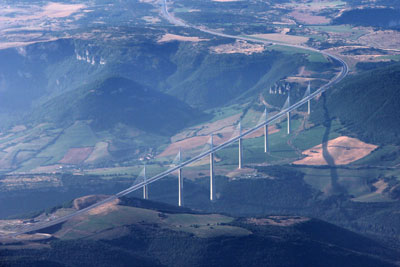 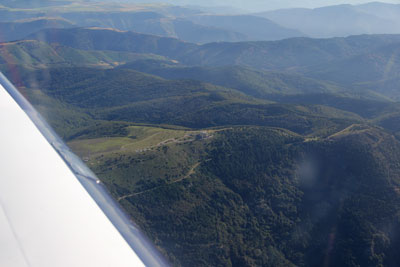 As soon as we had passed de mountain range of the Cévennes, we knew that we were in the Provence ! We crossed the Rhone river in Avignon. Far up north, we could see the outline of the well-known Mont Ventoux. 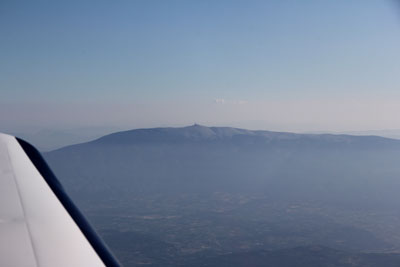 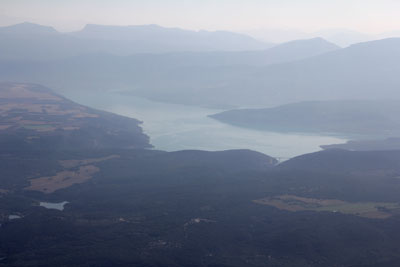 We passed south of the Lac Sainte Croix. French ATC helped us out very well as they announced which zone were active or not: this was a VFR flight, and airspace in France is notoriously complex.

After the planned two hours of flight, the airfield of Fayence came in sight. Three parallel pistes came in sight, and we opted for the southern one (the one on the right) as gliders ops were under way on the other two runways. This didn’t go very smooth because while I was on short final (and properly announced in French on the correct frequency, doing the correct circuit), a ULM cut in front of me and landed. I had to do a last minute go-around and break to the right to avoid landing behind the bugger in front. 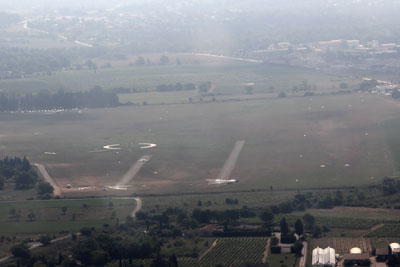 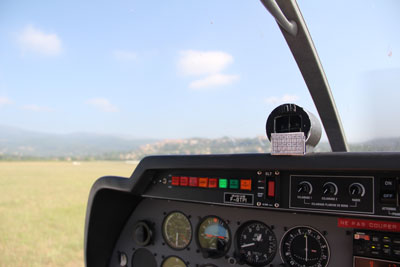 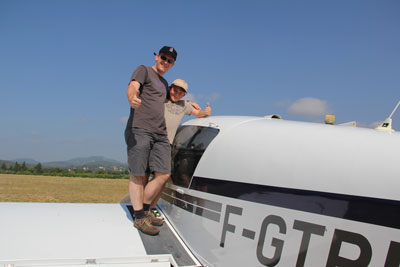 On the ground in Fayence, we bumped by co-incidence into an old colleague of mine. He is now the Chef-de-pilote in the gliders operations in Fayence. 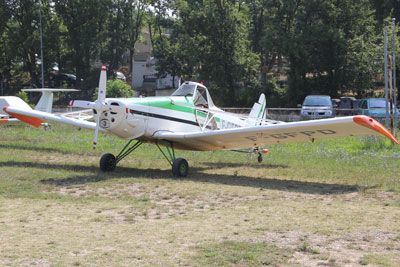 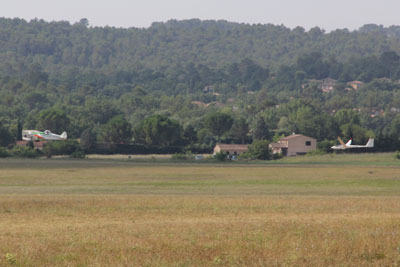 After a chat, a Coke and a visit to the toilet, we took the air again. We passed over the Lac de Sainte Croix again, and across the historic city of Avignon along the Rhone river. 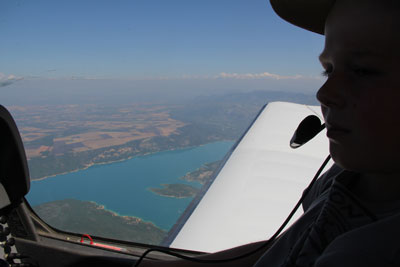 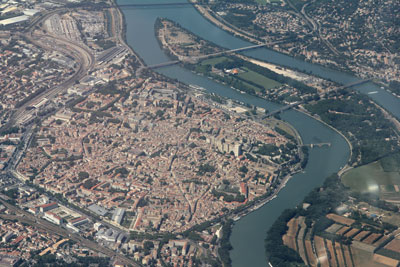 The sun already started to burn down on the landscape gliding under us. We passed the city of Uzès, and the aerodrome of Alès near Vézénobres where I flew a couple of years ago. 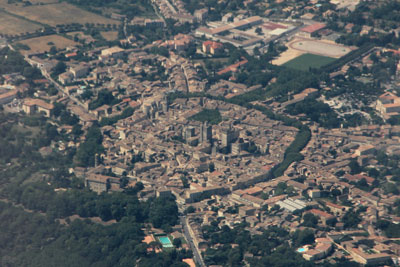 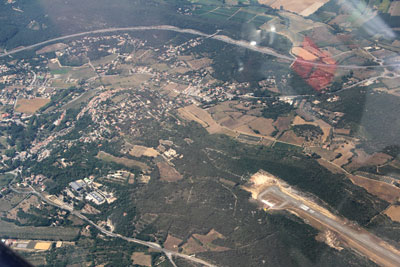 After crossing the Cévennes again, we were soon back in the familiar surroundings of the Aveyron. After a while, we got the grass airfield of Villefranche back in sight. 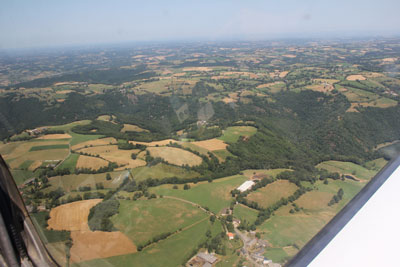 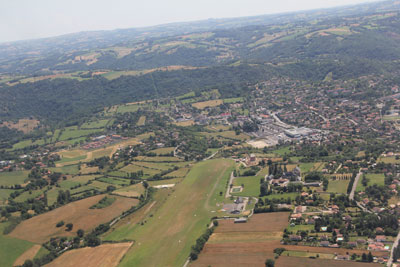 We landed uneventfully and as planned. We had seen a magnificent part of France ! 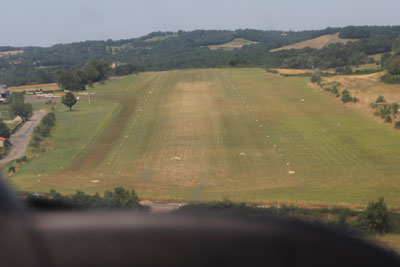